Is this a known issue?

Hi, can I have some pictures that'' Linked Deco Unavailable for current firmware''?

What are the model number as well as the operating system of the Samsung phones?

Please try to turn off the Mesh technology on the  Samsung phones to have a look;

Thank you and wait for your reply.

@TP-Link I get the same error message as everyone else in this thread on one of 3 P9s when running Deco on an Iphone XR. Interestingly, the third P9 gets its signal not from the equidistant cabled P9, but from this one that uses powerline.

@Dagster I have the same issue on a Samsung QLED TV.

Hi, For the Samsung QLED TV, Did you mean this: 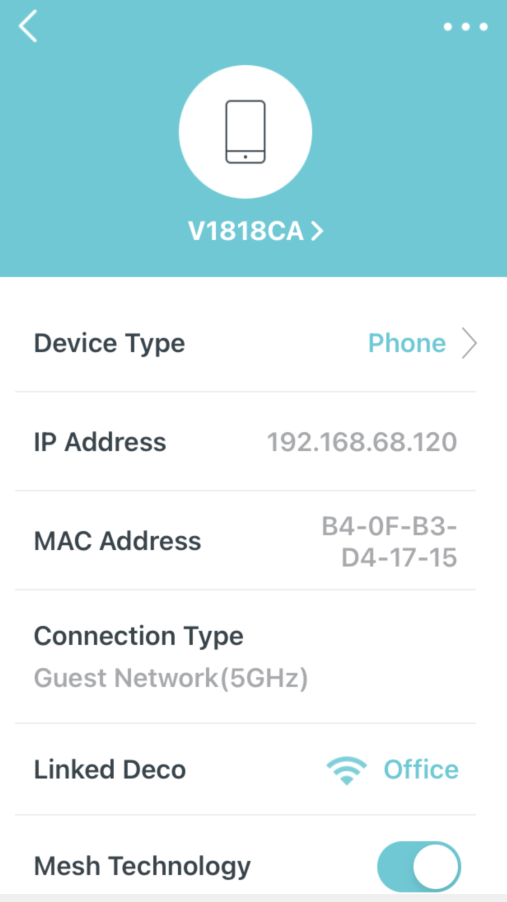 Here are some suggestions for your reference:

1.turn off the Mesh Technology on the TV;

2.turn off the fast roaming on the Deco APP;

Something is clearly wrong.  Yet the app assures me when I test them that the extenders are working well.

So there are apparently 2 issues.  1) I should be able to tell which node a device is connected to, and 2) some of these devices should clearly be connecting to other nodes.

I should also be able to tell through the app what the strength of the signal it's getting from the other devices.  Also, there should be something in the app that allows me to look at devices by unit.  Not one-by-one by checking each device in the device list.

@flipster Ok this is interesting.  Took my phone outside the front of the house, which is where the security camera is.  Farthest away from the base unit, 60+ feet and through several walls.  My phone said it was hooked up to the main unit.  It did not have a full signal.  I walked away from the house and watched it drop and drop.

So I decided to try a test.  I turned wi-fi off on the phone.   Turned it back on a few minutes later, and it came back with a full signal.  I walked another 30 feet to the mailbox and *still* had 2 "bars".

So whatever part of the code that figures out what you are connected to has some serioius flaws, I think.

Very frustrating not to have this tool giving me the information I want.

Hi, the current firmware(1.0.7) of Deco M3W does not support displaying the linked Deco and connected clients, and later a new firmware would be released to support this feature.

And as for the second issue that devices are not always connected to the nearest Deco, you could have a look at this link:

Why my clients don't roam/connect to the nearest Deco node?

And you could try to turn off the Mesh technology on the Deco APP for these devices to have a look.

Hmmm.  When I first got them the M3's WERE able report which devices were connected to them.  I guess that broke with an update somewhere along the line.

Disabling mesh for a particular device seems to be the smart way to go about the ones I'm talking about, especially the camera.  It doesn't move.  I think when I set it up it connected to the main unit and just kept trying to connect to it even after I installed it. The others all seem to have good enough signals from the main unit -- although I will say that when I first got this system it seems that different devices did choose the deco one would think it would choose by location (I could tell, because they reported it correctly).

The reason I started looking recently is the camera kept getting disconnected and I saw it usually had a very weak signal.  Which is why it's really good to know which its connecting to.

The rest I don't really care as long as they have a good signal.

I have the whole system set to auto-update firmware.  So I should see it when it comes along.

I hope it's relatively soon.