Yes I have latest firmware. Yes I have gone through every troubleshooting method with phone support. Yes I had to pay you to replace a faulty product with what is now my second faulty product. Honestly charging me $15 seems much like a scam. This is an issue that has been brought up several times by several people yet each time you act like it is something new. I just want to know if you guys even plan to fix this or if I should cut my losses and take my business elsewhere. I do know I will not pay $15 again to ship this paperweight back to you.

Hi, thanks a lot for all the details, please keep monitoring the performance of the latest 1.1.1 firmware and get back if there is still an issue, thanks a lot.

now i made this settings 2.4 and work now after reboot. 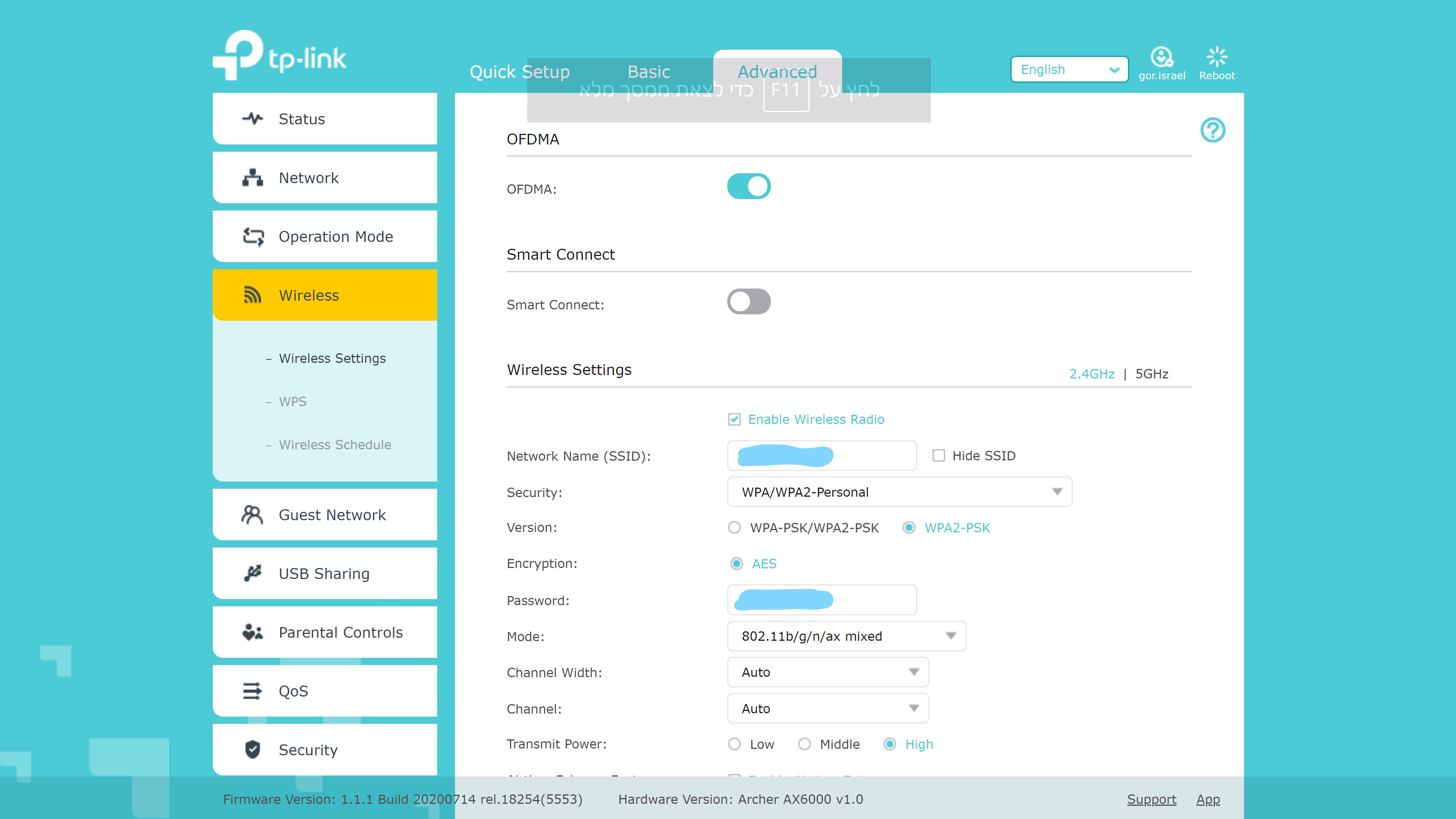 Adding my name to the list. Just bought this modem and already regret it for the same problem. Hopefully a fix can be sent out sooner rather than later

Add me to the list as well, I read the reviews on amazon and they warned me that around 6 months this thing takes a poo. Here we are, and yet no answers for the last three months of people posting on this post alone. Does anyone have an answer besides turning off AX....that's why I bought this router....its for the AX and to run my smart home devices and cameras. It doesn't show any strain from running it so why the fk would it quit!

Try a factory reset...when it comes back to life DO NOT change any settings except your wireless passwords.

Give a separate password for 2.4 and 5g. Don't even change the network names.

After you've done this check you can  access the both bands then reboot.

if it works ok  for a while, if you want to change any settings, only change ONE at a time , save then reboot and monitor.

This is how i manage my AX6000 now and speak as you find it's faultless now.

@bowb4myfeet   Had the AX6000 for less than a year now, 2.4ghz wifi went out today and i read through all the forums and tried everything.  Looks like buying new router, and it isn't going to be tplink.

@Cawsie Did it and does not resolve the problem, my 2.4ghz wireless network can't be seen.  Worked for almost a year, haven't done any changes on router or network equipment, just stopped working.  Noticed when i was unable to access any of my wifi lights

@Ripp Honestly, I gave up on this router shortly after writing this post. TPLink owes me $15 and a new router. They are scam artists and should stop selling this defective product to people until they fix it. I bet you they never own up to the defects of this product. I bought an Asus ROG rapture AX11000 and have not had any issues since. I refuse to even give this tplink router away. I don't feel like giving someone else a headache.

I haven't given up on the thing, mostly because I'm traveling extensively (who knew there's a pandemic?) and the last thing I want to do when I get back from an excursion is to muck around with this thing. I just left the Mrs with instructions on how to power cycle it when it goes wonky.

I'm still thinking (convinced), although I have no exact proof, the problems have some/everything to do with the number/quantity of devices I had on that band. I suppose it could be one IOT device, but other than my irrigation system, I have "multiples" of all other devices...TP-Link/Kasa plugs, Blink cameras, Ring cameras, Wyze cameras/plug/lights, Google Home, (too many) Alexa devices, etc. Unfortunately, most of them are 2.4 only, so I don't have a great deal of options. When I was experiencing problems, I had 60+ on that band (no exaggeration). I re-introduced an old Asus AC firewall as an AP, broadcasting another 2.4 band and a different name, split the devices between the two and I haven't experienced the same exact problems as before. I still experience slowdowns/lag on a regular basis (only on 2.4) while accessing and managing devices, but it remains nothing more than a nuisance at this point.

I've given consideration to other devices, TP-Link and competitors, but I require additional switch ports (more than 4, but less than 8, so introducing a separate switch is silly -- in my mind anyway). I like some of the ASUS 8-port devices (and I miss some of the features that product offering brings), but the notion of AX, Wi-Fi 6, Wi-Fi 6E and whatever comes next makes me hesitant to throw that kind of money at a device during this feeling out period.

It's a shame TP-Link failed to impress me with this router -- I really did want to love it, but I guess they can't all be good at everything. Still, of all the smart-plugs/devices I've tried, tested and tinkered with, their Kasa line has been (and still is) ROCK SOLID.