tp-Link RE450 V2 make the WIFI signal disconnected whenever plugged!!

Greeting All and I'm glad to be a member.

I have a serious problem with RE450 V2 devie. The problem is whenever I plugg it is the location that is between the main router and the rooms to stregnthen the WIFI signal, after a minute or so, the whole WIFI signal get cut off and no signal would be available. I set the device using all stated ways, 1- setting using WPS way, 2- Manual setup by logon to the web address 192.168.0.254 and completed all steps. Yet didn’t same problem presist.

My router is Huawie Home Gateway Model HG658 V2 from SAUDI STC which offers on;y 2.4GHs and during the setup, I disapled the 5.0GHS ver.

I have no clue and looking for any support.

Hello, welcome to be one of member on TP-Link forum!

We will try our best to help identify the issue and solve it.

Since you said the same problem didn't persist yet, you can try to provide the below information when the issue happens next time.

1. The whole Wi-Fi signal in your house will be cut off including the Wi-Fi from the main router, right?

2. Can you check if the issue is related to the specific position where you plug the extender OR the issue will also happen even if it is plugged next to the router?

3. May I know if the router and extender have the same Wi-Fi name?

Are there any error messages? How about the lights' status on the extender?

5. How do the connection recover? By restarting or automatically?

6. May I know when and where you bought the extender? When did the issue happen?

Your reply would be much appreciated.

First let me correct my typo "Yet didn’t same problem persist. "   what I actually meant is that the problem which is WIFI signal got cut off still occurred even if I follow up the different setup options.

For your questions, I have provided the answer as below

1. The whole Wi-Fi signal in your house will be cut off including the Wi-Fi from the main router, right? No. Once I plug the RE450 after setting it up, the whole signal gets cut off from the locations near the RE450 and beyond, but the room contains the router, the signal is ON and working. This happened if I made the SSID name of the RE450 the same name as the my WiFi SSID name. If, however, I select a different SSID name to the RE450 and I tried to connect  to it after I entered the Password (same as my source WIFI), the RE450 SSID will state no internet access. This even if the RE450 plugged adjacent to the router.

2. Can you check if the issue is related to the specific position where you plug the extender OR the issue will also happen even if it is plugged next to the router? It will happen if even RE450 plugged very close to WIFI router.

3. May I know if the router and extender have the same Wi-Fi name? I used both. If I select the same host SSID name, and I plug the RE450 after setting, the whole signal gets cut off and I got a message stating internet is not available. However, if I select a different host name, I can't connect to internet using the RE450 specific SSID and I get internet is not available even if I supply the same password.  However, I can connect using the source WIFI SSID. For example, I set RE450 as TKTLAN_2.4G and my source WIFI as TKTLAN.

4. Cut off means that you can connect the two devices' Wi-Fi but can't connect internet OR you can't connect either Wi-Fi from the two devices?  I can see both SSIDs if they have different names and I can connect to them. But when I connect to the RE450 SSID while it has a different name, no internet signal will be available. If, however, I named the RE450 the same name as my source WIFI, the signal gets cut-off from the locations where the RE450 installed and beyond.  Also, if I called the RE450 a different name and I tried to connect to it, it will asks for either a PIN to enter, which I don't know what is it, or a security key where I enter the same WIFI password.  But still no WIFI connection is available using RE450 SSID.

Are there any error messages? How about the lights' status on the extender? No error message. Both RE450 devise WIFI indicator signal and 2.4Ghz lights are blue and steady.

5. How do the connection recover? By restarting or automatically? By unplug the RE450 in case I use same host SSID at the locations where the RE450 plugged and beyond.

6. May I know when and where you bought the extender? When did the issue happen?  Bought it a year ago from a computer accessory shop in Saudi Arabia. 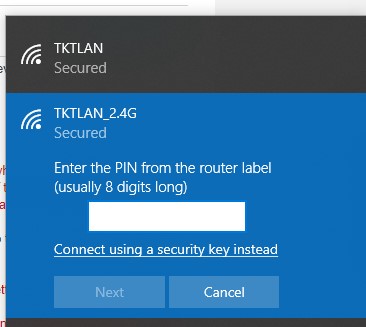 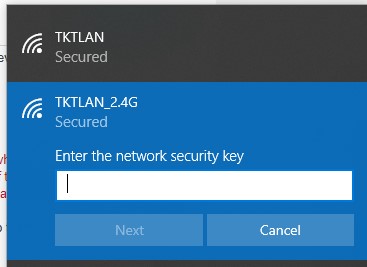 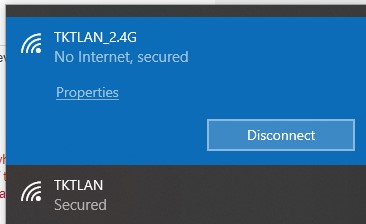 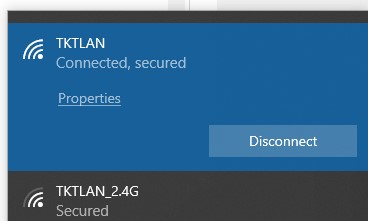 Thank you very much for your time and patience.

Since you have bought the extender for a year, did this issue just happen recently, or it is going on all the time?

And if you kept the different SSID, when the internet disconnected again, have you ever checked the IP address and gateway on the computer to see it is assigned by the router or the extender？

May I know the frequency of the dropping issue?

And if possible, could you please try to set up the RE450 as the access point mode to see if the Ethernet connection from the router would get much better?

Thank you and have a nice day.