This Article Applies to:

All the Deco models

Some customers may get a warning of DNS Hijacking after running Wi-Fi Diagnostics on the Deco APP -> Deco Lab -> Wi-Fi Assistant after they update the iPhone to iOS 14.5 version. 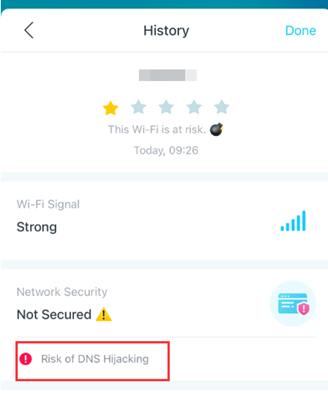 When determining whether there is DNS hijacking, Deco APP (2.7.4 and earlier version) will send a DNS query to a test server, such as google.com. After the APP receives the response, it will compare whether the returned URL address and the requested URL address are exactly the same. If they are different, the Wi-Fi Diagnostics result would warn the Risk of DNS hijacking.

A new Deco APP version 2.9.6 has been released and please keep attention to the new version release on the Deco APP;

Please also feel free to let me know whether the issue has been fixed on the latest Deco APP.

been on to my service provider about this before finding this. I still have the problem but reassured there is no issue. Will await for the update.

Hi, the latest IOS APP 2.9.6 has fixed this issue already, and have you installed the latest APP?