My smart plug says local only can not connect to alexa

I had this problem this morning and was able to resolve it by turning off my Internet/wireless router and turn it back on.  This must have released the IP address and assigned a new one that allowed the switch to connect to the network.  You might have to try this a few times ... but it worked for me.

@Carl I see no such setting. Does this require a particular version of the app?

no app needed. You just physically unplug your network router, wait 10 seconds then plug it back in.  It will take a couple of minutes for all your devices to connect, so wait.  Then go on the KASA app and see if the local indicator goes away.

Are you talking about changing the DNS addresses?

not sure if you were addressing this question to me, but what I'm suggesting is to reboot the router to get it to release the IP address if there is  a conflict with another device address that keeps the switch/device from connecting to the network.  As I'm sure you know, that's step 1 in troubleshooting! Lol

Hello no i was addressing AHP's last comment to me.  I wasn't sure which one of my replies they were referring to.  Power Cycling is as you said one of the first things to try of course.  Though I always start with the golden rule "Always check the physical first"  You wouldn't believe how many times over the years I have asked a customer on the phone "Is it plugged in?"  and heard "Click!"  However, since this is dealing with wireless devices there really isn't any physical other than the connection to the modem.

The suggestion for the DNS change is that we have seen at time ISP DNS are less than stellar shall we say and that they sometimes have blocked routes.  When we have seen this and the user changes the DNS to a more accurate DNS like Google's or OpenDNS's the local only concern is resolved.

I've posted on this thread a number of times over the months/years but it's easy to miss other people's points if people don't read previous parts of this conversation, which is somewhat understandable as lot has already been written.

I have had the same problem that everyone else is having here and it went away completely (other than one older device that never worked EVER AGAIN) after I changed my router to a Netgear Orbi system. I have never ever seen the problem arise again. I did everything that people are still suggesting here... DNS.. Reboot... Change channel... blah blah blah. Nothing worked. New Mesh system and boom. All good and no looking back. It's depressing to watch people in this thread still telling people to recycle the power as it's almost as if all the good stuff already discussed is being ignored.

I wish you well in getting this sorted. Rather than pull your hair out for a solution, you could consider it a loss, as I did, and just spend £27 and get four new Tapo smart plugs and be done with it. They work fine on my system and I never get any issues and are full 13amp Uk. I suspect there is a hardware issue with some of the earlier H103s etc.. and sometimes you just have to go with the loss. TP-LINK don't care and have systematically ignored people's problems here and don't care to find a solution themselves. Why? Because there probably isn't one with some units. I bought their Tapo versions of these as they were recommended to me though I am very nervous about buying anything else from Tp-Link these days as when their stuff doesn't work, they go all quiet and leave you for dead. In fact I seek alternatives always now, other than the Tapo stuff which seems good as well as being smaller than the H103s

I've had this problem for a while now.  I have 20 plugs in my Kasa account, and half say local only.  However Alexa is still able to control them IF I am on my wifi network with my phone or talking to an Echo on my wifi.  If I am on cellular data with my phone, it does not appear I can control them through my phone through Alexa or Kasa.

No remote slider in the app.

Latest firmware on all.

I inventoried them all.  What I found is that all my older HS103 models work.  All my newer EP10 models don't.  It is really disappointing that the newer model plugs aren't working like the old ones. I just wish I noticed when I added the first newer plug(s) so I could have been buying the older ones as I went along. 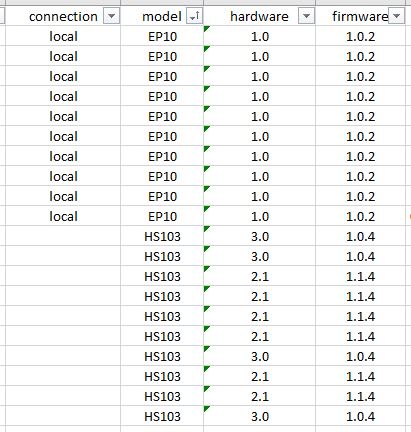