R1D2
LV6
2018-02-16 04:57:44
Posts: 4334
Kudos: 795
Solutions: 162
Stories: 3
Registered: 2015-12-05
Re:TL-SG108E upgrade freeze
2018-02-16 04:57:44
TL-SG108E/PE and TL-SG105E have a somewhat unusual way of processing firmware updates: they will reboot the switch before updating. If a firmware update doesn't complete (no page for uploading the firmware appears at all after the reboot or the firmware upload did fail before it could be flashed), it will remain in the "reboot for update" state even if power-cycled. This may appear as the switch is "hanging" or even bricked, but you can still access it. Even if resetting it to factory defaults the switch displays the firmware upload page if you connect to its web UI using the default IP.

Anyway, I just updated a TL-SG108PE HW v1.1 with latest firmware (v2) and it did flash the firmware correctly. There was no need to reset it to factory defaults, it kept its static IP. DHCP makes no sense for stationary devices such as switches or routers.

Note that the progress bar might stop before reaching 100% what means that the switch did process the flash operation faster then the web UI expected. In my case, it stopped at 78%:

After the reboot of the switch with the new firmware the web UI doesn't reload automatically. You have to manually request the web UI again.

Well I assign by mac on the DHCP server so it's easier configuring afterwards especially when you need to update dns servers for example, .. so they do have a static IP only assigned by the DHCP. 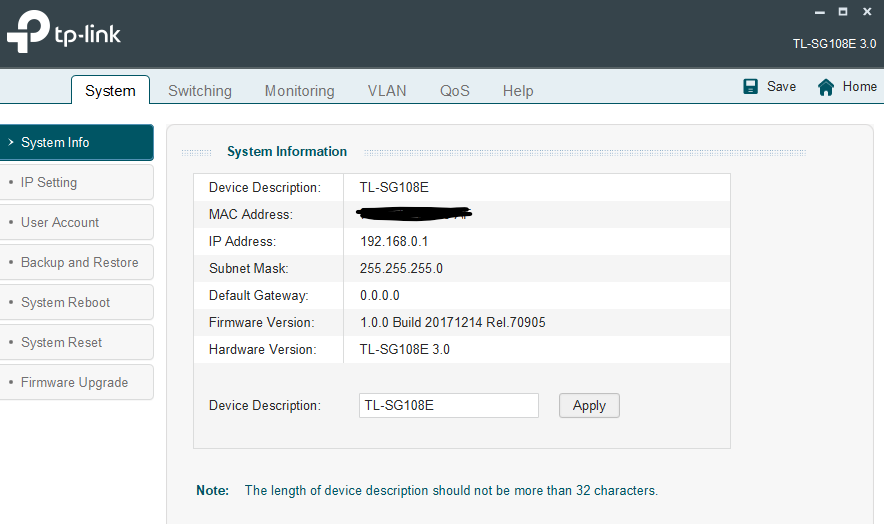