CPE510 configured to Client mode but no internet

I have a CPE510 which I configured as Client mode, the CPE connects to a Dev AP signal and receives the signal just fine. The network is configured to DHCP so when I set my laptop to DHCP, it received the correct IP's, Gateway, and DNS information but I cannot get out to the internet.

From my laptop, I can only ping the CPE510 and nothing else on the network.

I have upgraded the firmware on the CPE510, moved it closer to the AP, adjusted the CPE to receive it's IP information automatically(DHCP) but nothing helps. The laptop I'm using is a Mac but I have also tried a Windows PC and same result

Any help would be greatly appreciated!!!!!

I was so focused on the networking behind the CPE510 that I completely forgot about WDS.

The WDS setting was set to auto, once I disabled this, everything worked as normal and I was able to reach the internet from any end device that was connected to the CPE510

@J_peg, what's the distance between the CPE510 and the AP? What type of antenna does the AP have? Omni antennas? Indoor?

Can you post a screenshot of the CPE's status page (link quality is the interesting point here)?

@R1D2 Thanks for your reply

The CPE is about 5-6ft from the root AP. I unfortunately won't have a screen shot of the CPE until Monday.

Edit: The CPE and AP are both indoors so no antenna on the CPE.

You know that the CPE's antenna beam width is 45º only? It has been designed for directional links over very long distances, so it's almost always used outdoors. Minimum distance to not overdrive the remote receiver is about 10 meters, that's roughly 30ft.

What would you want to achieve with a CPE if used indoor over a distance of 6ft? The existing root AP should cover all clients around in the 30-45ft range already, shouldn't it? Or is the root AP a CPE, too? You need to provide more information about the topology and goal you want to achieve, so we can see what's wrong with the setup.

The purpose of the CPE is to provide network connectivity to some devices that do not have Wifi capabilities. The CPE is connected to a switch which then connects to some of the end devices. In production, the CPE will be about 30ft from the AP but I moved it closer to troubleshoot my connection issues.

There are no network drops in the area these end devices will go so I was hoping the CPE would sovle that problem.

There are no network drops in the area these end devices will go so I was hoping the CPE would sovle that problem.

This is an unusual setup for a directional link, but nevertheless it works for me. I had to test this with Test_Mode region setting, since in my country the channels used by my indoor AP are forbidden for outdoor use (your mileage may vary in your country). My root AP is a Fritz!BOX (FB), a popular SOHO dual-band WiFi router. Distance between FB and CPE is ~12ft, two big walls in between.

That's what I did set up starting from factory defaults: 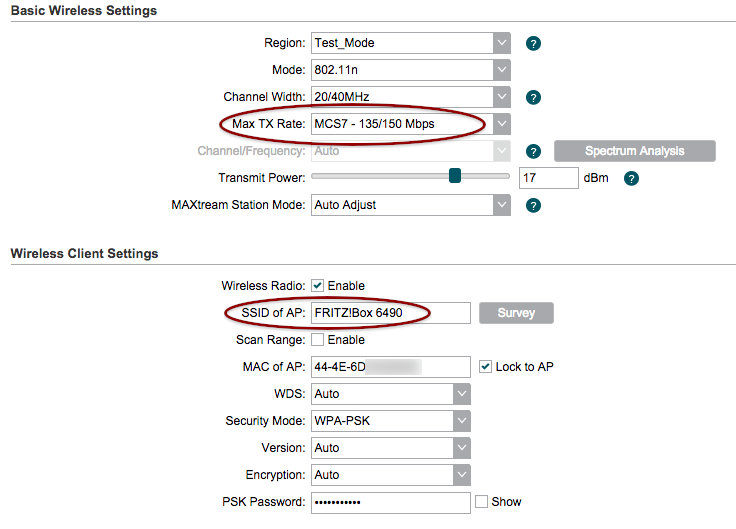 No other settings are required for initial setup of this topology. 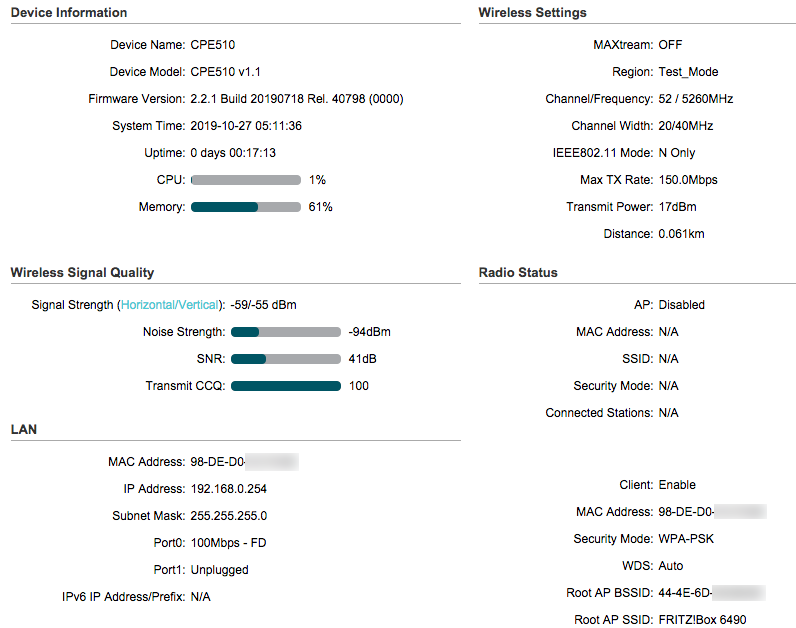 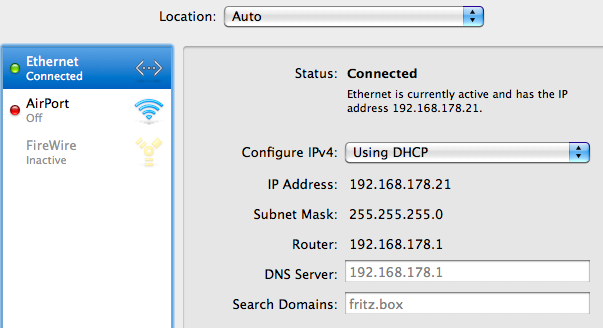 I'm not sure what you're doing wrong or what settings you use for your router's DHCP, but it definitely is not the fault of the CPE510. Maybe a wrong setup of your DHCP service, your UBNT AP or your CPE. Just try the steps I did and check whether you will receive a DHCP lease. If not, ping the UBNT AP from a device wired to the CPE and if the ping works, but still no DHCP lease received, it's almost certainly your DHCP which fails for some reason.

Changes are that the malfunction could also be caused by a very weak WiFi signal. I once had a case where link quality was so bad but good enough for small ICMP packets, so I could ping other devices successfully, but a data transmission with larger content always failed.

Further problems I see with connecting a CPE510 to an indoor SOHO WiFi device with omnidirectional antennas:

To summarize: connection from the CPE to a SOHO device might work, but the usual hassle-free way to connect wired devices to a network through CPEs is by using two CPEs as shown below, which will avoid all those possible problems:

If you just need a WiFi device which can be used in client mode to remotely connect to an AP indoors, I still don't understand why you did choose the CPE510. Any SOHO router could do this if using free OpenWRT firmware. For linking other devices to an indoor AP I would use another cheap indoor-only AP, which often comes with a 4-port switch built in already.

For outdoor links I would only use CPEs as shown in the diagram above even over a very short distance of 30ft – just to achieve a free line of sight for a reliable wireless link.

Take a look at my configurations below, I have double checked my DHCP pool and all is working as it should. When I connect my laptop to the same AP and SSID I receive an IP just fine but when connecting my laptop to the TP-Link, that's when the DHCP request fails. 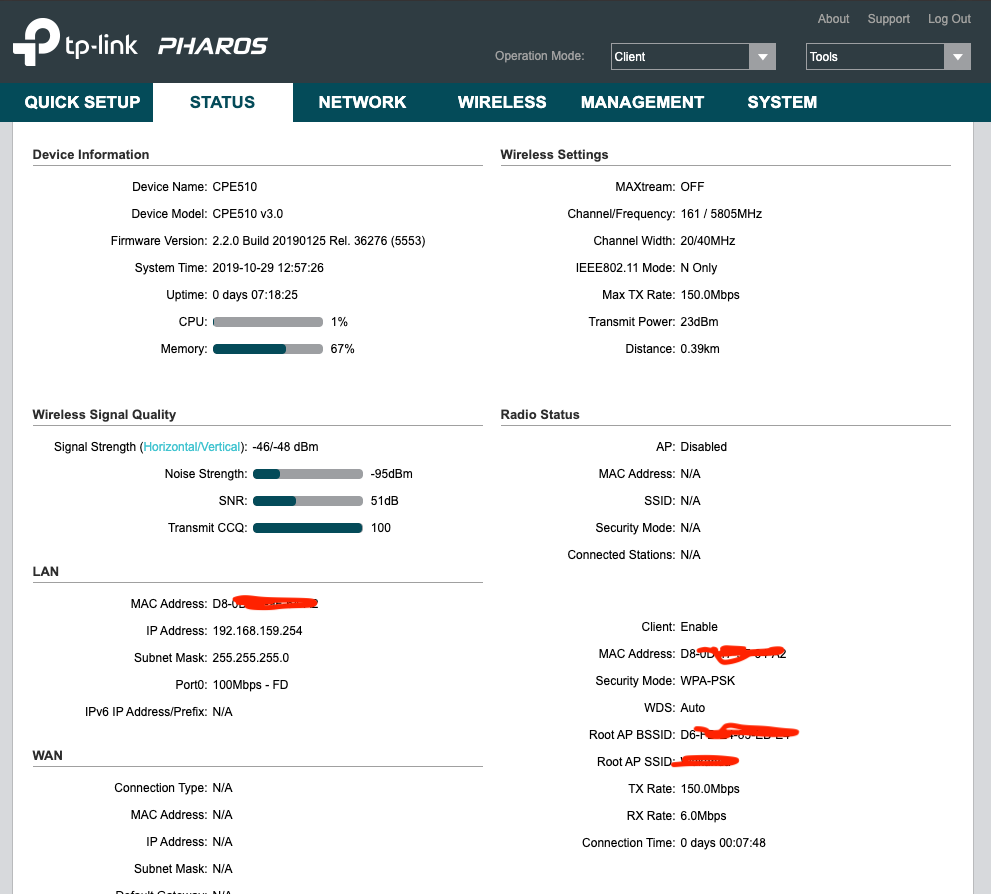 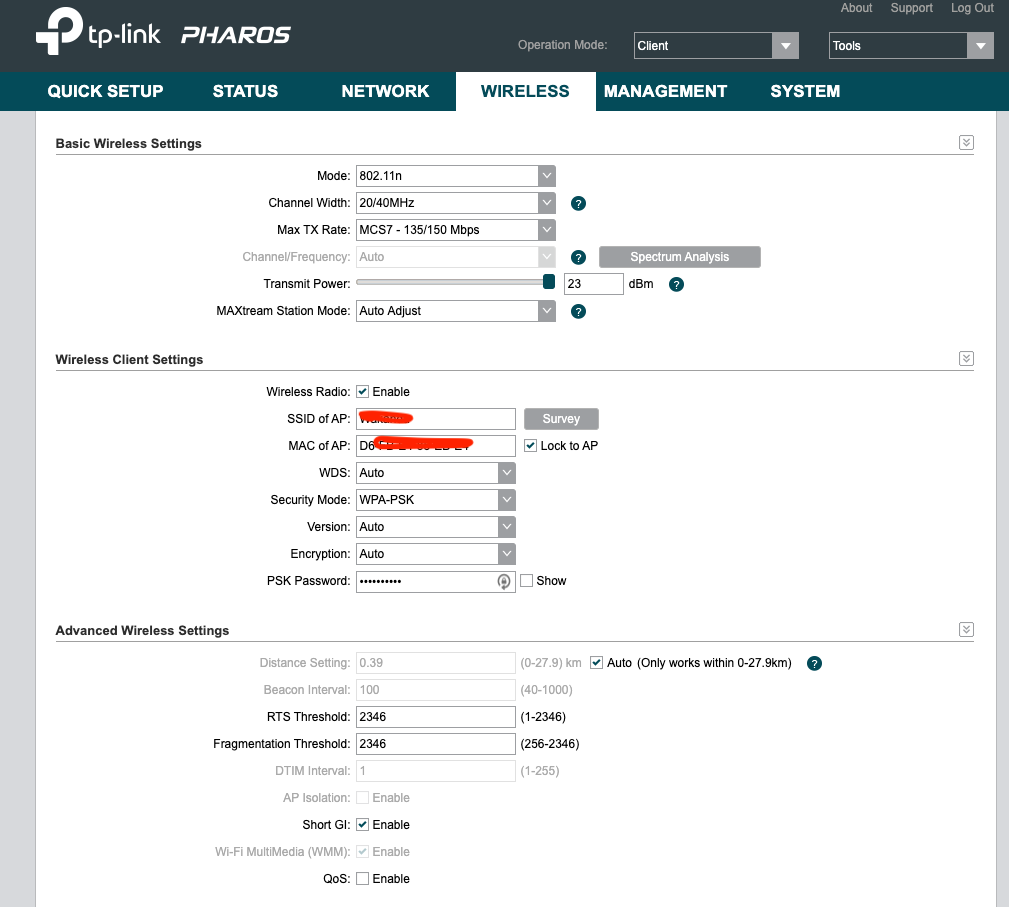 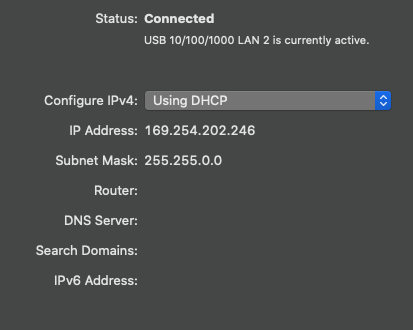 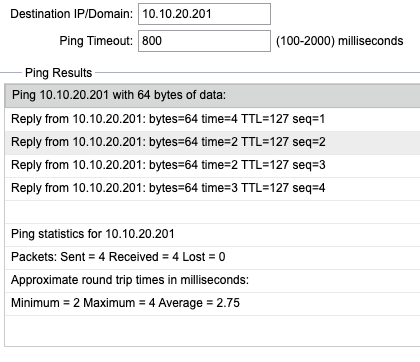 Why is the DHCP server in another network, do you use a DHCP relay? How do you assure that the DHCP server's and root-AP's/CPE's broadcast domain is the same?

In my example I do this by using the DHCP server's network and broadcast domain also for the interface to which the root-AP is connected.

The management LAN the root AP is assigned to is 10.10.20.x, I have inter-vlan routing configured so my management LAN can communicate w/ all other networks.

Yes, I have DHCP relay configured.

I have tried the above example w/ my management LAN and in that scenario I am able to receive an IP from my DHCP server and I see my laptop is assigned to the correct domain but I still cannot reach the internet. I only encounter this problem when putting the TP-Link inbetween my end devices and my root AP, which is what lead me to beleive it's the CPE and not my configuration.

I will try this again w/ my management LAN and post screen shots.

Setting the CPE to the same network as my root AP 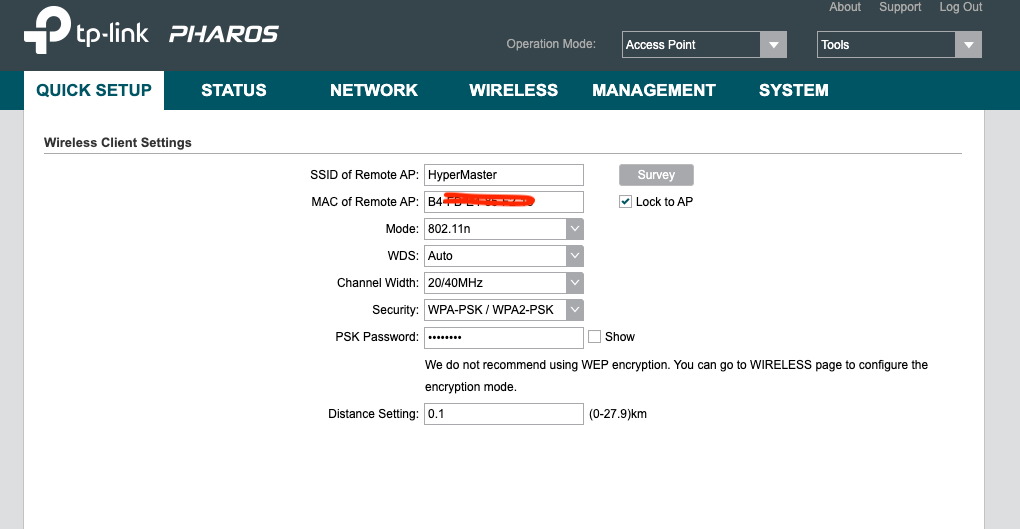 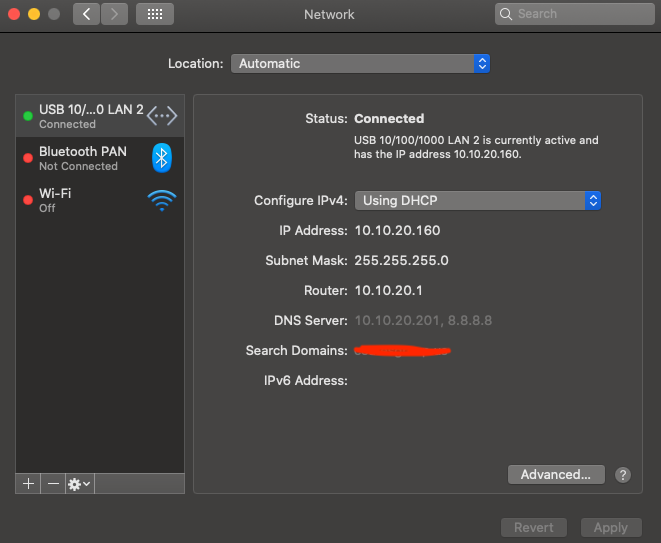 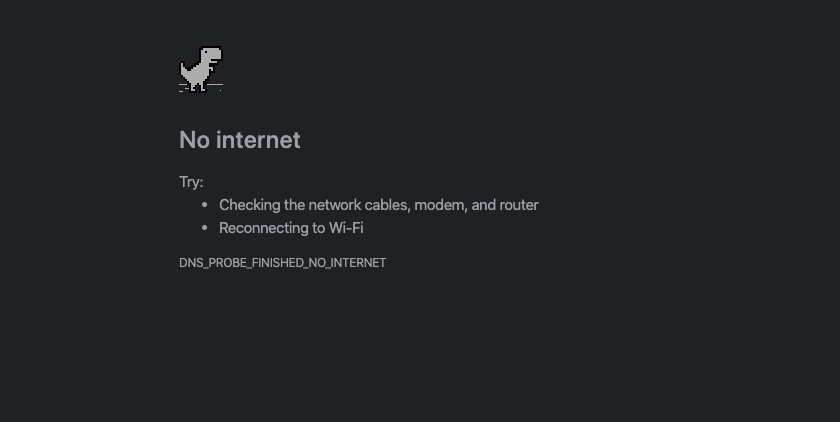 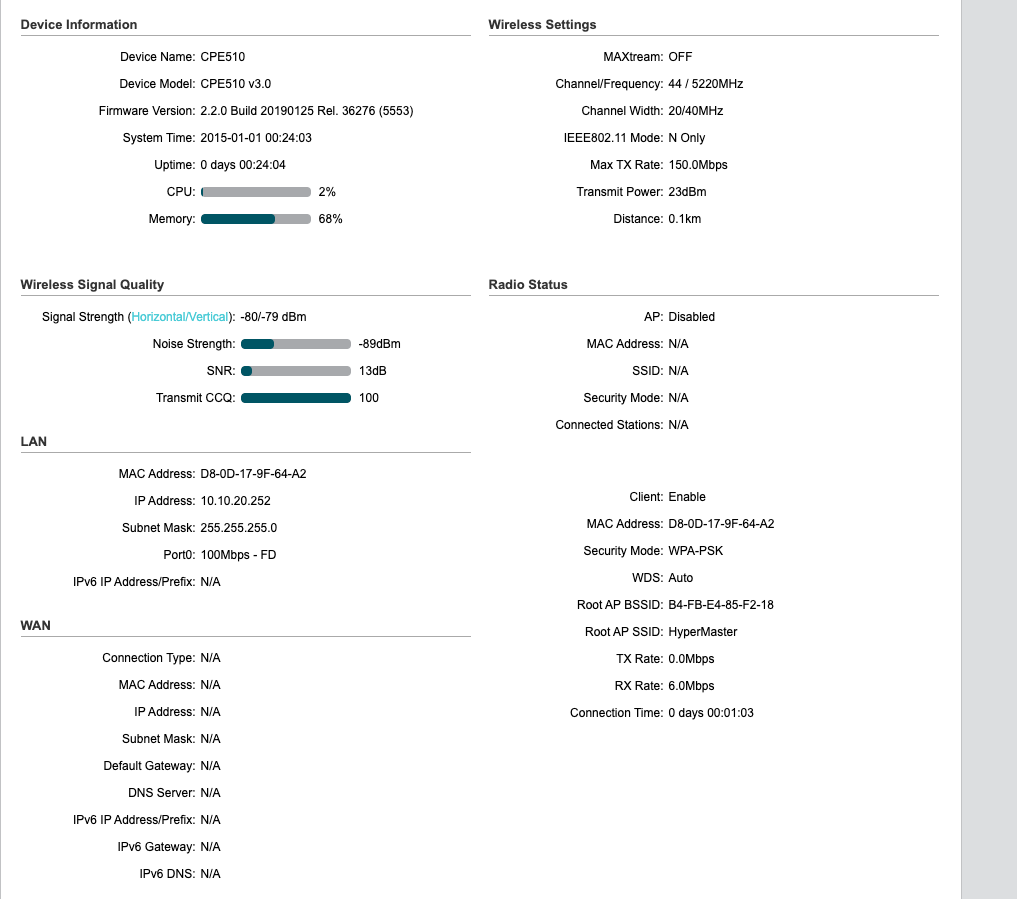 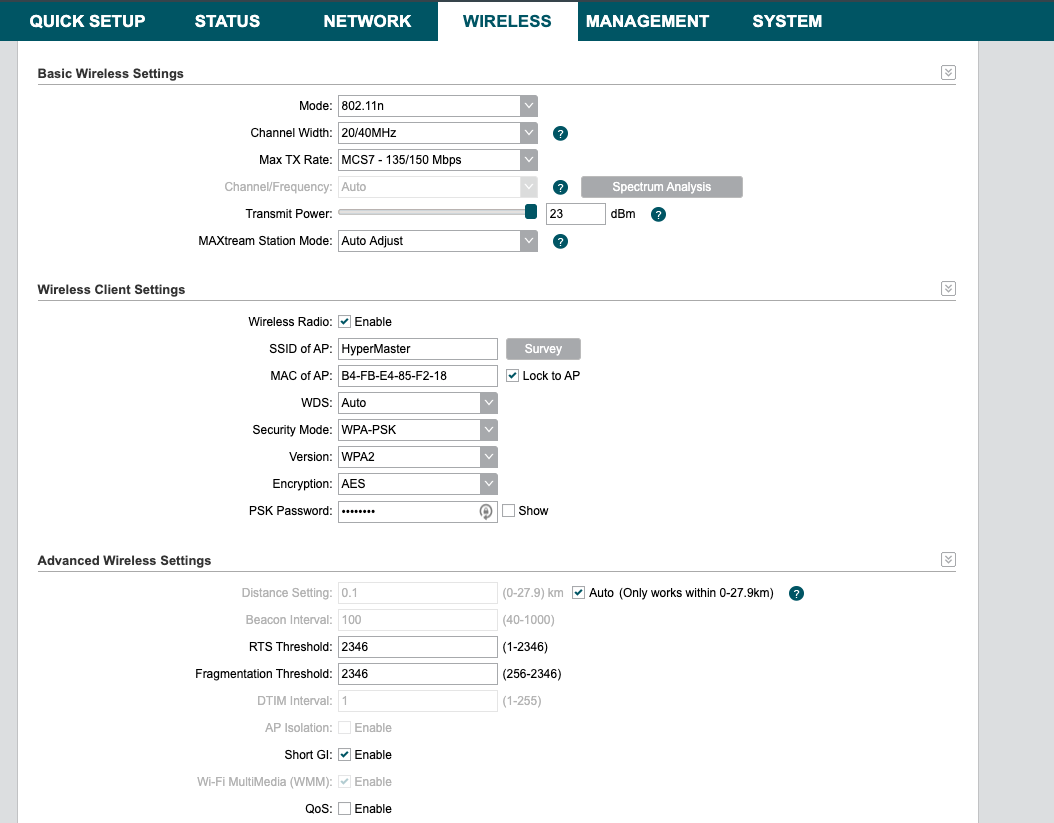 J_peg, see SNR 13 dB. That's a very weak wireless link. Compare that with my SNR of 41 dB (that's nearly 1,000 times stronger!) albeit there were no free LoS and two walls in-between. In general, a signal with an SNR value of 20 dB (that's ~ five times stronger as yours) or more is recommended for data networks.

So I guess that small packets such as ICMP will make it over the air, but larger packets do not.