I am unsophisticated regarding the technical details of this device so need an answer to the following: I want to use the cpe210 only as a range extender. If so, my understanding is that I can do so simply by connecting an ethernet cable between the device and my router, and supplying power to the device. (I'm not sure how the power is supplied.) In doing so, when mounted outside, I assume the cpe210 will transmit the wifi signal. Is my understanding correct? I assume in this application the use of a laptop is not required. Your help is very much appreciated. Thank you!

yes, your understanding is correct except that CPEs are not »WiFi range extenders«, but they are specially designed devices for directional long-range links between either a pair of CPEs (in a PtP sceanrio) or a base CPE and multiple other CPEs (in a PtMP scenario).

And it's not enough to just mount the CPE outdoors: you have to carefully align the CPE's antennas to each other's antenna under consideration of a fresnel zone clearance.

They are not suitable to »extend the range« for standard WiFi clients over neither long nor even very short distances.

Whether a a CPE210 or a CPE510 would perform better in your use case depends on what you want to achieve in what kind of an area (crowded, rural), over what distance (in km please), in what region (US or EU) etc.

@R1D2 Then I have the wrong product entirely. All I want to do is boost our home internet out to a building 200 ft away. I'll return the unit and find a different solution. Which is okay because it kills our internet for a day every time I try to set it up.

Then I have the wrong product entirely. All I want to do is boost our home internet out to a building 200 ft away.

No, you have wrong ideas about the range of a WLAN. For consumer WLAN equipment such as smartphones, laptops etc. 200 ft coverage is hardly possible except there is a free line of sight between an access point and the device. If those devices are used indoors, it won't work reliably b/c the consumer devices have much weaker antennas than those used by access points. This is not a technical issue, but ruled by regulatory provisions which do not allow to use the same signal power for a WLAN as being used for cellular networks.

200ft is pretty much at the limit of the range of standard consumer devices (smartphones, tablets, laptops). If used indoors, you won't get a stable link due to obstacles like walls etc. which attenuate the signal. It could probably work if the consumer devices are used outdoors at the remote location, but then you would use an omnidirectional outdoor AP such as EAP225-Outdoor: 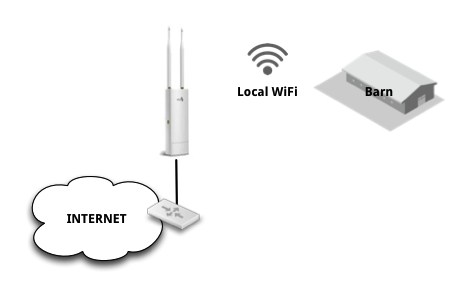 But this must be tried at the actual location since many environmental parameters will influence the signal quality.

For distances of 100 ft and higher I would use the first scheme above with 2x CPE510 and 1x EAP110-Outdoor (EAP225 if used indoors). We use such schemes to cover large areas on campsites/RV parks; see this story for a sample installation.

For distances of up to ~100 ft I would use the second scheme with 1x EAP225-Outdoor.

@R1D2 Thank you for sharing most valuable rely on cpe 210.

What you are doing requires 1 or 2 devices. At 200 ft outdoors  you can configure it as AP and plug it into your internet gateway/router. Very easy to set it up for that. If you need more signal you would need 2 units and configure them as AP and AP client. First solution is very simple to do second is not.

You can test your setup with one, configure as an AP and plug it into your gateway. Then connect with your cell phone wifi and watch the signal strength. Keep in mind these are directional so don't expect a signal on the back side of the device.