We have 4 conference rooms I'm trying to get set up using a combination of SG108e and SG108PE switches.  Our enterprise network is mostly Meraki equipment, and there is a Meraki switch feeding the SG108E in Room A via a "Trunk" port on VLAN1.

Due to a crazy wiring contractor, Room A needs to feed Rooms B and C, and Room B further feeds Room D.

Running VLAN1, and VLAN10.  DHCP is available via VLAN10.  Wifi access points (Meraki) are connected via VLAN1 in two rooms, and pull PoE from port 4 of the SG108PE switches.  PoE cameras and the occasional laptop will connect via VLAN10 in these rooms.

At the first switch in Room A, I can pull DHCP addresses on ports assigned to VLAN10, and I can ping out, reach websites, etc.  The wifi in this room does not function, other than providing an SSID beacon, and allowing connections.  No traffic passes.  Similar situation with Wifi in Room D.

I found this article, which helped a lot, but it does not deal with further downstream feeds: https://community.tp-link.com/en/business/forum/topic/105250

I wish the fix was simple -- like having the contractor run the cabling correctly, but that's not in the cards.  What am I missing that is (apparently) killing traffic from filtering downstream to the other switches, and conversely, from flowing UP from those switches to reach the rest of the network?  When I connect the LinkRunner to switches in rooms other than A, it generally will identify one of the Meraki access points as the closest switch.

Is this your topology? Which port is connected to AP? Is your Meraki switch's port trunk or not?

And do you configure SSID VLANs on APs? Does your router have VLAN interfaces settings? It seems your settings have something wrong. 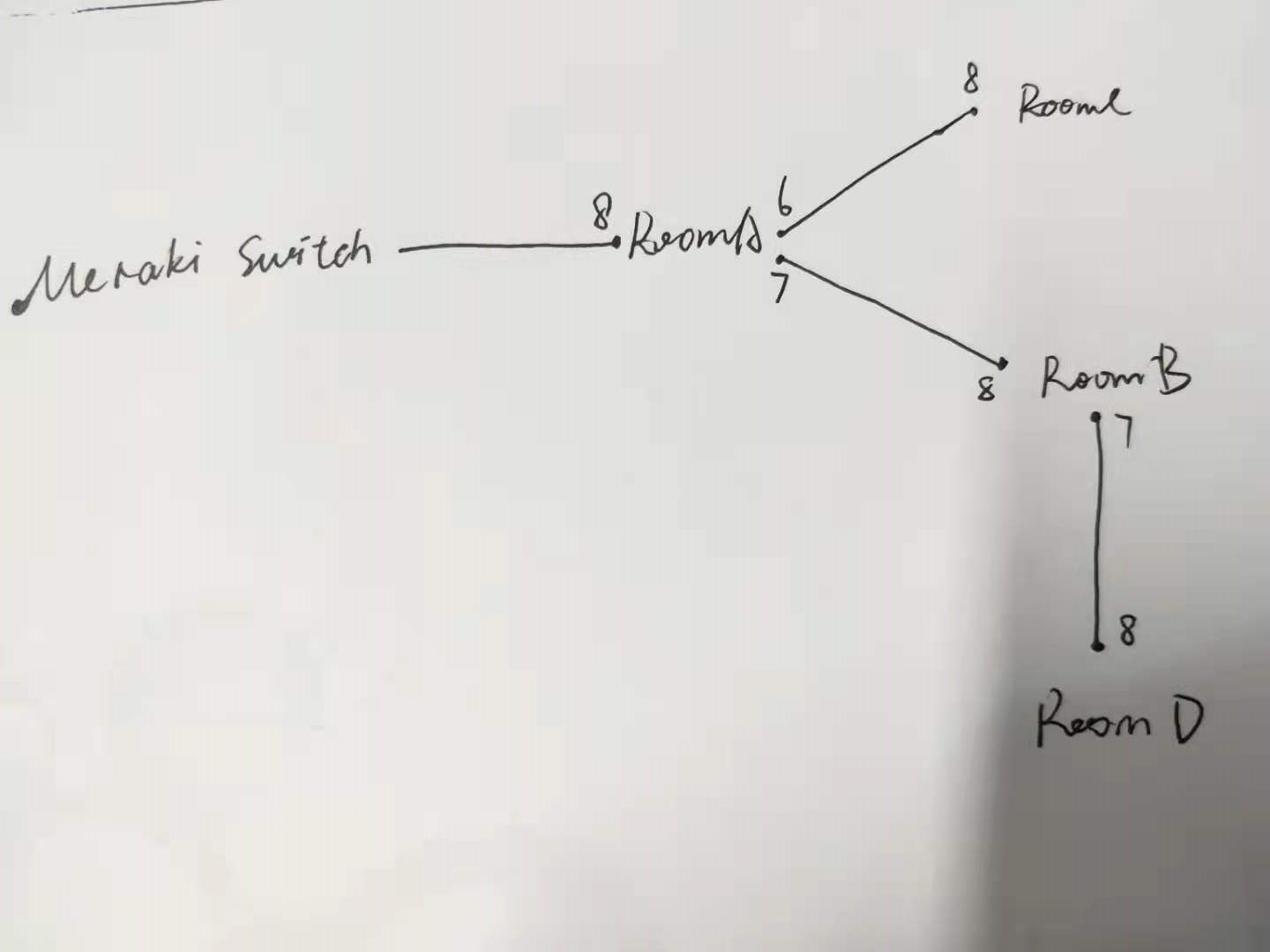 (Sorry, was on vacation for a few days)

Yes, that is the configuration.  Meraki feed is a trunk feed, VLAN1.

I have altered the switch configurations a little, bit, and added VLAN90 (our management VLAN).

I have tagged ports 7&8 on VLAN90 on all switches, plus port 6 on the one switch that has two downstream feeds.  I have also tagged port 4 for VLAN90 on the two switches that have Meraki wifi access points.

I can now see the wifi APs in the Meraki dashboards.  I am able to pull a DHCP address from the first TPLink on ports designated as VLAN10, but cannot pull DHCP from any VLAN10 port on the remaining, downstream switches.

Each switch responds to pings; but I cannot access ANY switch management via HTTP to the IP address.

My thoughts on the VLAN.

Creat your VLAN interface on your router. Make DHCP and VLAN tags for it.

Set up VLAN tagged/untagged ports. Make sure you set the correct VLAN ID and PVID on the switch. APs, routers, switches are those devices that can recognize the VLAN tag. So, you make sure you configure VLAN on them. And, tag them up on the switch port config page. VLAN1 should not be tagged. That's the default VLAN.

When you have a lot of devices that need a tag, you may mess up them. Take a small step at a time.

For the PCs, those are devices that can not recognize tagged packets, they should be on untagged ports. PVID should be the number that you want to use. e.g. VLAN10, your PC should use PVID 10, port untagged.