Since many devices are mobile, keeping a constant internet connection while devices are in motion is essential for Wi-Fi networks. Fast Roaming plays an important role in guaranteeing a reliable internet experience. This article helps you grasp the concept of Fast Roaming and how it works.

What Does Roaming Mean in a Wireless Network?

As you can conclude from the daily life, the signal that a wireless client receives from an access point (AP) will become weaker as the distance between the client and AP increases. When the signal becomes too weak, a client will need to connect to another AP, or the online experience will suffer. The term “roaming” refers to this connection shift from one AP to another.

If roaming takes too much time, your internet experience will suffer from long loading times and lag. Fast Roaming shortens the time it takes a wireless client to move from one AP to another. From the user’s perspective, the signal interruption when using a phone, tablet, or laptop will be unnoticeable because Fast Roaming makes the transition so quick. 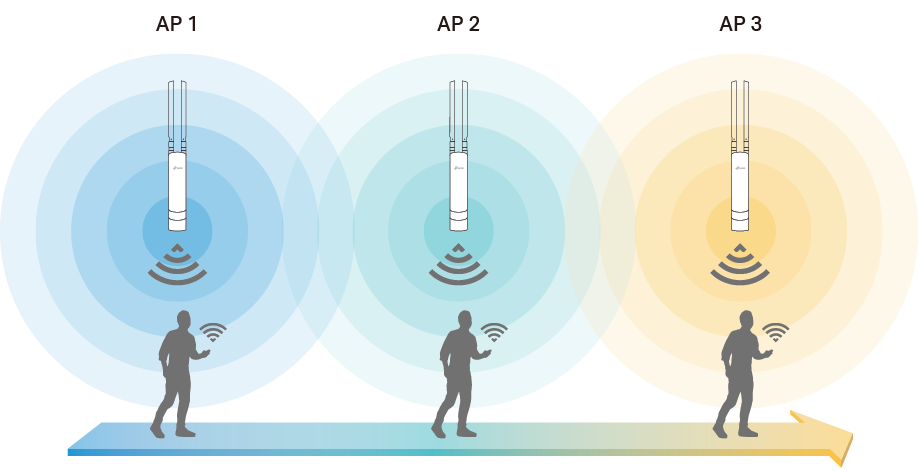 How Does Traditional Roaming Work?

A brief description of the roaming process would be: when the signal a client is getting from an AP gets weaker than the threshold, the client probes all nearby APs that are available as roaming targets and waits for a response. After comparing and analyzing all of the response signals, the client will shift to the best available AP. The picture below should help illustrate how this works. 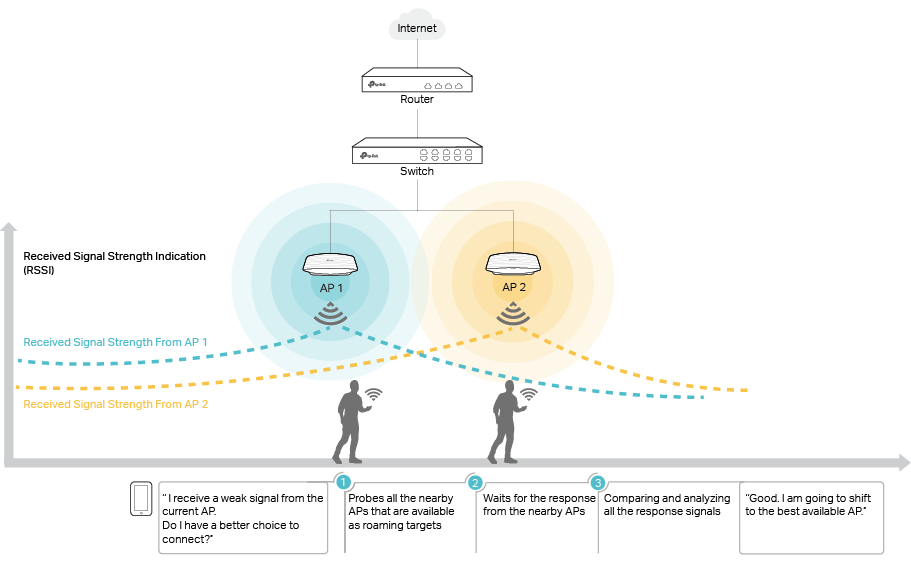 From the process of traditional roaming, we could conclude the reason why traditional roaming is slow. First, a wireless client will not shift to another available AP until its received signal gets weaker than the threshold. Before that, the client sticks to the current AP with a terrible Wi-Fi experience. Second, the mobile client spends much time on scanning all eligible channels for an overview of signal strengths distribution of the APs around.

To understand how Fast Roaming facilitates roaming, you need to be a little familiar with three industry standards: IEEE 802.11k, 802.11v and 802.11r. Each of them gives a solution to facilitate roaming, as shown in the following comparison chart.

The IEEE 802.11k standard allows an 802.11k capable client to request a Neighbor Report on the available APs. The AP responds with a list of nearby APs on the same WLAN with their Wi-Fi channel numbers. When the signal from the current AP weakens, the client can quickly choose a roaming target from the candidates on the list. 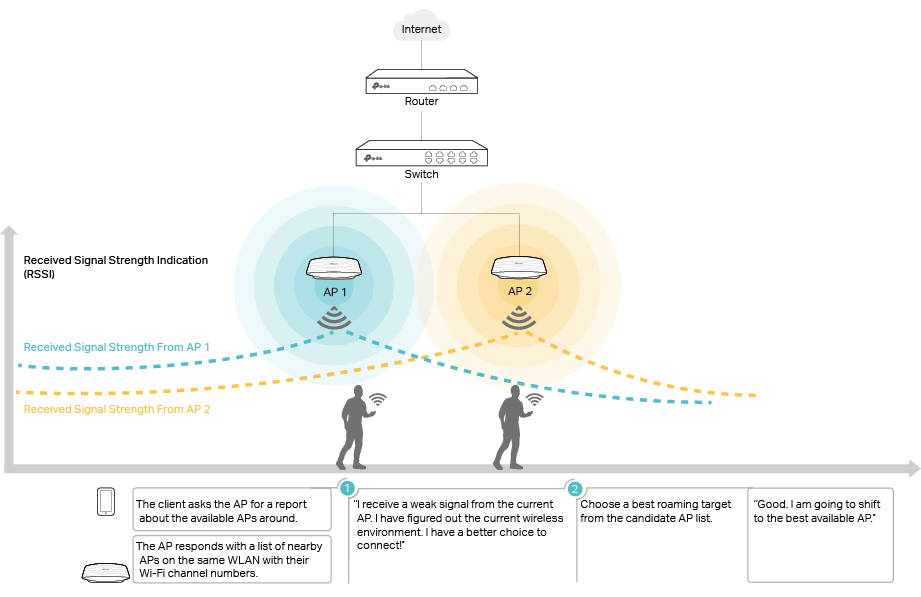 The AP evaluates the quality of the client’s connection, sends a message to the client to suggest it roam to another AP. The new AP will provide a better WLAN experience. In addition, roaming to the new AP helps to balance the load among APs. The client can decide whether it will follow the suggestion to roam or not by itself. 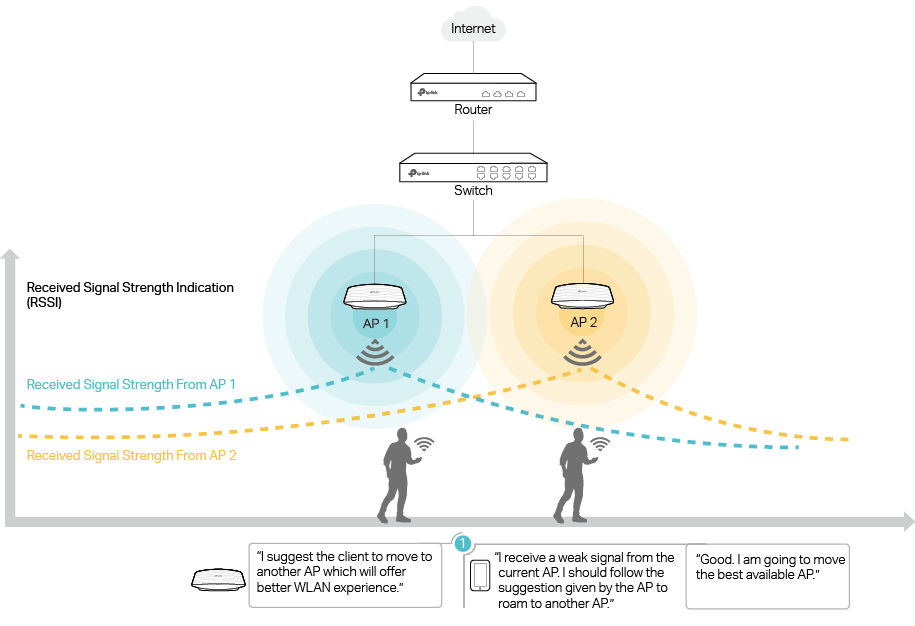 IEEE 802.11r Fast Transition (FT) Roaming is a new concept for roaming. 802.11r is suitable for WPA2-PSK and WPA2-Enterprise encryption methods which are commonly used in enterprise Wi-Fi networks. The initial handshake with the new AP occurs before the client roams to the target AP, and this kind of roaming is referred to as Fast Transition (FT). Thus the time for wireless authentications will be reduced.

TP-Link’s Omada EAP products combine 802.11k and 802.11v to help clients speed up both the search for the best target AP and movement to the AP. The Fast Roaming function of Omada EAPs relies on the Omada Controller. The process can be described like this: Omada EAPs collect and evaluate the Received Signal Strength Indication (RSSI) of the clients and nearby EAPs, and send all the information to the Omada Controller. The Omada Controller maintains a list of the available EAPs as roaming targets for each client. With this information, an 802.11k capable client can shorten the time to scan for the available APs. Also, it can decide the best time to initiate the roaming process when there is a possible connection with better quality than the present quality.

If the wireless clients run delay-sensitive applications, such as voice and video, Fast Roaming is quite important for a mobile Wi-Fi experience. To build a Wi-Fi network with Fast Roaming, you should take the following factors into account: