I've set up a TL-R470T+ with 2 WAN Connections.
The WAN1 connected ISP offers IPTV service using VLAN 100 between its main router/modem box and the TV topset box. Internet traffic is not tagged and phone traffic is not routed there (dedicated RJ11 port on the router/modem box)
I've put the main topset in bridge mode so I've got no router interference on the WAN1 port, I'm receiving the traffic as is.
The case has been mentioned previously here but found no answer with previous firmware releases of this load balance broadband routers. (see http://forum.tp-link.com/showthread.php?75344-Create-VLAN-on-TL-R470T )

I've put the topset behind a CPL connected port, where other equipments need regular internet traffic. The RJ45 cable on the TL-R470T+ which gets the CPL traffic is connected to port 5.

Basically I need to transmit the VLAN 100 TAGGED between port 1 and port 5.

Here are the options I've tried

1) No use of the IPTV mode
a) Create VLAN 100
b) assign it as TAG 5 on port 5.
c) Once you have tagged a VLAN for use on one of the LAN Ports, it seems you cannot TAG it for use on WAN ports

2) use of IPTV mode
a) use of 802.1Q tags is not checked but Checked Use IPTV and Custom mode
b) IPTV VLAN is marked as 100
c) You cannot leave phone or Internet as special VLAN 0 value (for example I thought it could mean UNTAGged), so putting not in use value
d) marking Port 5 As use for Internet,
e) The TPLINK router is created more ort less random VLANs (in fact VLAN for Internet port and a other random one)
f) none of my appliances behind the CPL works (Internet devices or the TV topset), but the TPLINK reports as PVID on this port and 100 (TAG)
g) changed the POrt5 on IPTV mode, doesn't work either

There seems to be a limitation in the GUI or the firmware for not being able to accomplish (1) directly.
(2) doesn't work either whereas it allows partly to send TAG on the WAN interfaces. 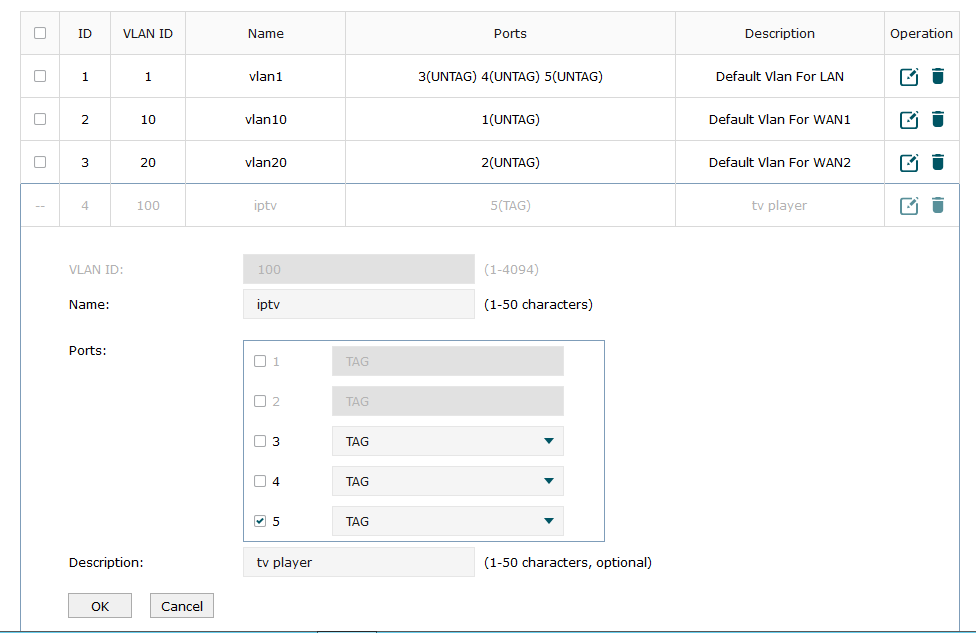 When editing the VLAN 100, you can not choose a WAN assigned port (grayed out)