Keeping track of clients and their use

Had my client call the other day and tell me everyone was having slow responses and several people said that they could not maintain their connection to an AP.

Advised client to call Comcast and have them check their service. Interesting results: While when monitoring the network in Omada cloud, I see maybe a maximum of 20 clients at any one time. Comcast insists that there are over 50 connections sucking up all the bandwidth. I have no idea where they saw 50 connections. I never have.

Marina owner tells me that speedtest comes back with an acceptable speed. She says probably bandwidth is used up by all the clients streaming at once.

Even had one client call and tell me that we are probably experiencing a "mesh storm." I had no idea what he was talking about. Neither does Google! He said that is where the various APs keep forwarding clients to each other until all the resources are gone.

I did check the log and notice that occasionally each AP disconnects and reconnects for no apparent reason.

I rebooted each AP (maybe I need to set an auto reboot daily) and enabled Airtime Fairness in the wireless settings.

Any thoughts? Recommendations? Perhaps limitations to impose on each AP or the controller?

Do you have band steering on?  Force dissociation?  Turn these both off.  Clients with weak signal may be bouncing band and forth between bands / AP's.  Also I'd change the 5.8GHz radios to 80MHz versus 20/40/80.  I've seen some weirdness with wireless MESH throughput with firmware 2.7 especially after a reboot.  Sometimes I need to go in and change the radio settings for the root node to 80MHz (from 20/40/80) or back.

Unfortunately the five 5.8GHz radios are going to be very busy chatting with each other in this MESH configuration.  You could try limiting clients to using only the 2.4GHz radios.  They get better range anyway, and with only 10Mbit/sec per client each AP should support 5-10 actively streaming clients per AP over 802.11n.

Remind me of your setup.  You're using CPE's to connect each AP back to a central location?  Did there end up being any wireless MESH or just point to point long range Wifi for each pier?

Did you implement per client bandwidth limitations of say 5 or 10 Mbit/sec?  Many clients do not support AirTime fairness, so I would turn that off.  Similarly band steering is often hit ot miss, so turn that off as well (if you're hosting on 2.4 & 5.8 GHz).

It would be hepful to have a PC/laptop or two you could remote into to run speed tests remotely.  Obviously the first step is to identify whether the issue is broadband related or Wifi related.

Is your braodband asynchronous (e.g. DOCSIS)?  Often heavy UL traffic can impact DL performance, too, even if the DL BW is not that heavily loaded.

But an onsite survey visit would be best, if possible.

My AP's (EAP225) can go for months without a reboot without issue.  I generally reboot them manually once a month or so just for good measure.

The total number of clients (whether it's 30, 50, or 200) -- in terms of the broadband backhaul -- doesn't really matter if the majority of them are idle.

Remind me of your broadband DL & UL speeds?  If, for example, it's ~200 Mbit/sec that's say 20-30 clients streaming HD video.  But the CPE's are only 300Mbit each.  Assuming that's the air link speed (i'm not very familiar with these products) the useable bandwidth is only about half of that.

So that's only 15 or so concurrently active streaming clients per pier / CPE connected AP.  Potentially fewer if there are multiple wireless MESHed APs uplinked to each CPE connected root node if there are lots of idle devices just chattering.

@JSchnee21 I am using 2 CPEs. One on the marina office and one on the B Dock. I'm using 5 EAP225s. We are running 2.5 and 5 GHz. One AP is connected to the dock CPE. It has the other 4 APs linked to it and I think that is the max number of direct links allowed. All 5 APs are part of the mesh. As for the type of broadband, I haven't a clue. It's Comcast if that helps.

I did limit the clients to 10 Mbps. Wasn't sure of the airtime fairness, so I can disable it again.

The one client who was complaining said he couldn't maintain a connection for over 10 seconds.

When I look at the APs most are at 25% utilization most of the time. Some do get higher and the graph says that the utilization is "high" but I have no idea how to change that.

When some are high, I look at the AP on B dock which is the AP that talks directly to the CPE. Doesn't seem to indicate any abnormal utilization.

What threw me was Comcast telling the marina admin that there were over 50 connections when I never show over 25 (plus one connection in the marina office). Now the marina office does have another router hooked up for wireless access within the office. I told the manager that there may be a bunch of connections to that wireless router but she said she doubted it. I told her to unplug it to see what happens.

I can do down the the marina and check the speed, but have stayed away for the last few weeks because I was trying to abide by the quarantine rules. I'm not in much "danger" out on the docks, though. Heck, I rarely see anyone there.

I'm not sure how doing a speedtest remotely would work accurately, as I would be influencing the speed by being logged on.

Do you have band steering on?  Force dissociation?  Turn these both off.  Clients with weak signal may be bouncing band and forth between bands / AP's.  Also I'd change the 5.8GHz radios to 80MHz versus 20/40/80.  I've seen some weirdness with wireless MESH throughput with firmware 2.7 especially after a reboot.  Sometimes I need to go in and change the radio settings for the root node to 80MHz (from 20/40/80) or back.

Unfortunately the five 5.8GHz radios are going to be very busy chatting with each other in this MESH configuration.  You could try limiting clients to using only the 2.4GHz radios.  They get better range anyway, and with only 10Mbit/sec per client each AP should support 5-10 actively streaming clients per AP over 802.11n.

This is all connections, wired, wireless, equipment (AP's, CPEs, OC200. any smart switches, etc,  For example, I have ~45 wireless clients on my home network at any given time.  But I probably have 75-80 total network connected devices when I include all of my hardwired and network equipment.

Most remote connectvity solutions (Remote Desktop, UltraVNC, etc.) are very light weight so they don't really impact bandwidth tests assuming your broadband is >50-100 Mbit/sec.  You should definately get the specs of the broadband the marine is paying Comcast for.  And routinely run speed tests from at least wired clients to ensure you are getting what you are playing for.

But the bigger issue will be connecting in remotely, unless their router is setup for VPN.

"I can do down the the marina and check the speed, but have stayed away for the last few weeks because I was trying to abide by the quarantine rules. I'm not in much "danger" out on the docks, though. Heck, I rarely see anyone there."

Yeah, I'm not sure what state you are in, but I live in NJ and people here are out and about all the time.  Just wear a mask, and try to stay away from others.  Most marinas I've been too (in SD for example) often seem very quiet.  Just a large parking lot for boats (-:

@JSchnee21 OK, I'll check those settings. I was unsure of changing the 5 GHz but perhaps your suggestion of just turning off 5GHz is best.

I'll let the marina manager know what I'm doing and then she can handle the flack!

@JSchnee21 I went into each AP and turned off the 5GHz. When I look at the status, there are still people logged on 5GHZ. I take it they will be kicked off next time the APs poll each other.

Maybe I wasn't clear.  You don't want to turn off the 5.8GHz radios, they are needed for the MESH.  What I was suggesting is reconfiguring the SSID that that customers are using to only be broadcast by the 2.4GHz radios.  This can be done remotely through the OC-200 or Omada and does not require a site visit.  This would free up the 5.8GHz radios on each of your 5 AP's (one rootnode, four client nodes) for back haul only.  The wireless MESH backhaul uses a hidden SSID on the 5.8GHz radio only.  So one of the limitations of the TP-LINK EAP225 Wireless MESH solution is that client 5.8GHz traffic (if there is any) shares the same bandwidth as the backhaul.

Depending on which model CPEs you have, they are either 2.4GHz (CPE210) only or 5.8GHz (CPE510) only.  You cannot change this, nor do you want to.  This has no bearing on the how the EAP225 radios are configured.

Here you can see, under the SSID configuration on my OC-200 controller, one of my SSID's is only associated with the 2.4GHz radio (I have a separate one for the 5 GHz radio).  In your case, if you make this change in Omada, the configuration will propagate throughout your Wireless network forcing end users to connect only to the 2.4GHz radios.

The CPE's should have separate SSID's and passwords which are not shared publicly and must be configured locally (I think) on the management websites of the CPE devices.  I don't think Omada can managed the CPE's -- but I could be wrong.  Assuming these were setup with originally with their own dedicated SSID's and passwords, no changes should need to be made to their configurations.  But when you are onsite you should check their link quality in case something caused one of them to shift around (e.g.) wind which could hinder the point to point uplink performance between the root node and your wired network. 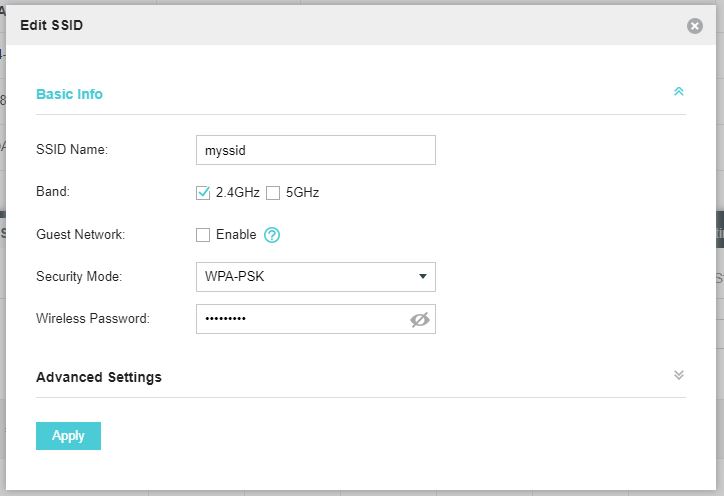 As indicated before, all of your 5GHz radios will use the same channel due to the wireless MESH.  You can only make changes to this channel and the channel BW on the root node of the MESH (the one the other 4 connect to).  You should do this through the confgi page for that one AP in Omada.  Set it for 80MHz and try both channels 36 or 149 and see which one works better.

What channels are your 2.4 GHz radios set on?  You'll need to alternate them -- like this -- assuming your root node is in the middle (Channel 6).  And assuming these three channels are "clear."  If not, you may need to substiute in channels 3 & 9 -- which is not ideal as these overlap some with 1,6, and 11.  Make sure 2.4GHz BW is set to 20MHz.  You may need to adjust the transmit power down a bit (e.g. from High to Medium) depending on how close the AP's are to each other.  The 5.8GHz power will likely need ot be set to High.

Getting the Wifi signals to penetrate the ships going to be the hardest part, I would imagine.  If they have metal hulls and decks it's not going to work well unless they have external antennas.  Fiberglass should be okay.  And on deck  / above deck should also be fine.  While 2.4GHz is slower and has less aggregate BW, it carrier and penetrates better.  The more difficult part will be getting the end users signal from their mobile device back to your AP's.