Just a suggestion. Quit making any 10/100 switches. In this day and age, all switches should be standardized at gig speeds.

All ports on all devices nowadays should be 1gb and up!

Just a suggestion. Quit making any 10/100 switches. In this day and age, all switches should be standardized at gig speeds.

Nonsense! There are more application scenarios where 10/100 Mbps is a requirement than you can think of.

For example, take a hotel with 60x EAP225-Wall in 60 rooms and a 700 Mbps Internet uplink. You do not want to give each guest/room more than 10 Mbps bandwidth each, but you need longer cable lengths up to 250m. This would be a typical scenario to deploy the new TL-SL1218MP switch which offers 250m cable length on its extended ports.

@R1D2 Just curious and would love to have a discussion. Personally, I do all my netowrk planning with the 100m distance in mind. Would have IDF's in place with fiber runs back to the MDF if distance were an issue. I would seperate all traffic with VLAN, set switch speed if needed and limit bandwidth through the controller software.  Maybe, just maybe, a little shack on the edge of a parking lot, but that would be a rather long lot at 250m.

well, you and I can do that using a managed switch.

But there are customers who don't want a managed switch and don't know how to use it. Their core business is a different one and they simply want a cheap, dumb switch which they can install, turn on and use. And 250m is not always a straight line, it's the cable length in cable ducts going from the main building around three corners and five floors straight into an outhouse where the switch is.

What's more, in commercial production lines there are still systems in use that support just 100BASE-T over CAT.5 cables or 10BASE-T over CAT.3 cables b/c it provides enough bandwidth to keep those systems running. Why should they use 1 Gbps switches and throttle them down when they can use 10/100 Mbps switches?

Waht's the reason why you do want a vendor to quit producing or selling 10/100 Mbps switches? Your personal preference?

I think as long as those switches are sold, they will be produced. You can see this with the mentioned TL-SL1218MP and TL-SL1226P, which are new products. Obviously there are customers demanding those switches, else they would not be produced. The market regulates this, not me, not you.

If it would be an argument what you or I or the majority of users have, I might say that since cable infrastructure in houses build in last 15 years here in my country is CAT.7 and I use 10 Gbps over those cables, 10GBASE-T is »today's standard« (16 years old already) and I suggest vendors to quit making 1 Gbps switches, since 1000BASE-T is rather old now (21 years). What would you say to such a point of view?

And believe it or not: I still have an UNIX system supporting only 10BASE-2 over coax cable and sometimes I like to copy old software sources from this system to my file server – it still boots and runs since in those times when it was built there was no such thing as planned obsolescense. I even have a hub (if you are old enough to know what this is) to connect the 10BASE-2 system to my today's network: 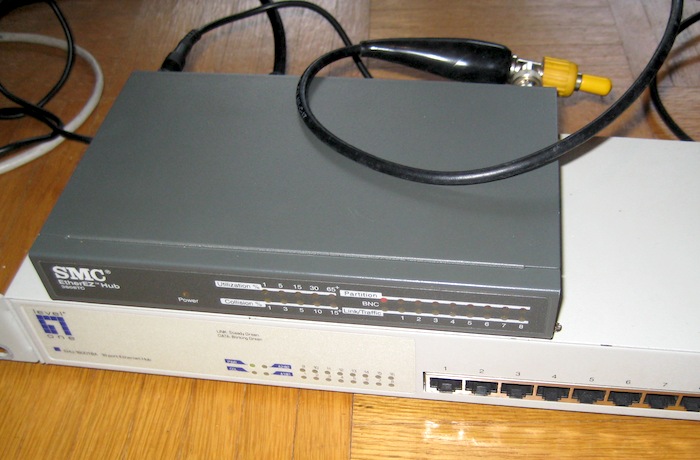 @R1D2 Point taken. Yes, I am old enough to know about hubs and I still have come BNC connectors in my toolbox. Maybe I'm just being old and lazy about verifying specs on a switch before I buy and am just assuming gig speeds. I think I assume that when I put in a switch for a client, I am the one managing it. Thanks for helping me get out of my own head and seeing from a different perspective.

Maybe I'm just being old and lazy about verifying specs on a switch before I buy and am just assuming gig speeds.

Why had I only suspected that ...

Okay, the new TL-SL differs from this scheme (L might stand for long cable runs? No idea.), but that's an exceptional switch.