Everything is setup and configured...no vlan restrictions yet as I wanted to be able to trunk across until I can lock them down and test things.  Here's the issue...I have a Linux docker server that is connected to one of my LAN ports (wired) on the ER605.  I can see it no problem and the IP that I set static on it.  I also have various docker containers running on a macvlan docker network with static IP addresses for each docker.

Omada can see 3 docker containers and I've been able to assign those a static address using the Omada controller interface.  However, Omada can't see the other 10 docker containers that have static IP addresses.  This seems to be problematic to me...because if they don't have a DHCP lease assigned, I'm worried that Omada will double assign the IP to a different device and take my dockers offline.  As some of my dockers provide DNS, proxies, and VPN services...you can imagine that this is NOT a good thing.

Has anyone else seen an issue like this where docker containers with static IP's are NOT detected by Omada or the router?

It's been a few weeks and I figured that I'd give an update.

Nothing has changed.  The Docker containers still cannot be seen by Omada even though they have static IP addresses in the LAN vlan.  I've come to find out though that the issue is NOT Omada...it is Unraid that is causing the issues.

Unraid's implementation of Docker does not allow for it to register with external DHCP services.  I'll keep this thread up to date if/when they post a solution.

Omada should not dup assign the IPs. You can paste more pics about your issue. Like not showing up in the Client and a fixed IP enabled.

Upgrade everything to the latest firmware and if this happens after the upgrade, that needs some tests.Not sure if this is a known bug or not.

All of these docker containers would be considered servers...so they have all their IP's setup as static addresses...regardless of what Omada thinks.  Setting them to DHCP so that they can get a lease that isn't their permanent IP address would be a step backward in time...I find it super odd that Omada cannot detect these at all...I can do a quick nmap scan and see them with no issues.

The omada equipment is all already static for IP's...I made sure to set those right away.  It's the docker server connected to the router referenced in the OP that isn't being detected.

Just to prove that you can route to them: 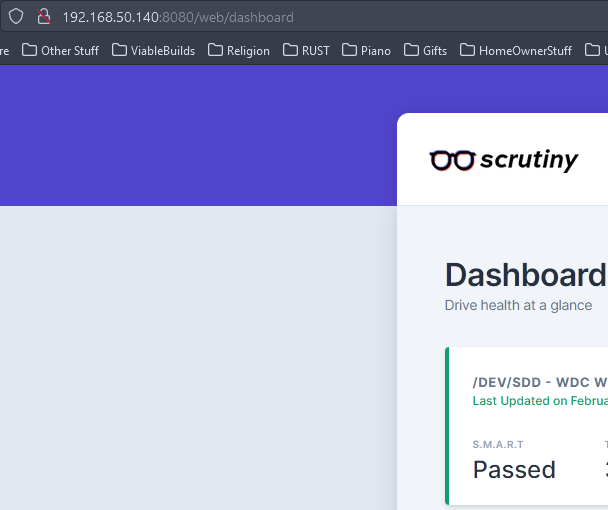 But when I go and look for those three, only one of them is listed in the client list:

I was able to set 'TheLounge' as a fixed IP here:

As stated, I can't reserve an IP unless Omada is aware of it...and Omada only detects 3 out of 13 along with the host server.

I did some tests.

So, if you use Fixed IP, DHCP reservation will be created and turned on auto.

In conclusion, I don't have the issue with ER605 latest firmware and software Controller 5.0.30

Would be redundant to use the last way, 3 yes.iPhone just went to buggy and does not show the WiFi bar. Yet, I can ping the gateway.

I appreciate the testing but I'm not having an issue with wireless and dhcp...wired clients aren't being found.  I'd love to be able to just turn on a fixed DCHP reservation for them when they detect...but until they detect, I cannot.

I just don't know why it's happening but I suspect it is because I'm not using a connection off my switch...I'm using a LAN port off my router.  I have no evidence...just a gut feeling...I'd expect any static IP's to be found inside a DHCP table on any router...regardless and in this case, they are not.

oh. i did not test the wired. I did the test on wireless.

What is the controller version?

First picture is the overall architecture...I'd like to call notice to the clients connected (Client Group) to the router: 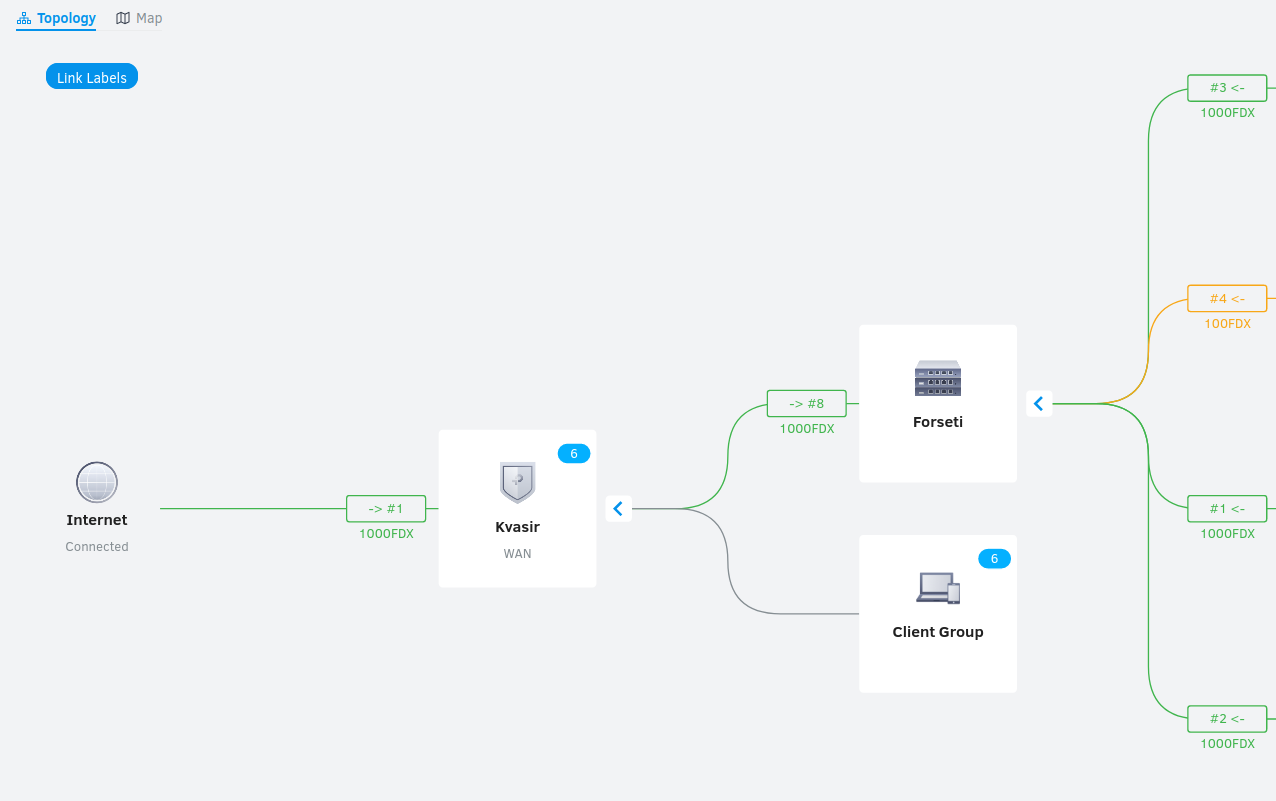 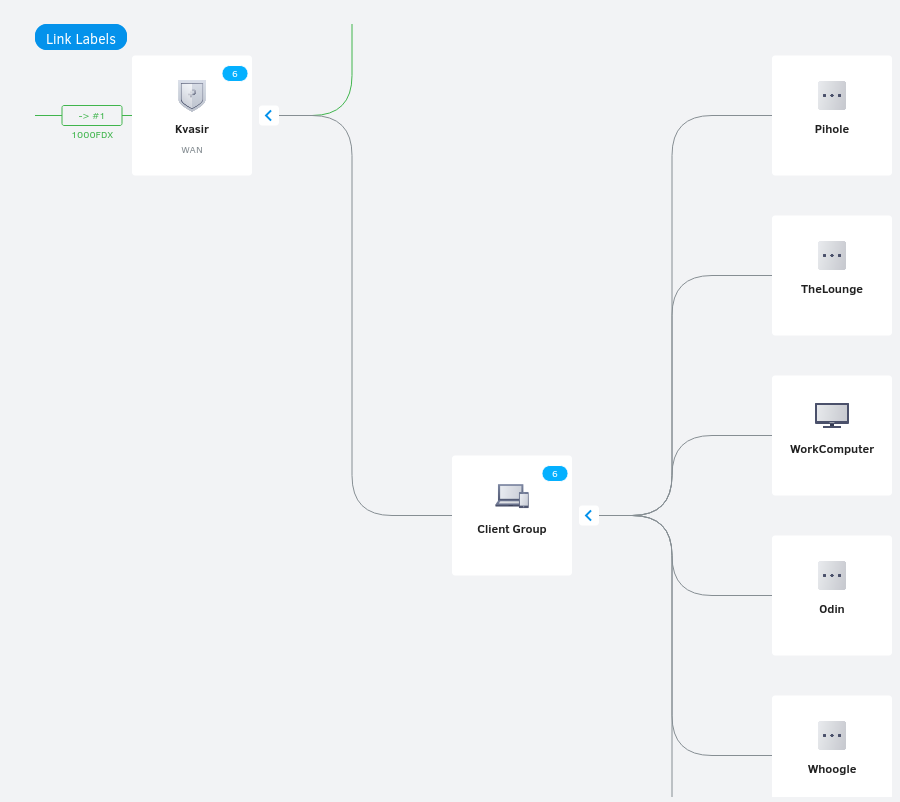 And here are the ports of the router in use:

Port 3 connects to the Docker server.  Port 4 connects to a dumb switch where my work computer and gaming computer are (wired) and port 4 goes to the 8 port switch.  I'm thinking that the LAN port #4 can't communicate with the Docker port #3...or doesn't communicate fully...and I host pihole which is my DNS on the docker system.  Just not sure what to do to fix it.  Maybe put another switch in between?  Open to suggestion.

So, the question becomes...Do I need to set separate wired networks for each port on my Gateway?  Currently, I just have the following:

Do I need to differentiate a new network...say LAN2...for the switch ports and give them different IP's in order to fix my issue with the docker server?

@devn3t I guess the problem could be on the dockers' gateway settings. If the dockers only communicate with each other via LAN and all of them are behind your docker server, then their data will not be sent to the Gateway, so the gateway can't detect them.  You may check the static IP settings on the 10 docker containers.

About the VLAN settings, you will need an omada switch and I don't think it is related to your original issue. But yes an whole omada network might be helpful.

This was a good idea...I had to actually go and check to see what the gateway settings were.  However, the setting was correct.  I also have an enitre omada network.  I actually have  2 x 8 port Omada switches trunking off my LAN port on my gateway.

Interestingly enough, 5 of 11 docker containers have no problems registering with Omada and I've been able to assign static addresses in the interface with them

I still don't have an answer for if we're supposed to use the gateway WAN/LAN ports as LAN when we can't setup individual port configurations on the gateway...if I have to get a managed switch to sit in between my servers and the gateway it can be done...but I'm so new to networking like this.

It's been a few weeks and I figured that I'd give an update.

Nothing has changed.  The Docker containers still cannot be seen by Omada even though they have static IP addresses in the LAN vlan.  I've come to find out though that the issue is NOT Omada...it is Unraid that is causing the issues.

Unraid's implementation of Docker does not allow for it to register with external DHCP services.  I'll keep this thread up to date if/when they post a solution.