How do I connect 3 buildings using CPE510 hardware

I have 3 building locations on my property - currently I have an Internet connection and wireless network in Location 1 - I want to extend the network and internet access to the other 2 locations.

Any advice or input on this will be appreciated.

Should be no problem with 4 devices and two different WiFi channels. On Location 2 you can even power the two relaying CPE510s with the same power supply and feed the PoE through the second port of a CPE510, so you need only one cable to the outdoor CPE.

What mode would I configure the hardware for the link from Location 1 to 2 and location 2 to 3 ? All in Bridge or some other configuration ?

Can I install a wireless router configured as an access point at location 2 and bring the Ethernet cables from both of the CPE510s at that location into the LAN ports to transfer the signal between the two 510s as well as provide wireless access to the network inside Building 2 location ?

What mode would I configure the hardware for the link from Location 1 to 2 and location 2 to 3 ? All in Bridge or some other configuration ?

I would not use bridging mode except you really need only one broadcast domain over all locations. Usually in a setup with several interconnected networks the CPEs are set to AP mode (CPE #1/3) and client mode or AP client router mode (CPE #2/4). The user guide explains the possible operation modes for different use cases very well, you should take a look at chapter 2 / page 4 to 9. It is very helpful to find the best operation mode of the CPEs.

Can I install a wireless router configured as an access point at location 2 and bring the Ethernet cables from both of the CPE510s at that location into the LAN ports to transfer the signal between the two 510s as well as provide wireless access to the network inside Building 2 location ?

RTouris
LV3
2016-12-23 18:50:47
Posts: 173
Helpful: 7
Solutions: 0
Stories: 0
Registered: 2018-09-03
Re:How do I connect 3 buildings using CPE510 hardware
2016-12-23 18:50:47
Also in the process of 'venturing' on a similar wireless project, currently in the final stages of receiving some missing parts, so I'd expect this to materialise over the course of the next two weeks. Already have a solid link between two of the three sites that need be connected, so keep following for a detailed report as it all slowly yet surely finalizes.

R1D2 do you mean Channel Width in wireless settings ?

Ok I have sorted this setting also, on your youtube demo of cpr510 you recommend scanning the frequency for quality, in the graphic are 3 lines yellow, red and blue, red an yellow are pretty much the same in all channels but blue is spiking up in some , is this meaning that the channel has interference on it ?

Yes. Could be caused by another AP or a weather radar operating in the 5 GHz band (depending on where you live) or anything else. Blue means "peak", red is "current" and yellow (actually sand-brown) means "average" level of signals/noise. But it's not my YT video, I'm just a user of TP-Link gear.

And just for a future development of my network, is possible for an AP cpe510 to serve two ore more clients cpe510 if all of them are in range ?

Sure. This is called Point-to-Multipoint (PtMP) mode. The CPE510 also offers MAXtream, a time-multiplex technique to ensure that every CPE client get's an equal amount of AirTime, thus minimizing interferences of the CPEs on the same channel (you can't use different channels if all clients are connecting to the same AP).

But you should pay attention to the antenna's beam width of the CPE, which is 45° on the H plane and 30° on the E plane. Therefore, if you want to distribute a WiFi signal in a wider range, you should consider use of the WBS510 with a sector antenna such as the TL-ANT5819MS, which offers 120° antenna beam width. See picture below for a typical PtMP setup using 3 CPEs and a WBS with sector antenna. The WBS510 runs under the same operating system as the CPE510 does. 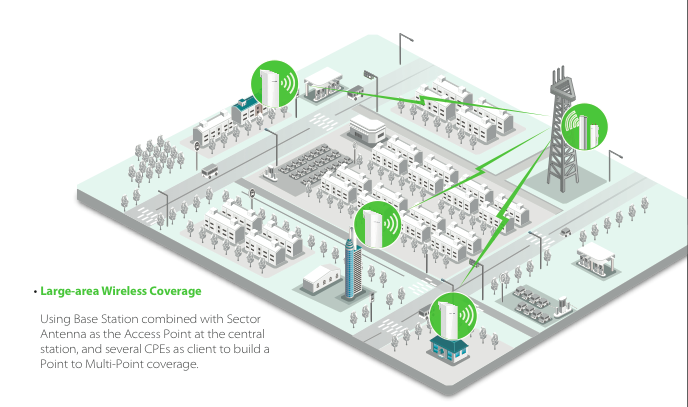 Related Articles
How to Question. Create a bridge between buildings using a EAP 110 and a CPE 210?
2139 0
Multi-point bridging advice (CPE510): How many units?
507 0
Cannot connect to CPE510 from iPhone 7 using password
1841 0
How to connect using with CPE210 between two points has a mountain
223 0
How many CPEs can connect to CPE510 in WISP mode and in standalone mode no Pharos?
300 0
Creating a Caravan network using two CPE510
444 0
Report Inappropriate Content
Transfer Module
New message