This morning I attempted to update to the latest version of P9 firmware (V1_200513). I installed the update via the Deco Android application. The Android app indicated that the firmware update downloaded, installed, and rebooted successfully.

Post update, the main deco unit LED remains solid yellow. The SSID is broadcast however there is no network connectivity once connected.

After about 5 minutes, I power cycled the main deco unit and waited for a while; however the result was the same - solid yellow LED. The LEDs on the other units remain solid red.

Back in the Android application, I attempted to set the main deco to one of my other units. However, the LED on the other unit remains red, even after plugging in the my modems Ethernet cable.

Any other ideas or suggestions? There were no power interruptions during the firmware update itself. Are my units bricked?

Holding down one of the reset buttons on one of the P9 access points with solid red LED, successfully reset it and put it into setup mode with flashing blue LED.

I began to setup my network again and was able to get everything configured and access them new main Deco unit from the app. I can see that the update was applied to this AP. The features added by this update are fantastic!! However, the LED is now solid red and I can't get the unit to detect internet access even though it's connected to my modem. 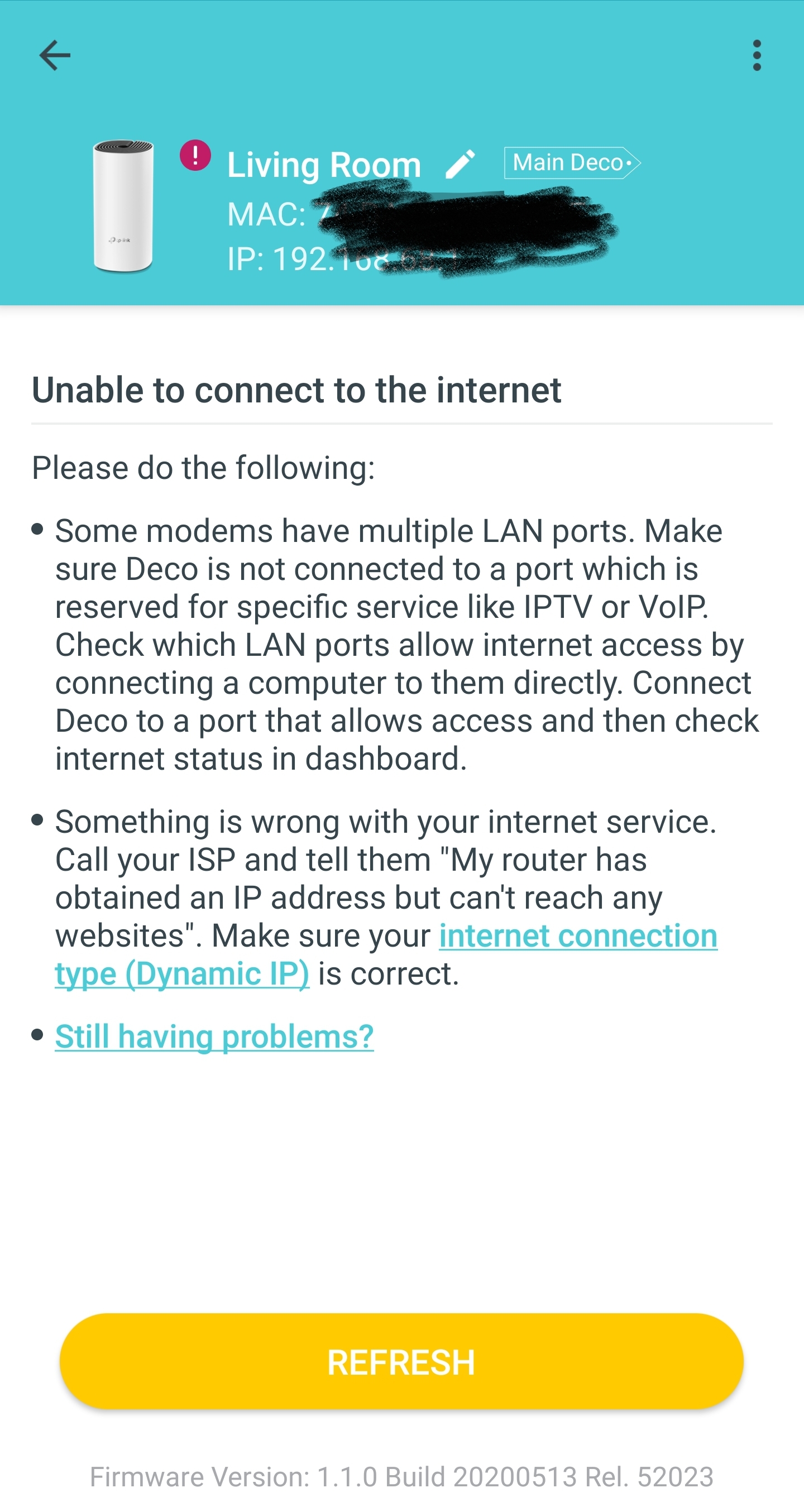 After power cycling my modem the main Deco now has internet connectivity. Will now attempt to get the other 2 APs setup.

I was able to connect 2/3 of the APs to the mesh network. The unit which was previously the main Deco is stuck on a solid yellow LED. No amount of pressing or holding the physical reset button on the unit seems to get it back into setup mode.

I just got today my 3 units pack P9 deco and I was extermely happy.

I installed the three of the set and it worked fine for few minutes.

The android application deco, asked me to update the hole system, which I accepted. The update was fine according to the application

No, I have the same exact situation as you @Paul892. The main unit is having the solid yellow LED. The two orher units have the red light. I'll contact the support tomorrow to fing an issue. I'll keep you informed if any updates from my side.

I'm also having the same issue. I just upgraded the firmware, and afterwards, the main Deco stayed solid yellow whilst the other two blink red. I tried switching around each router to no avail. Really bummed out..

I was able to hit the reset button on the bottom of the units blinking red and completely rebuild my mesh network using two units. I plan on RMA'ing the third unit soon.

I think I'll give that a shot.

Edit: Your idea worked, thank goodness. I'll be RMA'ing my third one as well.

Guess the lesson here is to literally never update. Goodness..