I just received my Archer C80 an hour ago and I am very disappointed as it doesn't have Bandwidth control. I've been using the TL-WR841HP v2 for the past 5 years or so, and apparently it has been acting up lately, the reason why I bought this new Archer C80. Unfortunately, I never thought that Archer C80 was not equipped with Bandwidth Control because it was a "new" router, which is why I didn't feel the need to make further research.

Apparently, I am living in a "third-world country" in which internet is very expensive, means I do not have a fast internet connection. Bandwidth control is very essential for me because it fixes bufferbloat when other devices are streaming, downloading or browsing. Now, I am already experiencing large ping spikes when gaming.

Hopefully, in the next firmware update the Archer C80 will be equipping Bandwidth control.

It is a prioritization of devices 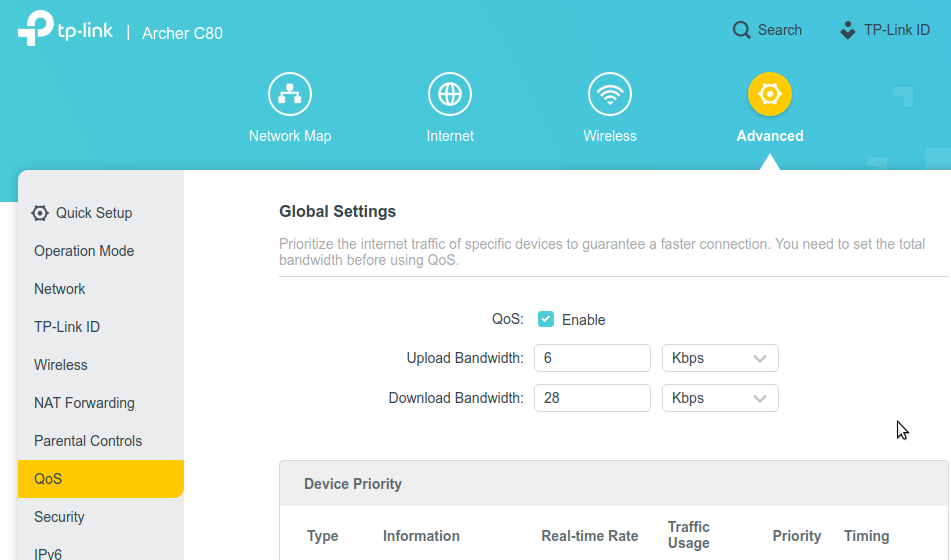 @SamuelV If you try to do speedtest while QoS is enabled, the speed won't be limited. I think QoS and Bandwidth Control are different, I don't really see the effectiveness of QoS in terms of fixing bufferbloat.

@JustR i better understand, thanks. In tplink's products, QoS will limit the amount of bandwidth allocated to devices when the amount you entered is reached. And will give a priority to the devices you've designed to be prioritized.

For the moment none of their products does any traffic shaping helping to fight bufferbloat. Even the gaming routers and even if visually we could think it's the case.

I don't know if c80 is supported by openwrt but if it was the case, the sqm package would be the way to reach what you need.

@SamuelV I guess the only thing that I could do right now is to wait for the firmware update. But I read somewhere that they cant confirm any ETA as of the moment. But, I do hope that they could provide this simple option to the released and upcoming routers.

I just checked my router, no new firmware update showing, my router is US version though. We also do not own mesh since we don't have a huge house. I am looking forward more to Bandwidth control because we do not have a large internet plan either. :/