Wi-Fi 6 is in full swing this year. Many companies have already launched their Wi-Fi 6 related products and released quite a few documents introducing it. So what is this new-fangled phenomenon? And how will it impact daily life?

Wi-Fi 6 (originally 802.11ax) is the latest version of the 802.11 standards for wireless network transmissions that people commonly call Wi-Fi. Thanks to WFA (the Wi-Fi Alliance), they simplified the mouthful that is 802.11ax and streamlined the naming convention for Wi-Fi.

The previous generations of 802.11 standards will receive equal treatment, too. For instance, the existing standard 802.11ac, the fifth generation, is called Wi-Fi 5 now.

The first topic that pops into your head after hearing about Wi-Fi 6 is probably its speed. Due to improved technology—OFDMA, 1024-QAM, 8x8 MU-MIMO, and BSS coloring—Wi-Fi 6 speeds are roughly 30% faster than Wi-Fi 5. The theoretical maximum transfer speeds are up to around 10 Gbps (for techies: 8 spatial streams at HT160 bandwidth in 5GHz).

Theoretically 30% faster? Is that it?!

Summing up the full potential of Wi-Fi 6 is a bit more complicated than just saying it will make your Wi-Fi network faster.

Speed and range are important factors—but beyond these basics, what really matters is how Wi-Fi 6 will reshape the way our network devices. Routers and access points (APs) will now handle the increasing number of internet-connected devices in our homes and lives.

All of this without mentioning the cutting-edge technology that improves network stability and security; reduces latency when more devices connect to the internet,and extends devices’ battery life.

More QAM (the friendly acronym for quadrature amplitude modulation) allows more binary code to send with each transmission. For example, a 2-QAM router could only transmit 1 bit of data at a time while a 4-QAM router could send 2 bits. That’s double the code sent at the same time.

Wi-Fi 5 (tech-speak: 11ac) routers use 256-QAM which lets them send 8 bits of data at once. At present, Wi-Fi 6 comes along with 1024-QAM, which enables devices to send 10 bits with each transmission. The Wi-Fi Alliance claims that this will equate to speed boosts of 25% over Wi-Fi 5.

OFDMA and MU-MIMO—make your router a better multi-tasker

If you browse the internet, you’ll hear everybody explain OFDMA with analogies to four-armed bartenders and machine gun-mounted merry-go-rounds. Let’s simplify all this with garden sprinklers.

Let’s say you have an old-school rotor sprinkler (you know, the one that shoots one stream of water and rotates around). It gets the job done and after a while, everything in range of the sprinkler gets watered. Nice.

However, previous generations of Wi-Fi took it a step further. Rather than have each patch of grass (your devices) wait for a whole rotation before being watered, the sprinkler was automated to shoot its water whenever a patch of grass becomes too dry. Pretty nifty and cool.

Except, what happens when more than one patch dries up at the same time?

Before OFDMA, each device would have to wait for one after the other for data. This happens so fast, you might not notice it. But with data-starved applications like streaming Netflix or online gaming competing with each other, you might see buffering and/or lag (latency refers to this wait time).

OFDMA is adding more streams to your water sprinkler system by getting a spray head. With a spray head, instead of waiting for one-at-a-time now multiple streams shoot out, watering multiple patches simultaneously.

On a technical level, OFDMA gives your router the ability to serve multiple devices at once within a single channel. It allows your router to divide channels it is using right now into smaller frequency allocations called resource units, or RUs. You can imagine each RU as a sprinkler nozzle in our previous analogy.

For a real-world example, let’s say you’re browsing Twitter on the couch while your sister re-binges The Office on Netflix. Your Wi-Fi 6 router may allocate one RU to your phone and another to the TV, or divide the data each device requires between multiple RUs. Either way, you'll both get service from the router simultaneously.

(Want to know more about OFDMA? Please refer to https://community.tp-link.com/en/home/stories/detail/139)

Unlike SU-MIMO in earlier 802.11 standards, MU-MIMO introduced in Wi-Fi 5 uses spatial diversity between devices to transmit independent data streams on the same bandwidth, which greatly improves the throughput and the entire network.

UL MU-MIMO is a brand new feature in Wi-Fi 6. Wi-Fi 5 and earlier 802.11 standards use UL SU-MIMO, which means the router can receive data from only one user at a time. The Wi-Fi 6 version of MU-MIMO will fix that, and increase to eight users on the uplink.

MU-MIMO was first introduced as an upgrade for Wi-Fi 5, but only 4x4 MU-MIMO (downloads only) is supported. In 2019, The Wi-Fi 6 version of MU-MIMO is 8x8 MU-MIMO which means your router antenna can transmit data to 8 devices simultaneously. 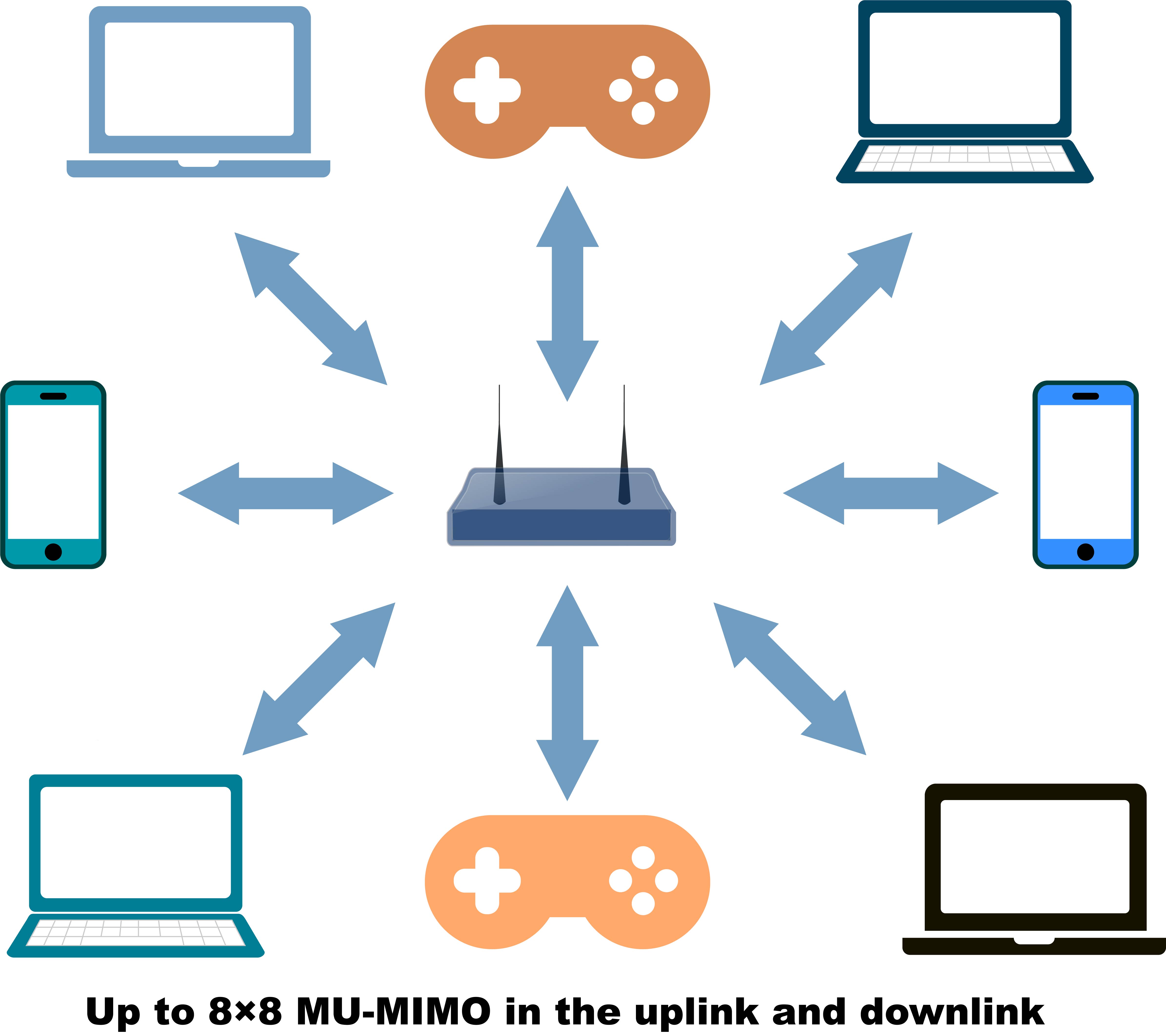 Wi-Fi 6 uses a longer OFDM symbol to transmit data. What’s an OFDM symbol? It’s more technical name might give you an idea: orthogonal frequency-division multiplexing. Since the peaks become orthogonal to each other, there’s less overlap and interference happening.

Analogy: let’s say you’re feeling dangerous and decide to go crowd-surfing. You’d hope that everyone raising you up can easily pass you around. Their hands, in this case, refer to the signal peaks in OFDM. The less they bump into each other, the smoother the experience.

Without OFDM, if signals cross long distances, there is more interference on the frequency band. What’s worse, obstructions greatly interfere with incoming signals. A long OFDM symbol will ensure the arrival of clean data packets and reduce retransmission times, which increases coverage distance.

802.11ax introduces a new mechanism called BSS (Basic Service Set) coloring. Imagine that you’re searching for scanned images on your laptop. But the relevant files are all just titled “SCAN01,” “SCAN02,” etc. You’d have to open and view them one by one to find the right one. That’s pretty inefficient and would waste time. Don’t you think?

So, what you do is rename each file with good titles and after scanning each. Next time you won’t feel troubled to get the information you want. Similarly, in Wi-Fi 6, BSS coloring is another method to differentiate between BSSs (that is, access points and their devices) on the same channel.

For each channel (imagine them as radio station channels like 99.1), devices take turns interacting with the AP to avoid interference and collisions. Channels (remember, radio waves) are limited in number, so many APs have to be assigned to the same channel in high-density scenarios like a stadium, shopping mall, and neighborhoods.

The AP will receive many useless data packets from neighboring networks and thus the right data packets are delayed. The BSS color field “colors” the data from different BSSs by assigning a specific color to each channel. The receiver can identify different signals and stop receiving them earlier, thereby avoiding waste of the transceiver’s time.

If the colors are the same, we can tell that the interference signals come from the same BSS and signal transmission should be delayed. With different colors though, the interfering signals won't grind to a halt. The two Wi-Fi devices can transmit data on the same channel and at the same frequency.

Target Wake Time—extends the battery life of your devices

Thanks to the new feature called Target Wake Time, Wi-Fi 6 routers will act like traffic cops and schedule devices to stop and go. This helps devices avoid colliding with another incoming signal and creating congestion, which, in turn, enables them to spend more time in their battery-saving sleep mode. TWT can extend battery life in devices like smart plugs and motion sensors.

What difference will Wi-Fi 6 make in the near future?

Wi-Fi 6 will drive Wi-Fi toward the future as the growth of wireless continues.