As a Wi-Fi user, you’ve surely encountered the term “WPA2”. WPA2 has been the most widespread technology for protecting Wi-Fi networks for more than a decade. If you would like to know more about it, you can check out our article, Tips on Choosing Security Mode for Your Wi-Fi, which introduces the evolution of 802.11 security in Chapter 2. But while WPA2 has been the prevailing choice for Wi-Fi security, times are changing. In 2018, the Wi-Fi Alliance announced the next generation of Wi-Fi security, WPA3.

WPA3 (Wi-Fi Protected Access 3) is a security certification program introduced by the Wi-Fi Alliance. It is built on the foundation of WPA2 and divided into two versions: WPA3-Personal (for home) and WPA3-Enterprise (for business). The Wi-Fi Alliance provides optimization plans for both versions of WPA3.

Why WPA3 Is Safer than WPA2?

You may have realized some of the flaws of WPA2 if you’ve read our article Tips on Choosing Security Mode for Your Wi-Fi. WPA3 was developed with the mission to fix the flaws found in WPA2. There are many details of how WPA3 enhances Wi-Fi security, and as mentioned above, the SAE and 192-bit security features are two major improvements.

SAE is a password-based authentication method defined in IEEE 802.11-2016. It is the core of WPA3. In WPA3-Personal, the Wi-Fi Alliance replaces Pre-Shared Key (PSK) authentication with SAE which brings the following benefits:

The tool cracks the password by trying all the strings in a pre-arranged list (also called a dictionary) without exchanging any messages with the AP. You can generally avoid these attacks by using long, complex passwords, as they are less likely to appear in the dictionary. 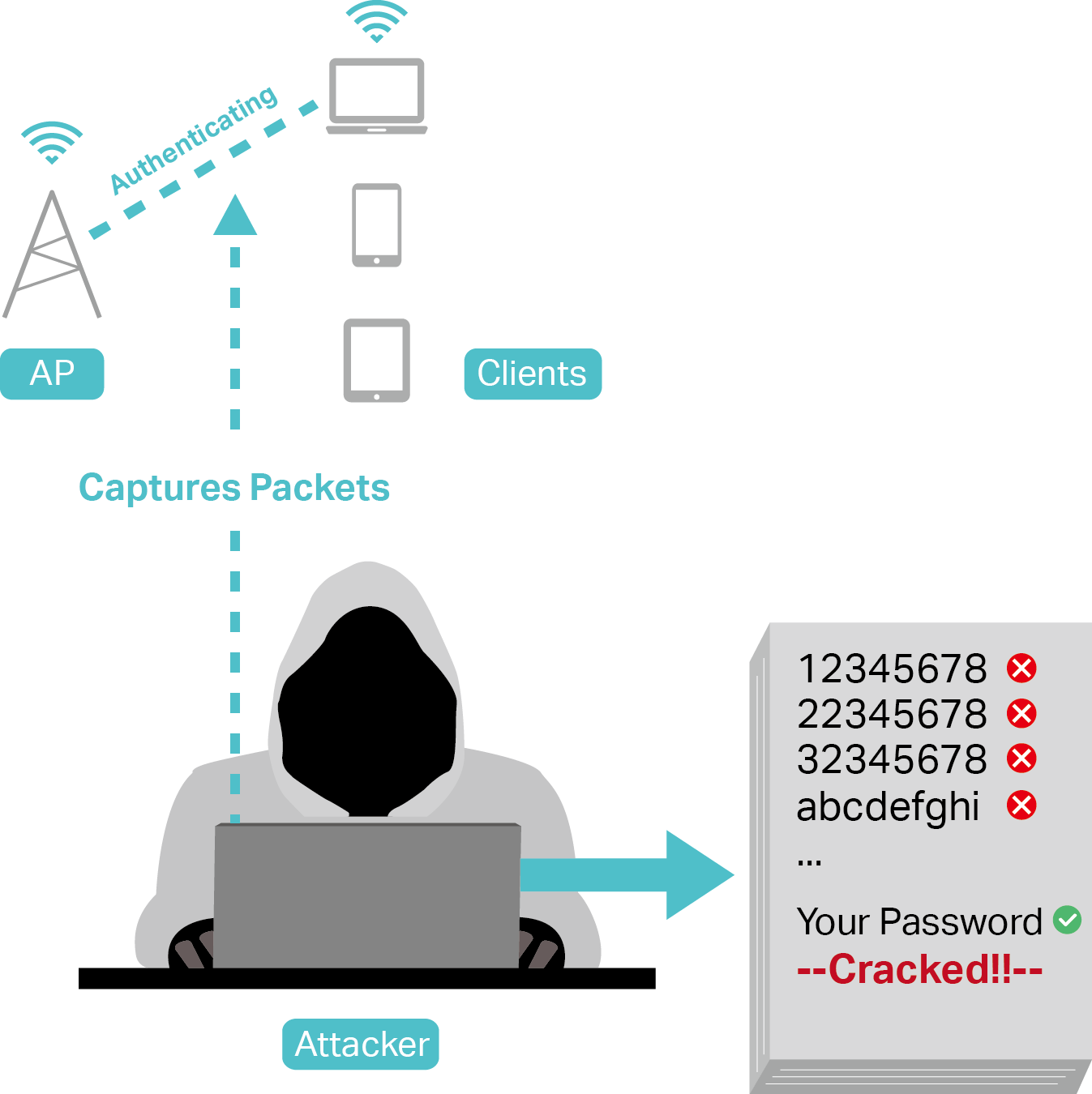 However, you need not even worry about this with WPA3. With SAE, you can even use simple passwords, like your birthday or phone number. This is because attackers can guess only one password per authentication chance.

They could not continuously guess the password by analyzing the packets for a single authentication. Instead, they would have to intercept the first packet and guess, then the second packet and guess, the third, fourth, fifth…and would ultimately give up because it takes too much time and effort.

Before 2017, WPA2 was still considered relatively safe, although some unexpected visitors may connect to your Wi-Fi via offline dictionary attacks and share your bandwidth. However, Key Reinstallation Attacks  (KRACK) change this.

Every attentive Wi-Fi user and vendor panicked when Mathy Vanhoef, a wireless security expert, published details of KRACK in October 2017. It revealed that KRACK attacks intend to steal your sensitive information like credit card numbers, passwords, emails, and photos.

A KRACK attack can trick clients into reinstalling the key by disguising itself as the AP and interrupting the “4-way handshake”. After the key is reinstalled, attackers can decrypt the traffic and steal sensitive information.

It should be pretty clear that SAE effectively prevents offline dictionary and KRACK attacks. Moreover, if attackers manage to crack the encryption key, it minimizes the loss with forward secrecy.

What is forward secrecy? In WPA2, if attackers had the encryption key, they could then access previously recorded traffic. That is to say, when the key is cracked, it’s not just that your future traffic has been compromised. Attackers could crack your past traffic they intercepted as well. With WPA3, the past traffic is safe, because the encryption key is changed every time a new connection is established.

To ensure a smooth transition from WPA2 to WPA3, the Wi-Fi Alliance designed a transition mode for SAE: WPA3-Personal Transition Mode. This mode allows WPA2-Personal and WPA3-Personal to operate simultaneously on a single wireless network. It determines which one to use according to whether or not the client supports WPA3.

192-bit security aims to provide a more reliable enterprise network. It is a fresh feature in WPA3-Enterprise. It enhances network security by upgrading the currently used 128-bit encryption to 192-bit. The more bits, the more difficult it is for attackers to crack the encryption key.

WPA3-Enterprise does not have a transition mode because the 192-bit security is an optional—not mandatory—function, and it does not fundamentally change or replace the protocols of WPA2.

With the help of SAE and 192-bit security, WPA3 provides higher security for both homes and businesses. But is WPA3 “100%” safe?

Mathy Vanhoef, who discovered the KRACK vulnerability, already found two kinds of flaws in WPA3. The flaws are called Dragonblood attacks. But you need not worry too much as it will take a while for WPA3 to fully roll out. Thanks to Vanhoef, engineers can fix the flaws before WPA3 is widely deployed.