[Update: To allow for version switching between different versions of the controller, V3.2.10 received an upgrade. You can install it over an existing V3.2.10 without losing data.]

I just made a .deb package with Omada Controller 3.2.10 for Debian, Raspbian and any other Linux system providing the dpkg installer. Please find the release notes at the end of this post.

This .deb package is in the tradition of the community version of Omada Controller, meaning it contains the same Java classes and remaining files as the official TP-Link version except for the binaries bundled with it (JRE, mongodb) and the start/stop script control.sh (which is replaced by my own version omadactl).

You will need netstat (package: net-tools), curl and the native versions of JRE, jsvc and mongod (installed by default in Raspbian based on Stretch, unfortunately not so in Debian). Setting up the Oracle JRE and jsvc is left to you as an exercise; here are some suggestions:

Debian and any other Linux distribution:

Install mongodb from the standard repository and JRE8 from Oracle's website. As for jsvc, don't use the Debian binary package, it requires OpenJDK last time I checked this. Instead, get the source code for jsvc (command apt-get source jsvc), compile it and install jsvc manually. Sorry for this inconvenience, but TP-Link decided to use jsvc for Privilege Separation rather than the much more common standard start-stop-daemon or daemonize programs already present on almost any Linux system. Don't blame me for this – omadactl still can use both methods, but you need to use jsvc for Omada Controller versions V3.x.

Oracle JRE8, jsvc and mongodb are pre-installed by default in Raspbian (make sure you did not explicitly choose OpenJDK as an alternative for the Oracle JRE). You can easily check whether the required programs are installed on your Raspbian:

Compare the checksum of the downloaded .deb file for integrity:

First, make a backup of your Omada Controller's settings before installing. Either use the web UI or copy the whole content of the subdirectory data in /opt/tplink/OmadaController to a backup directory. You can later move the data directory back into the new controller version.

Install the new version of Omada Controller with:

After a successful installation the controller will be started automatically.

There is an easy way to restore your controller's settings using omadactl. Let's say you want to update Omada Controller 3.2.9 to 3.2.10. The directory OmadaController-3.2.9 will be cleaned by dpkg before it installs the new version in a new directory OmadaController-3.2.10. However, user files will be retained (dpkg prints warnings about which directories are not removed). Now stop the new controller using omadactl and use omadactl with the copydb command:

This will copy all settings under the data subdirectory from the old version to the new version. Restart the controller and you will see all your EAPs, settings, maps etc. If everything works, you can safely remove the old directory using rm -rf OmadaController-3.2.9.

Keep in mind that under Rasbian, which still is a 32-bit OS for compatibility with older Pis, mongodb has a 2GB limit for the size of the database. You could compile a 64-bit kernel / userland programs to get rid of this limit.

If Omada Controller doesn't start automatically on reboot of the RasPi, check with systemctl whether the omadad.service is enabled.

Omada Controller on RasPi is slooooooow, especially if initializing the environment at the first start. Start it with omadactl -W 240, note the time it needs to start (omadactl will print a message) and set the time + a 10 seconds reserve using omadactl -S num, where num is the new time-out in seconds (see the manpage).

For help with omadactl see its manpage attached to this post or use the command: man omadactl2

For customization of omadactl see the config file /etc/default/omada.
Update: has been merged into file CONFIG in /opt/tplink/OmadaController.

For selection of the correct JRE see file CONFIG in /opt/tplink/OmadaController.

For a list of all files installed by the .deb package use the command: dpkg -L omada-controller

If you want to uninstall this .deb package (except the database and other files created at run-time), use the »remove« option of dpkg: dpkg -r omada-controller

If you want to uninstall this .deb package (including the database and other files created at run-time), use the »purge« option of dpkg: dpkg -P omada-controller

What RasPi model do you use?

Run the following commands to see debug and error messages from the server. It usually prints the reason why it can't be started: 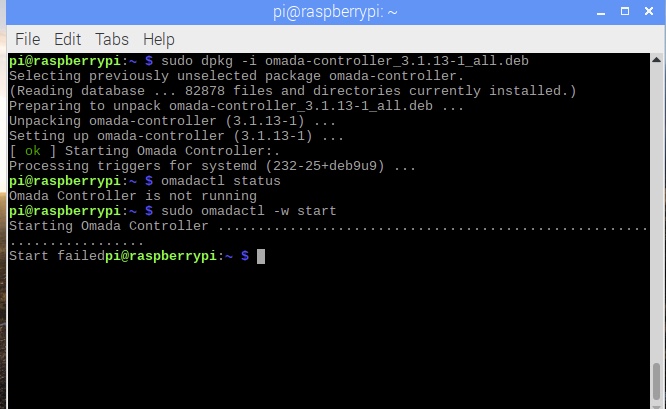 What RasPi model do you use?

Run the following commands to see debug and error messages from the server. It usually prints the reason why it can't be started:

Grbz, did you solve the problem?

How many AP can manage Raspberry Pi 3 or 4 version? anybody have this information?

What will be more profitable to buy, os200 or Raspberry Pi?

Tryin to get this running on my Raspberry Pi 3B+ and my java and mongod versions are the same as you posted, but I get the following eror when installating the package:

Edit: Nevermind, just had to do apt-get install jsvc and it worked! Thanks!

Installation works well. Great idea at all! Just forgot the jsvc before. Struggling now with apt-get source jsvc E: You must put some source URI's in Your sources list. Could someone just help me on that? Thank's. Tilo

jsvc is part of Apache's Commons Daemon. Search for commons-daemon, donwload the source. Go into the jsvc src subdirectory, compile and install only the jsvc binary, not the comons daemon Java classes (they are in the TP-Link classes already).