[Experience Sharing] High speed on the router, low speed on my pc

And recently I got an upgrade of my bandwidth from the previous 100Mbps to the new 500Mbps from my ISP.

So I also make my computer and the router upgraded for the peak gaming experience due to the limitation of the Virus.

Before the upgrade, I can get the full speed of 100Mbps which means about 12MB/s download speed from the steam server.

But here comes a really bad experience after that, I can only get the download speed no more than 1MB/s with all the stronger devices.

That did make me confused, and I searched for multiple articles about issues like low-speed problems and also tried to reset the whole network on my computer with command.

Then I noticed my new router, the TP-LINK ARCHER AX11000, it always shows that I get 500Mbps with the webpage speed test of the router.

I don't have that many devices as a gamer to connect to the router, so there should have no other devices stealing my internet speed from 500Mbps to less than 10Mbps.

I've also tried resetting the router for a couple of times, but still do no help with my problem.

So I've to ask help from Microsoft support, but they only give me the advice that I can search from Google, keeping reset and reset my computer's network configuration.

But none of them take effect as I've tried them before, then, at last, they just told me to re-install my Windows 10 system.

I've so many games and many personalized software in my system now, and it never let me down before. So nobody wants to re-install and re-configure the system if there's still something that I can try.

Then I try to get to the TP-LINK, where I can get the free technical support after about one week communicating, we arranged the remote access last Friday.

At first, my support engineer just checking the speed and router setting for a while but it seems they didn't find the problem there like I do.

But soon, they turn their goal to the software that I've using for years.

So I closed my Discord, LoL Client, and Steam to check again, but still no help.

After that, they tried to download the speed test application from the official page.

Pretty strange that the application is getting speed so fast than the webpage, which can reach 500Mbps as it should be.

But my computer's download speed is still too slow even the speed test app is getting high speed.

Then we tried to check out the software that I've on my computer to see which one is the bad guy for limiting my Internet speed.

At last, we found the pre-installed software that comes with my new computer, the Killer Control Center.

In the settings, there's the option named Internet provider speed, and the download speed is 6Mbps when we get to check it... what a pity!

It's just a wireless network card driver and utility, but it also takes the control of my Intel wired connection.

And I've tried to close this software before, but still doesn't solve the issue, only when I changed the setting here, the limitation on my computer is finally away!

I bet that this Control Center still keeps in the background even after I close the application!

And it also takes me a long time to find this little 'Bug' out of my system, pretty annoying.

You can check the settings here too:

And according to the support engineer who helped me found this bug, there's also a similar issue with security software like Norton, Avast and Bitdefender, they will cause problems like this too because there's setting in them that can be used to set limitation for the computer and cannot fully exit(there's always the background process of them due to the name of 'Security'), so the limitation will exist all the time. 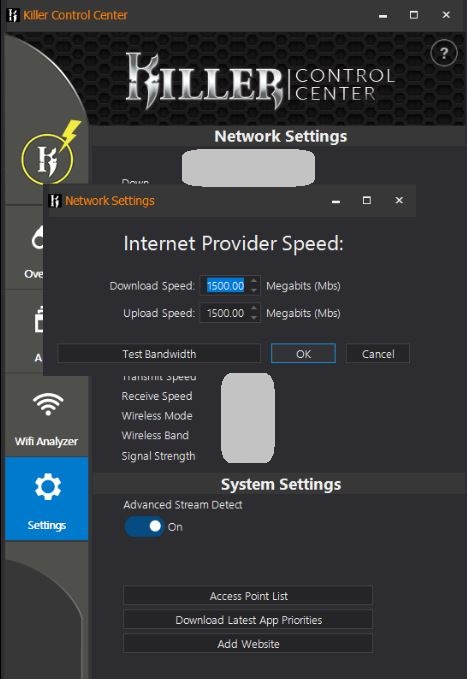 I have also discovered that Dell's SmartByte servie would aslo cause such issues.

I have a 1Gbps broadband from my ISP, my AX6000 router's webpage speedtest results are 943Mbps download and 901Mbps upload.

On my desktop PC, it was 900+Mbps both for download and upload as well.

However, on my dell laptop, I have only got 200Mbps download and 200Mbps upload.

When I directly connect my dell laptop to the modem offered my my ISP, it was 900+Mbps as well, so I contacted TP-Link support.

After spending a few days troubleshooting this issue with TP-Link support staffs.

They have figured out that this issue is caused by Dell's SmartByte Service, it is some kind of network management tool, not much useful to me, personally.

After disabling SmartByte, my dell laptop can get 900+Mbps with my Archer AX6000 router as well.