Just "upgraded" from my AV500 pa451 kit to the new av1200 PA8030P kit, hoping to see a little bit of a boost in speeds especially with the gigabit port of the new ones.
What I have instead seen is a *decrease* in bandwidth with the new adapters. Typical bandwidth using the av500 adapters was around 92mbit/s as measured by iperf and I was wondering if I was maybe starting to butt up against the 100mb ethernet on these devices hence my upgrade. The av1200 seems to top out at about 60-65mbit/s using the same locations, cabling and computers to test between.

Now I wasn't expecting miracle boosts in bandwidth, but I expected at least the same as before (the extra built in ports are useful on their own for my purposes), but I certainly was not expecting to see worse performance from a new generation of hardware.

I also bought the AV1200 expecting better speeds over my AV500 & AV200 but was very disappointed to find that in the same location of my AV200 that the AV1200 performed worse !

cptweasel
LV1
2016-02-11 10:06:47
Posts: 2
Helpful: 0
Solutions: 0
Stories: 0
Registered: 2016-02-06
Re:av1200 TL-PA8030P slower than av500 tl-pa451
2016-02-11 10:06:47
So I purchased two more to do some testing. I placed on on the came circuit as the one labeled "Office" in the screen shot. The other one I placed in a room on the same floor. I simply do not see anything close to Gigabyte speeds, and actually a far cry from it. The two units are guaranteed on the same circulate, so TP-Link can you help me understand the poor rate shown in the software? I would say that the 249Mbps is encouraging but when dropping pc's with GigE connections I still am unable to do large file transfers greater then 60Mbps. Is it possible this product simply is unable to achieve listed speeds and through put as advertised? 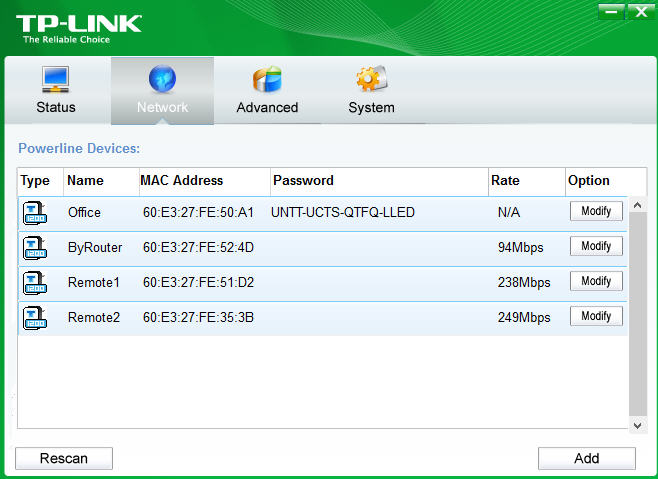 Sorry to bring this thread back from the dead, but I am having also a slower speed from my AV1200 adapter when replacing a previous AV500 adapter.

The thing is, in the same house, same setup, same power outlet, connected to the same router, same computer connected to the adapter, absolutely no other change than replacing one of the AV500 adapters with one AV1200 adapter, results in 1/3 of the internet connection speed (measured using Google's Speed Test and Okla's Speedtest).

Has anyone had a similar situation and found some solution?