Happening 2-3 times a day the connection will drop for anywhere from 30 seconds to 5 minutes and then generally return by itself. A couple of times I had to unplug/replug the unit to get it working again.

When it happens I notice the middle light goes red for a number of seconds then back to flashing green and everything returns to normal when I get a solid green again.

I also have 4 x AV500 and 2 x AV200 and this doesn't happen to any of these devices (2 of which haven't been unplugged in nearly 3 years), no IP address conflicts, the DSL isn't dropping, the router is fine. The AV1200 drop if just connected on their own with none of the other powerlines connected so its not interference.

I have a strong feeling this is a firmware issue as I see 3 other posters with the same units, only the 1 port version and they are describing very similar situations.

It affects most models in recent years.

If they were going to fix it (or even acknowledge the problem exists) they would have done so a long time ago. People have reported it for years and yet they keep releasing new models with the same flaw.

You can try constantly pinging your router (In command prompt: ping 192.x.x.x -t), many report it keeps the connection alive.

When the connection drops you can usually bring it back by disabling/enabling your network adapter.
0
0
#2
Options
Posts: 3
Kudos: 0
Solutions: 0
Stories: 0
Registered: 2015-09-29

I'm having the exactly the same issue, been emailing support back and forth now for two weeks, they keep telling me to try different things but it makes no difference. Only happens with the AV1200, never had any issues before when I was running AV500 plugs.
Think its a firmware issue, but TP-Link refuses to say.
0
0
#3
Options
Posts: 2
Kudos: 0
Solutions: 0
Stories: 0
Registered: 2015-11-09

I have just installed new pair of AV1200. What is noticed that on one connected to router DATA light always green but on the other one that i put just behind my TV (connected to TV, Dune HD and WD lite boxes) DATA green for some time then it red then again green (green light never stable). IPTV works in HD and looks fine but if DATA is red then what is the difference to use just simple WiFi, i presume the result will from stability should be the same?

My previous AV600's never dropped out, but with these AV1200's connection drops quite frequently.

I would be watching a movie via NAS, then it'll just stop... I have to wait a minute or so before it reconnects and then I can resume.

Just upgraded so will see if there are any improvements.

Basically I noticed I was having issues/blips in my connectivity - sometimes just for a few seconds and sometimes for minutes at a time. Even when it was for a few seconds it was long enough to disconnect the VPN I use for work so it was annoying. At the same time the middle light would flash from green to red then back to green.

I downloaded the tp-link utility ( http://www.tp-link.com/en/download/TL-PA8030P-KIT.html#Utility) and used this to see my network. I noticed that there were between 1-3 AV500 devices that kept showing up when the connection went red and I assumed this was due to an issue with the devices/firmware, however when I tried to connect to my router I randomly noticed a load of extra devices added that weren't on my network and things I knew were on were missing! Essentially I worked out that the issue was that my neighbour has some wirless TP-Link devices (they show up as AV500) and uses a similar provider to me (BT subsidiary). His AV500 devices were patching into my network and instead of routing through the powerline my devices were going through his network (wirelessly) and out through his router which has the same stock default gateway (192.168.1.254 unsurprisingly). I didn't know this was possible when the AV1200 isn't wireless but it was definitely the issue as I've now fixed it - maybe this is a new feature on the AV1200 devices which is why people are having issues with those and not the older models? I think the different length of network outages/blips were due to it flip-flopping over or straight up having asymetric routing and losing packets.

Given the amount of people that use BT/Plusnet etc routers with the same gatewat and who don't change the network on their TP-LINK I'm sure I'm not the only person to have this issue. To find out if you have the same install the utility and look at the network tab to see if you can see more devices than you expect to see on your network. If you do then to fix the issue use the utility and connected to each AV1200 device and changed the name of the network from the stock value (HomePlugAV) to the a bespoke value. In my case as soon as this was done my neighbors AV500 devices no longer accessed my network and no longer randomly appeared; Since then I've not had a single red light or (touch wood) network issue!

I now have three TP-LINK TL-PA7020P plugs, everything appears to be much faster now. I get speeds of download 37 mbps & uploads of 9.36 mbps on both my two computers when using http://www.speedtest.net/

Here's proof of plugs I have bought & tested. 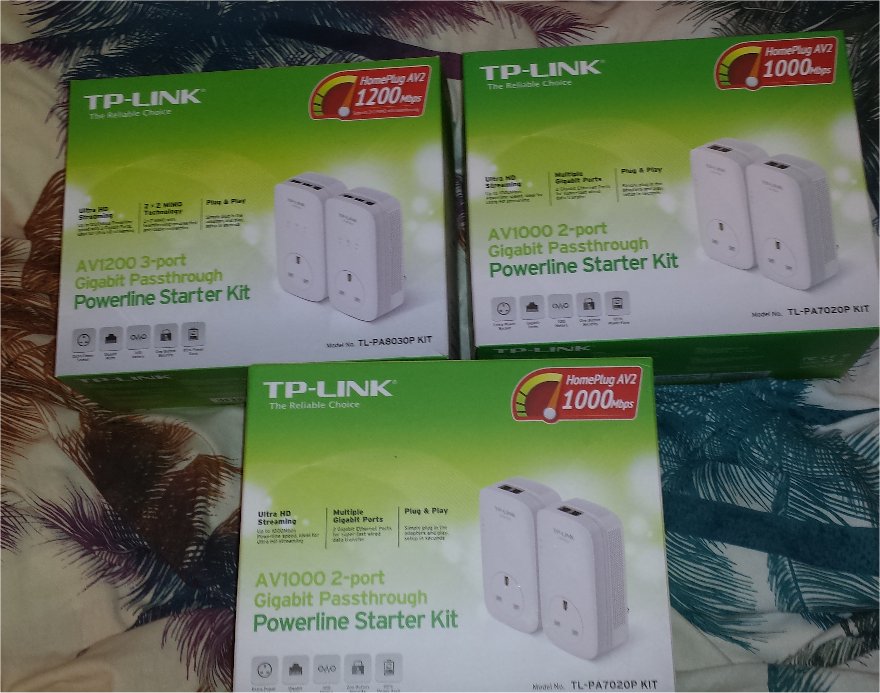 I was getting drop outs, and when I used the TL-PA8030P KIT AV1200 to connect another computer in another room, my internet speed was much slower.