my Archer C7 v5 is emitting a hidden wifi network that I can't explain.

According to a wifi network analyzer, it's MAC address is identical to the MAC addresses of the 2.4 and 5 GHz network, except that the first 6 entries are AA:DA:C4 instead of the TP-link associated 98:DA:C4. The hidden network has same maxium speed of 216.7 Mbps as the 2.4 Ghz network and allows authentication via WPA2 PSK-CCMP.

The hidden network exists independent of the operation mode (Acess Point or Router) and also if both the 2.4 GHz and 5 GHz networks are disabled.

Any ideas what that is?

Hello all, if you require to disable the Onemesh hidden network on the TP-Link router, please refer to this thread we've updated to find a solution:

Hello, we have not received such feedback yet.

Would you please show us a screenshot of the wifi analyzer page where you saw the hidden wifi network?

Meanwhile, you mentioned it allows authentication via WPA2 PSK-CCMP, how did you connect to it? By entering the wifi name manually?

Please show us a picture of the wifi connection process as well.

Thanks a lot, and have a good day.

here's the output from Acylic Wi-Fi

'MtVentoux' is the Archer C7 and as you can see shows two networks corresponding to the 2.4GHz and 5GHz band. In addition, you see the '[Hidden]' network with the same MAC address as 'MtVentoux' except for the first two characters. I know that the network comes from the router, since it's not there when I turn it off.

We are confirming with our engineers now, any updates, we will let you know immediately.

No extenders, no repeaters, and yes, the wifi goes away when the router is turned off.

Could someone else have added an extender or repeater to your WIFI signal? Or one of your WIFI devices causing it.

Things I would try...

3. Re-set to factory and reenter your specs.

Let us know what you find.

I'm also having the same problem on the same router. This hidden SSID shows up on both 2.4 and 5 GHz, mirroring the SSID that I configure on both channel.

The hidden SSID are intermitent, they will appear for 10-15 seconds, disappear for a few seconds and reappear again.

And as Aquafox said, the first 6 entries are AA:DA:C4 instead of the TP-link associated 98:DA:C4.

While Aquafox doesn't use any extender or repeater, I actually have two extenders on my network, one RE200 and another WA850RE.

I think this confirms that the problem is caused by the router itself, not external devices or anything.

This is a newly bought router, I just purchased it today and finished configuring it just now. I upgraded the firmware to the latest before configuring.

Btw @Aquafox , how long have you used the router? Did you notice the hidden SSID just today? 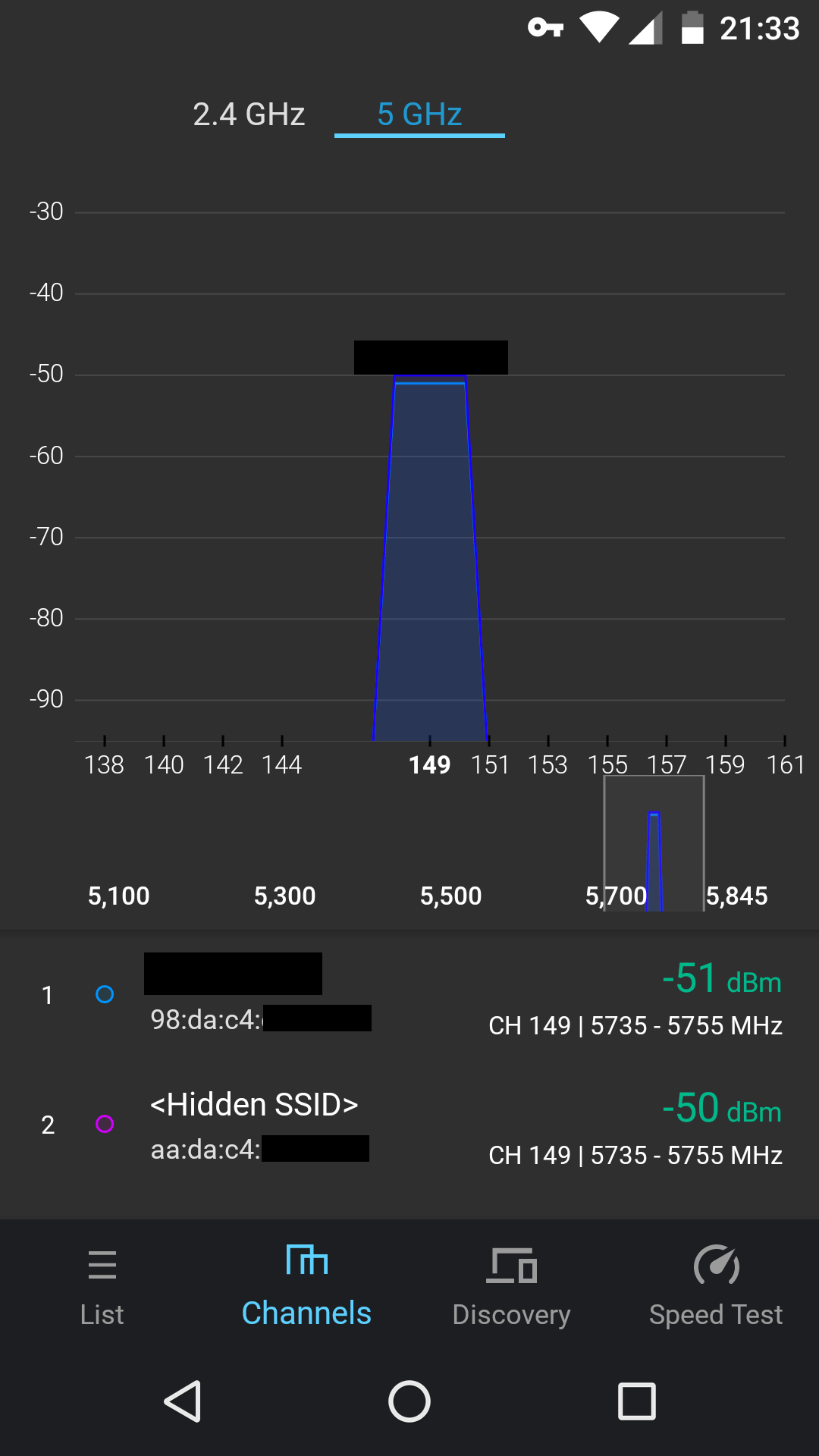 Found a related issue from someone using TPLink TL-ER604W. Looks like this is a known behaviour on TP-Link routers.

@lemon Interesting that you see the same Mac-Address behaviour. I have the router for about a week but noticed it immediately.

I'm not an expert in Mac addresses. Can one physical wifi-card (of the router) have multiple Mac addresses simultaneously or does this point to a second WiFi card?

@Aquafox I have no idea

I worry whether this will have effect on network performance (or maybe hardware life) or not, especially because it's intermittent.

If the Hidden SSID just stays there without disappearing every few seconds, I would have less doubt.