AC1300 keeps dropping since i upgraded from Windows 7 to 10

Since i have upgraded from windows 7 to 10 my connection keeps dropping.

It's reaching a point where it is becomming unbareable.

I have searched the internet and many have this issue but i have yet to find a solution that works.

Does anyone have any suggestions...

Have you ever installed the driver for Windows 10 after you upgraded it?

Besides, you can refer to the instruction below to do further analysis.

What should I do if the TP-Link network adapter is not working properly in my computer?

Yes i have installed the windows driver.

I cant relocate the router (sadly).

IT worked fine under Windows 7

I saw that in stead using DHCP setting the network values fixed would help.

For a moment it did but after some issues windows resetted my network settings  (Troubleshoot problems) and its back to DHCP.

I tried not using my VPN (Nord VPN) but that did not seem to make any difference.

Curently it seems to be ok (knock on wood) but i dow get occassional dropouts but not as often as in the beginning of my upgrade to Windows 10.

Since its ok. I'm afraid to touch it. while its ok i would not call it reliable. For games however this is important.

I got this one because  of the good reviews and high performance.

The son of my girlfriend (in the same house) has one as well (also windows10) and his seems to do fine.

On a side note on my ethernet i have my NAS (Synology DS411+) and i tried to bridge my connection This opens up a whole new can of issues in terms of stability and internet access. But i will admit i can't confirm that this is related to my initial issue. I know my way around a computer (i started with DOS 3.21) but so far i have been unable to pinpoint the issue.

I have the same problem with my T4U v3

Windows keeps using the "TP-Link USB-Adapter driver"  "date: 25.10.2018" the date is important later.
This driver does not work very well. It produces dropout every 5-10 seconds (recogniseable in gaming and downloads)

The problem is the following: Windows uses the newer driver with every reboot.
The newer driver is a generic driver from microsoft. Not from TP-Link.

so in order to fix this problem you need to uninstall the generic driver and reinstall the TP-Link driver.

Please release a newer Driver @TP-Link!! so windows can pick always the newer one and therefore the right one.
(Just edit the date an resign it, that should do it). Btw the TP-Link driver works fine in all aspects.

Ok i went from: 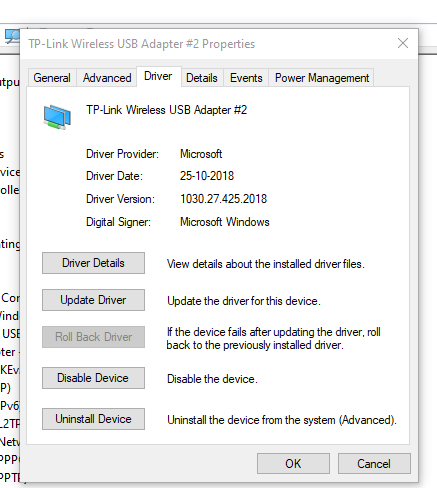 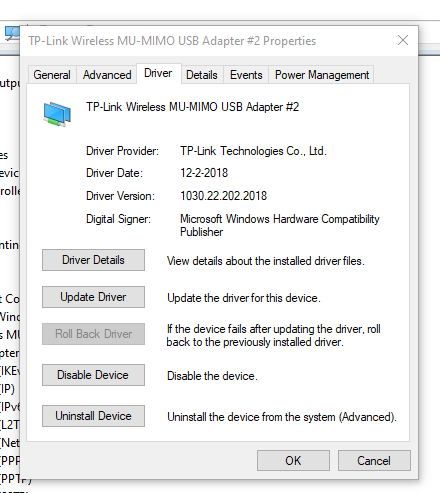 Have to see what this does to my stability and if windows doesn't decide to renew the driver. As i recall having done this before since i had to uninstall my tp-link drivcer after uninstalling my device.

Exactly the same reported as many users included my self.

It does not hold, windows 10 reverts the driver.

When i put the USB dongle of my strepson reception immediatly increased so did the speed. (it doubled) sop i send my dinbgle back for repairs.

Stil Reception was HORRIBLE. Here at the attick as well as in the bedroom or living room. I was fed up wioth all the issues so i bought M5 Deco a set of 2.This solved the issue partialy.

I Ended up buying a 3th unit for the attick. (I know im anidiiot i should have bought the 3 set from the beginning) Annyways. The M5 Deco is 1,5 meter away from the dongle and reception was still horrible even on the bedroom of my step son.

NEVER EVER had i such good internet here in the attack and my stepson did the same.

My wifi issues are solved though not in the way i wanted. I have 1 dongle im not using anymore and i have a brand new one in the box (unopened).

So the wifi connection between the deco units is good but the dongle is crap. (at least the reception is).

Im conflicted as what to think of these wifi dongles......

These dongles are not recommendable now with latest windows update and this crappy drivers.

You will get no value for the money.

I did a test yesterday, I format my computer install all from cero, prevent windows update drivers, but as soon as I plug and plug in the thing it reverts back the driver.

Today I will go buy another brand... never again TPLINK