Fail to log into the web management page of Deco P9

I have a problem that I I'm not able to connect to the Web Console of my Deco P9 (https://www.tp-link.com/en/home-networking/deco/deco-p9/).

I've already seen the guidelines in the link below, but they didn't work.

Could you help me?

Hi Carlos, the Deco P9 does not support web UI now, that is why you cannot access it.

The new feature will be added with firmware upgrade. You can wait a while and keep an eye on Deco app for the updates.

Hi Carlos, the Deco P9 does not support web UI now, that is why you cannot access it.

The new feature will be added with firmware upgrade. You can wait a while and keep an eye on Deco app for the updates.

Many thanks for the reply!

I will wait for the firmware update and keep an eye on the update of the app.

Do we have a date when the new firmware version will be released?

Thank you one more time!

Have a nice day!

Thanks for your reply and you are most welcome. It is glad to help you.

The estimated release time is still unsure, while the engineers are working on it, once it is ready, it will be posted on the official website.

Thanks for your reply and you are most welcome. It is glad to help you.

The estimated release time is still unsure, while the engineers are working on it, once it is ready, it will be posted on the official website.

Just to reinforce this request, because the P9 definitely needs a Web Management interface.

I got one kit to use instead of a Powerline that was having constant powerline between the adapter and extender, and once the DSL connection failed on me, and when I tried to check in the app to see if the was the Deco's problem or the router, the app couldn't connect to Deco network, because it seems to go and check the cloud instead of directly retrieving the information the DECO network,

We have noted that. Back to your case, we can do further troubleshooting.

1. The current network diagram of the whole network.

2. The led status of Deco P9 when DSL connection failed on you.

3. Is the DSL connection an internet source?

1. A crude network diagram is: 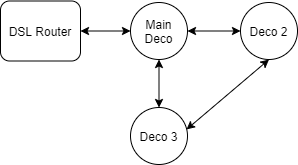 Main Deco and Deco 3 are directly connected to the power outlets in order for the Powerline backhaul to work. Deco 2 is plugged to a extension, actually power cube, as there are no free outlets on the required location, and it's not an option to move as I required the network cable to connect do a device in the proximity

2. The lights started blinking red when it failed

After restarting the DSL modem everything started working again, but when the problem happened I wasn't able to check the Deco status as it seems to only look for it online and it wasn't an option. Also there's way no check the powerline status. Main Deco and Deco 3 are quite a bit apart, that's why I got the P9, to have a backup if there wasn't enough range, and this house has no ethernet ports anywhere

HI I see that no one has replied after you provided the diagram.

I am not and expert on the P9.  I just found out that there is no web managment access today.  However, I do rememebr reading that backhaul can go through powerline or RJ45, so maybe you could run and ethernet cable between Main and 2 or between 2 and 3 to establish another backhaul connection.

Thanks for the advice, but it's not really feasible. It's a two storey house,  with no ethernet cabling and passing the cable between the units is not really an option. That's why I went with the P9s, to have the PLC as backhaul, preferably, or in case WiFi wasn't enough due to the distances involved between units.

Anyway, I did get a second set of P9s and they work better now. The fact that the ISP changed my router, due to the other being partially fried in a thunderstorm, also helped as I can enable bridge mode in this router and set the Main Deco as a router, instead of just Access Point.

I also tried the Beta firmware and it's definitely an in improvement. You have more configuration options and a somewhat functional Web Interface.

Still, I can't help but feel disappointed with TP-Link. They're relatively cheap and widely available where I live, and all products that I owned before at least came with a web interface that allow the needed configurations. The new ones, with require more management functionalities, seem to lack the basic part, and the update pace is too slow. In the particular case of the P9 there's not an official release since the original one, more than year ago. Another product that I had a interest on was the MR600, for which my use case would be to use 4G as a failover to my crappy DSL, and that one also hasn't had any update since lunch.

Onemesh seems to be a great idea too, but the Coming Soon part seems to never get updates. Most products with support are range extenders, which I'm not a fan of, because they're always limited by the connection to the router, and even those, none of the supported ones have passthrough. I don't feel like losing sockets needlessly.