Connection keeps dropping randomly multiple times a day, but only on one specific device

I am pretty desperate as my VR300 router does my headache each and every day by randomly disconnecting from internet. Weirdly enough only one device (the most important in the network) suffers such problems.

My network consists of several wireless devices including laptop and mobile phones and a main desktop computer that is connected via TP-Link AV600 Powerlink and wireless usb dongle as a backup.

1.) made sure firmware is up to date on all hardware

3.) weirdly enough, when I check the other devices connected to the same network - they are always connected without problem, so it is not that router will not have connection. It simply only drops it for the desktop.

4.) Checked my adapter settings and tried to change the DHCP to static IP hoping that this might resolve the problem. Went to router settings and set up and reserved static IP for each device seperately. However, problem persists and adapter settings keeps changing automatically for some reasons when manual IP is set up in Windows 10 adapter settings. Default gateway IP tends to disappear from the settings despite being manually selected and saved. The common error given is that DHCP is not enabled, so internet could not be estabilished. But why would I get this error when I set static IPs, I have really no idea. Also IPv6 protocol keeps re-enabling itself despite I've swtiched it off in Windows manually (my VPN does not like it)

So I am really out of options, don't really know why is it that only one device gets primed for disconnects on both wired and wireless at random. Often, the icon on the taskbar showing wired connection does not even change to offline version and keeps telling me that internet is connected, but no website can be reached.

Disconnects range usually from under 30secs up to several minutes sometimes, which is extra annoying and there is no way telling when they will happen next.

It would be really great if anyone could help me understand and resolve this problem as I searched internet and forums a lot without any luck.

@SixThe9th wow, it is really nice to see that there is so many experts here in TP community, yet I'd think this might not be such a drastically unique issue. I am adding several screen shots to map the problem and to show my setttings, hope that would bring someone to the table to actually help me with this incredibly obnoxious problem. 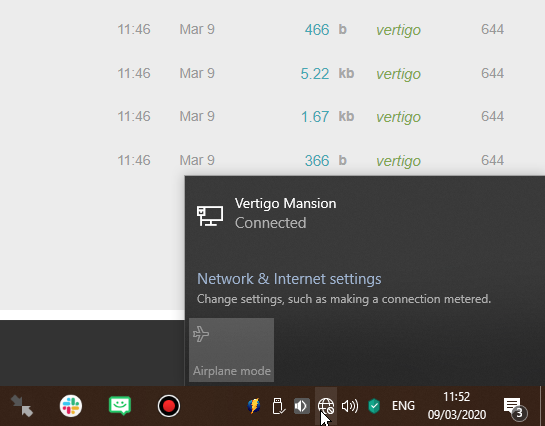 Pic1: As you can see, this amazing situation keeps happening every and each day at unpredictable moments. Main PC is offline while all other devices are online. 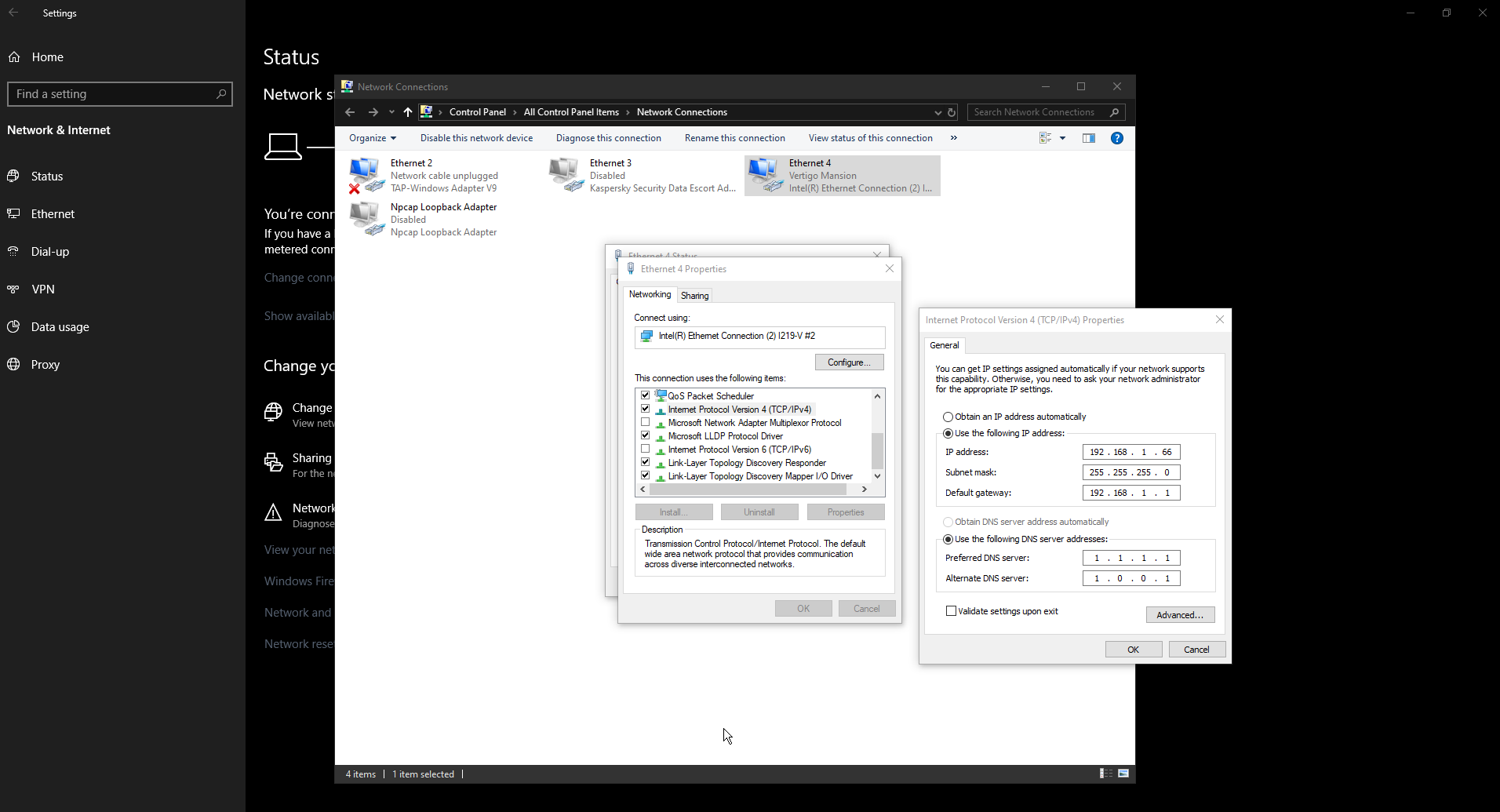 Pic 2: My adapter setup. After DHCP started this issue, I assumed it does not work properly and reserved static IP for each device on the home network from the range 192.168.1.2 - 100. IPv6 is disabled by default as my VPN does not support it. 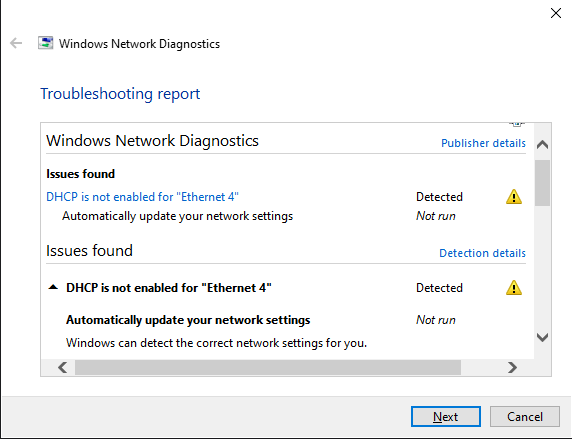 Pic 3: So here we are, today already 4th dropout :) Why the hell I am getting this error when I am using Static IP? Reason why I am not using DHCP is because I got regular dropouts. But I am getting the same on static IP, no matter which I choose, that does not seem to solve my problem :(

Thanks to anybody who at least knows what problem I am experiecing.

@SixThe9th to make things even more interesting, after being repeatedly pissed off by this mysterous hardware hiccups today, I rolled back to DHCP thinking naively that things can go better, but no. Not long after my last post internet dropped again, this time Win 10 presented me with another juicy error - default gateway not found lol 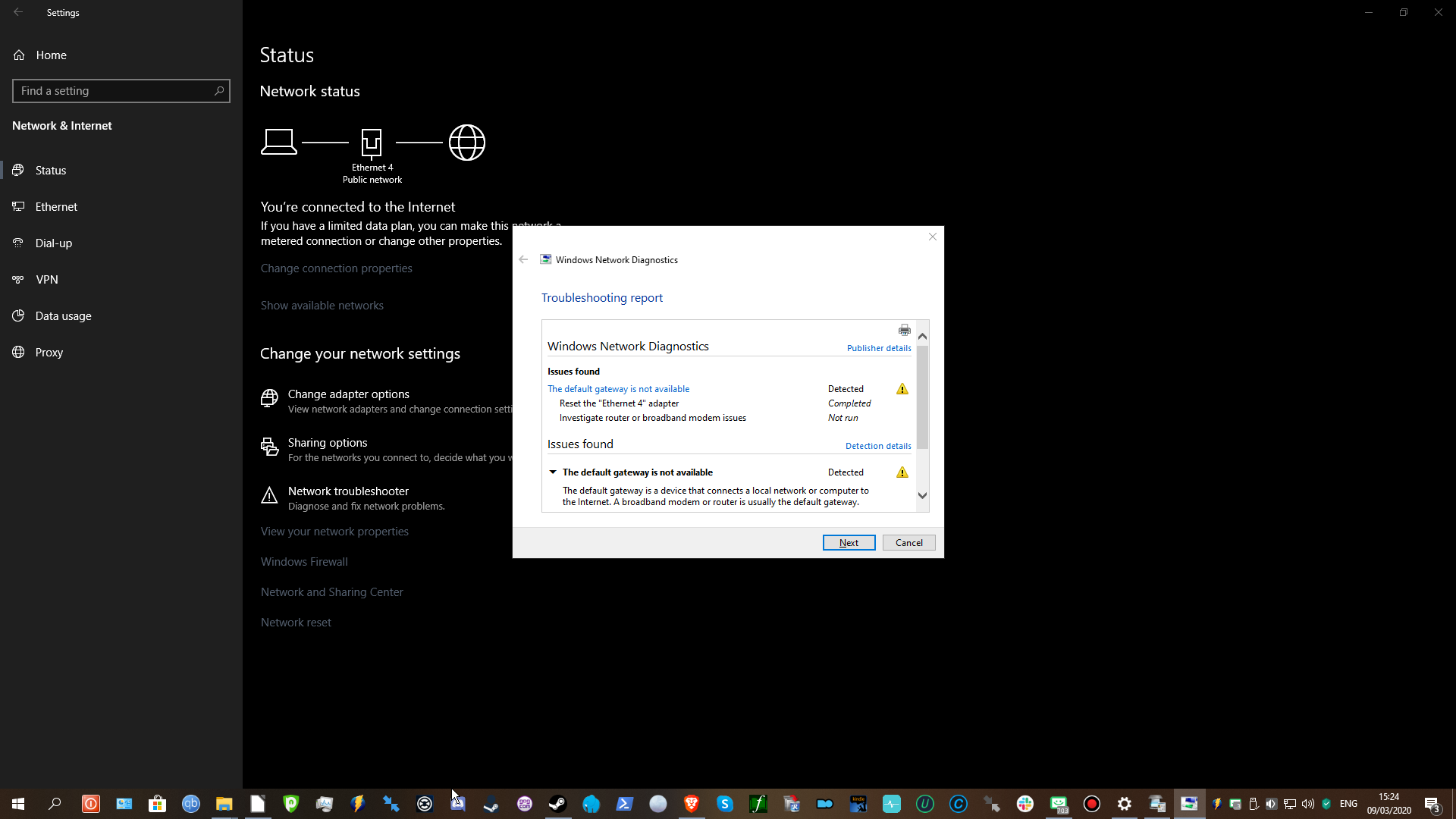 @SixThe9th I am having the same exact issue, and its only with one device! And it happens to be my cell phone. The only solution that works, and that includes tweaking settings, is a reboot of the router. Its almost like some time of block goes out to that specific device for some reason. It’s the weirdest thing

i do not know 100 percent if the problem has been fixed, but i believe i have identified the setting cause the issue here. There is a setting called IGMP snooping, and IGMP proxying, in my case i had those enabled, and i believe for some reason the igmp sent a stop transmit message to my device for some reason. And i am hoping that by disabling both of these the issue will not continue. Please let me know if you also had this setting enabled, and if by unchecking it it was resolved for you as well

@SixThe9th these settings are router settings not windows 10 settings. Inside router under advanced options and Internet, there will be 4 different subsections. Im not sure which one it is in, but it is there. have you tweaked any other settings that you feel has helped this issue?

@SixThe9th i have discovered the issue now, and i was completely incorrect about what it was before. The same issue just reoccured and i was able to catch it via logs. The issue is the DOS protection setting. For  UDP packets, you need to completely disable it.  you can find it under the router gui, advanced settings, and then under security tab. What happens is, the DHCP server decides to renew all of your devices at the same time, most likley because just like a normal person, you got your router and connected all your devices around the same time. But what results is a flood of UDP packets, that the router identifies as a DOS attack, and then it quarantines certain devices that it things is guilty, which is why one device gets blocked! You can verify this when it happens by logging into your router page on a non affected device, and go to the security tab and dos settings, and look at the bottom of the page, where the device that is not working should be listed under DOS BLOCKED. please let me know if this helps.

one other side note. I also had issues with my router dropping WAN signal to all devices randomly. This is due to a defect in TP LINKS patch cable.there must be a short, so it looses signal and then cannot find it again without a restart. But by switching it with a good cable this does not happen

@agoldstein54 Thanks for informing me and finally giving me some deeper insight into possible causes of such weird behaviour. I really appreciate this, being in a dark for such a long time in this particular matter was unnerving.

However, upon gleamig onto my router settings, I found the DOS options disabled and I have not touched them since the purchase of the router, which suggests it was never enabled. My current WA that has radically helped to decrease of number of disconnects was to assign my PC a static IP address instead of using DHCP. All other devices do run on DHCP without problems.

In terms of IGMP Snooping, etc. I cannot see no such option under Internet tab, only the WAN Interface Name and its settings, nothing else is listed there.