Besides all the missing features I've got a more concrete problem now with the Deco P9s.

I'm using my P9 3x kit in AP mode, since I've got a DSL router. My router's address is 192.168.1.254 and the main Deco usually is 192.168.1.65. Most of the time it's working, but after a while, some clients, not all, are changing the default gateway from the router to the main Deco, although curiouly keeping as DNS server the router. Whent this happens, the clients can no longer connect to the internet.

One more issue to fix. If you need anything else that I can provide to help, let me know.

May I know the model number of your DSL modem? Will appreciate it if you can give your network topology.

On what clients will you encounter this issue, wired devices or wireless clients?

Due to the description, it seems that Deco enables the smart DHCP option as it fails to obtain an IP address from the DSL router. Smart DHCP is a mechanism that will enable Deco's DHCP server to assign IP addresses temporarily when the front-end router doesn't assign a valid IP address to Deco, so that you can still manage the Deco system although the front-end gateway is dead. Once Deco obtains an IP address, it will disable its own DHCP server immediately.

Next time if you encounter the same issue, please kindly check the client list on your DSL router and find if all the three Deco units are online. Then you can try to ping their IP address from a client that is connected to the DSL router and has internet access.

May I know the model number of your DSL modem? Will appreciate it if you can give your network topology.

On what clients will you encounter this issue, wired devices or wireless clients?

Due to the description, it seems that Deco enables the smart DHCP option as it fails to obtain an IP address from the DSL router. Smart DHCP is a mechanism that will enable Deco's DHCP server to assign IP addresses temporarily when the front-end router doesn't assign a valid IP address to Deco, so that you can still manage the Deco system although the front-end gateway is dead. Once Deco obtains an IP address, it will disable its own DHCP server immediately.

Next time if you encounter the same issue, please kindly check the client list on your DSL router and find if all the three Deco units are online. Then you can try to ping their IP address from a client that is connected to the DSL router and has internet access.

My modem is a Thomson TG784n. The network topology was something like this: 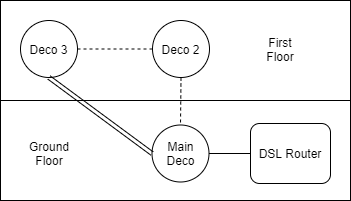 DSL router is connected via ethernet to Main Deco obviously. Main Deco and Deco 3 were connected directly to power outlets, so Powerline backhaul should be available. Deco 2 was connected to a power cord due to lack of outlets.

Deco 2 had the only wired client connected, an IPTV set-top box from the ISP and it was running well. All other clients were wireless.

But apparently the issue isn't restricted to the Main Deco as I though. Yesterday night two equipments that had been off for a while, a Smart TV and an Xbox One S, were turned on. Given they're in the same room, I assume they were connecting to Deco 3, we have no way to find that out currently in the P9s, and the same was happening. Gateway was the Main Deco, but the DNS server was the router. End result, no Internet. A PC that was on roughly in the middle of all Decos was suffering from the same problem.

Curiously my work and personal laptops that I used in the vicinity of Deco 3 never had issues.

Out of curiosity I repurposed my old TP-WPA8630P V2 kit (of which I'm still waiting for the roaming and OneMesh firmware updates) to see if it would help without having to restart the Main Deco to avoid disconnecting all client not physically connected to the modem, but it too received as the Gateway the Main Deco and wouldn't work. Going to the configuration page and forcing the gateway IP address of the router, it started to work.

I can't run any more tests now, as I just ended up disconnecting the whole Deco system and going back to the old Powerlines I had. I had replaced them with the P9 because of the extender started losing connectivity with the Adapter out of the blue, and it was affecting my ability to work. Hopefully they'll hold on until I get a proper replacemente, because I'm returning the P9s tomorrow. Besides the great WiFi coverage, the product just doesn't seem to in condition to be available yet.

@jpasan mine (and everyone else's) does exactly the same. I can still return it to amazon though and get it rufunded and buy a mesh system that works. Is there any sollution to this TP-Link?

After returning the P9s and trying other alternatives that also proved not reliable, I'm considering giving the P9s another go. The P7s seem more mature, but given that 2 cost the same as 3 P9s and I need at least 3, the P9s are seemingly a better choice. Also I given the only backhaul possible I have is Powerline, these are the only two systems that I know have it.

The thing is that the firmware status and that smart DCHP apparent bug, are really putting me off. I happened to have a TL-WR902AC router lying around that I had repurposed as a Wireless bridge to connect my Sony Android TV that just wouldn't connect to the WiFi from the P9s, but it seemed to work. After removing the P9s and connecting directly to the router wifi, the TL-WR902AC seems to suffer from the same problem. I have the option of Smart DCHP and Fixed IP, but the Smart DCHP never did seem to get a proper IP from the router and was giving a different subnet to the TV, which made it not work. In Fixed IP mode it worked, but since you can't even do that in the P9s, it's another cons against them.

Can you tell me if there's any fix for this on the P9s and if there's a chance of getting another firmware? Because as they were it was to random to go on a leap of faith.

Also if there's any commonality between the smart DHCP in the P9s and the WR902AC, then it seems a genereal bug

@jpasan I've been online to support constantly. My "chat" was upgraded to senior team and they have not emailed me in 4 days. Absolute joke. They know it's broken, and they can't fix it, so they ignore their customers.

When your client gets an IP address from the Deco, how about the LED status on the Deco? Does the Deco have solid white light or red light?

Is it possible to configure the address reservation on your router for the Deco to have a try?

Do all clients connected to Deco have problems at the same time? When the problem occurs, how about the IP address of each Deco shows on the Deco app?

@Scoredo as an update to this, they finally contacted me back and gave me the same solution that hadn't worked from previous conversation, and then asked me if the lights were solid, ping when it fails etc etc. So basically the "senior" team are as useless as the normal team and they can't fix there crap product. It's going back in the box and being returned.

I didn't notice the LED status at the moment where the IPs were assigned. Actually the problem was occuring in other clients. My two PCs were working fine, it was other people in the house the were complaining and since I'm tge only one who knows anything about networks around here, when I went to check, I noticed that the Gateway IP as the IP of the Main Deco and not the router. But the IPs of the clients were from the subnet that the router assigns.

My router allows me to disable DHCP and to configure the DHCP as well. But what should I do there? All devices need to be able to reach the router to access the internet.

And no, all clients didn't experience problems at the same time. Phones that are permanently connected to WiFi always seemed to work. A TV setup-box that was the only wired client connected to a Deco kept working. Even in standby it doesn't lose the IP. My work PC that was to first to connect during the day, and normally stays on the whole it didn't experience issues, but sometimes the first I thing I would have to do in the morning was to disconnect the Main Deco from the power for things to work. Because since it's impossible to have local access to the DECO network in the P9s, only via the app and the TP-Link cloud, which is unreachable when the network reaches this stage.

The clients that were having problems were laptops that would turn on and off during the day. Sometimes they would work, sometimes not. Given that sometimes I would have to restart the network in the morning to get internet, maybe my work PC was also being affected, because I turn it off during the night. I never checked the IP situation with it at the time.

The other two devices that suffered the issue, the Smart TV and Xbox, experienced the issue during the day, while my PC was working fine.

So, someone needs to fix that not so Smart DHCP feature, or at least give the option to disable it and go for regular dynamic IP. That and te ability to perform local management are must haves before I consider trying the P9s again, or else I'll stick the old traditional non-mesh Powerlines. Those work well. Better than the Devolos I tried. Those would cause freezes in the setup-box, even though the powerline speed seemed better than the TP-Link ones.

In your case, is it possible to set up your DSL modem in the bridge mode, and then set up the Deco P9 works in the Router mode? Then you can check if the Deco network will work properly.

We will forward the inquiry to disable smart DHCP and configure a static IP address on the Deco when works in the AP mode to the product team, thus they can evaluate to add this feature or not, and if there is any update, we will update to the official website.