I have 2 VR300's one is ex office and have brought it home to extend the network coverage as an access point. So far

1) Done a factory reset on the AP unit

6) Router cable connection lights up green when cable plugged in

8) AP wifi connections are visible and can be connected to.

What have I missed??

Here's the guide for setting VR300 in AP mode.

According to your steps there's nothing missed.

After rebooting the VR300 AP and connecting it to the main VR300 (LAN=>LAN) you should be fine.

@terziyski just one question remains, the configuration is now up and running with the two VR300 connected by long ethernet cable and 4 wifi nodes configured. WHich all appears to be working. But!!! the remote VR300 (without ADSL connection) just has an orange flashing lamp on it no green lights etc indicating LAN connections or wifi connections. Is this correct?

I believe that the extended VR300 should have the following LEDs active: 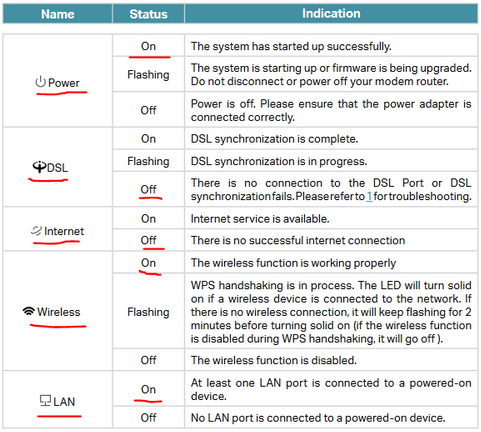 Since your DSL port is not connected in this scenario, you should have Internet and DSL LEDs off.

Since the main VR300 is connected to its LAN port you should have its LAN LED on.

Wireless LED should be on as well, given its wireless radio is enabled and active.

Of course Power LED should be on as well when the extended VR300 is powered on.

A good connectivity test would be to connect a device to the extended VR300 ethernet port and test its Internet connectivity.

Connecting a wireless client to the extended VR300 wireless SSIDs and test the Internet connectivity would be a good test too.

@terziyski this is a VR300 ver 1.0 the middle light is flashing orange no other lights are lit but it appears to be working fine