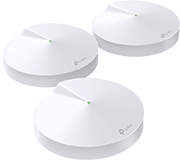 I hope you are not waiting for long.

Notes:
1. Please update your Deco App to the latest version in order to use new features.
2. If there are other Deco models in your Deco network, you may miss some new features till other models release updates in the near future.

Thanks for this update about firmware release. I really appreciate your hard work and dedication to boost up your product.

When I look for updates I get the message that the Wi-Fi system is updated.

This updates is very good updates ,and also good information related to New Firmware Release--Deco M9 Plus V1,Thanks for sharing this good <a href="https://www.irfantechno.com/2020/01/email-id-kaise-banaye-email-id-banane-ka-tarika.html">information</a>.

I HAVE FOUND YOUR WEBSITE BY SEARCHING GOOGLE FOR NEW FIRM WARE REALEASE  DECO M9 PLUS V1. I THINK OUR WEBSITE HAS A SIMILAR THEME SO I HAVE ALREADY ADDED YOUR LINK TO MY WEBSITE.

YOU FIND YOUR LINK HER:kickstaters.in/wp

thank  you ao much, its awsome. I already use it. and my company also use this product, and update also awsome. my company name ; panna electronics . Its electronics shop.

Thanks for this update about firmware release. Default Router Settings - Router Help