I have a KP400 Smart Plug that I purchased in January that is not working.

It was originally setup in January and had been working without issue.  About a month ago I had to change my wifi account so I reset the plug (and the other two Kasa smart devices I have) and reconnected them to my new wifi.

Within a few weeks I noticed on the Kasa Phone App that the plug and its two outlets were shown but not available.  While I was trouble shooting it I would see it become available but as soon as I clicked on it then it would show as not available.  I then noticed on the notifications that it had been raising an Over Tempurature Protection (OTP) error.

Since I was not sure if it was the outlet, the extension cord or the lights that were plugged into the KP400 that might be the problem I unplugged the KP400 and a couple of days later I plugged it into an outlet inside my home with nothing plugged into it.

Overnight between midnight and 5:00 am it raised 6 OTP errors.  Again, this is sitting on a quartz countertop, inside an air conditioned home with nothing plugged into either outlet.

As a follow up.  I did a reset (held a button down for 10+ seconds) and reconfigured the plug.  I was able to connect to it via my phone app and connect it to my wifi.  I was then able to rename one of the plugs.  When I tried to rename the second plug I got an error.  I left it plugged in overnight and now the wifi light is solid red.

Thank you for your detailed post. When the temperature exceeds certain degree (monitored by internal sesor), the plug will turn off automatically and Kasa app will have the OTP or Over Temperature Protection warning.

Here are some suggestions you could try :

1.Try a different socket for KP400 and unplug the light or home appliance from it and see if it prompt the same warning (skip if you have tried)
2.Check if the pin on KP400  is rusty or have impurities adhering to the contact surface.

Can you help confirm some details if the above does not work: 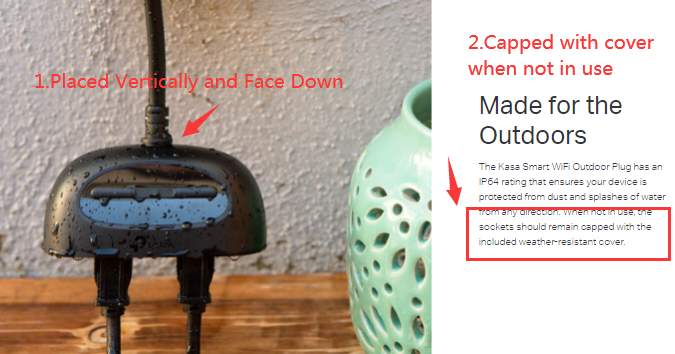