Home network has two Deco X20's with ethernet backhaul.  Modem and master unit are in a hallway closet, ethernet over to a TP Link SG105E in the living room and the slave unit is connected to that switch along with some other devices like a VOIP phone and an XBox. 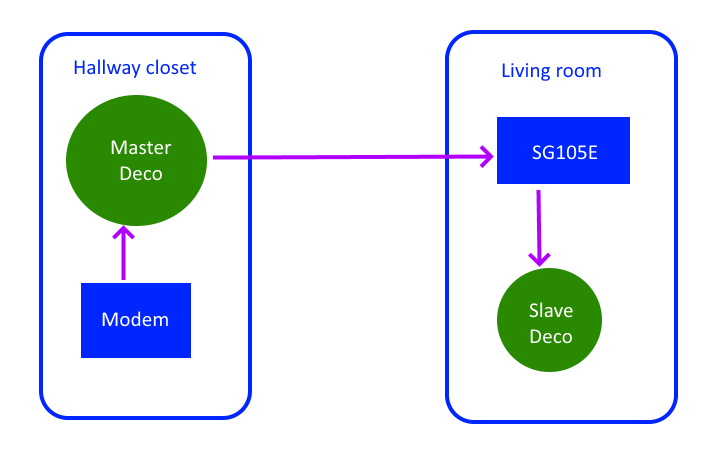 The Decos are failing at least once every day and generally in a little "storm" of repeated failures for anything from 10 minutes to an hour.  Sometimes it is just the slave that fails, sometimes it is the master.  By "failing" I mean the LED changes to red, all the devices connected to them lose their connection.  I have tried disconnecting the slave from the switch to use wireless backhaul, turning off mesh networking for some of the devices that don't move from one location and assigning static IP addresses for some devices (sometimes we were getting warning messages on some of the devices that there was another machine with the same IP address, or security softwark suspected ARP cache poisoning attacks), but the problems have persisted.

Thanks for the information. We will do some troubleshooting to locate this issue and try to figure it out.

1. When the led turns red, is there any error message on the Deco app?

2. Try to switch the slave Deco to the main Deco and take some time to test the stability.

3. When master Deco stops working, please connect your computer to the modem directly and verify whether you can access internet.

4. Besides, how do you recover the network once it crashes?

I am also having the same issue....my X20 keeps rebooting... sometimes it takes turn rebooting (LED from yellow->red->green), it happens every day or every few hours or so..I thought is the latest firmware or the unit is faulty, so I got TP-Link to replace the unit.  I just received the new unit yesterday, didn't upgrade the firmware, but I still have the same problem...