Hi, i would buy the Vr400 but i have some question, i have 50mbps, if i put a device in che low priority tab and i set that tab at 50%, it mean that device can go at 25mbps max? this is how the qos of this router works?

You might be interested in trying the device emulator first, its avaiable at the link below and will allow you to test the settings.

In answer to your question, yes and no.  what you are referring to is "Bandwidth Control" where you can set devices a limit on the connection (25mbps), QOS is a bit different.   QOS doesnt look to limit a device speed, rather just maintain a fair service for all devices as per instructions.

The line can be devided into Low, Med and High Priority and when QOS is active it will limit how much traffic each priority is allowed..    Take LOW for example, its set at 10% so if the line was completely maxed then we know 10% of the traffic going in and out is from the devices in LOW.

However if the line is fairly empty / unused then LOW traffic will be able to flow un-stopped at 50mbps until the line become busy, or a higher priority device wants access.   Once a Medium or High device asks for access, LOW will start getting queued again.  This isnt a speed restriction, rather a time restriction.   However it will feel slower so does appear to users as a speed restriction.

Think of it like budget seats on a plane, you get there at the same speed as the First Class passengers.  But you will have to queue longer to board / exit in the first place.  If you are the only one on the plane it no longer matters what class you are!

Bandwidth control is more of a Business Grade service that requires Omada hardware and VLANs setup, likely not something you will see on the home grade router.   Had a quick look and none of the home devices have bandwidth controls.

However it is likely that QOS would work ok for what you are trying to achieve.   Take Netflix for example, the increase in wait times would likely mean the video pre-buffer doesn't fill as quick and therefore has the same effect overall.   Never tested it but should help keep things under control for you

Just bear in mind that LAG in gaming specifically will increase with any implementation of QOS, even on highest priority its going to drop / block 4 out of every 10 data packets, that means retries and that means LAG.

Try setting the 3x levels as below for yourself.   Alexa and IOT devices are a good one to set really low, they upload a surprising volume of traffic and upload maxing can have a bigger effect on LAG / Ping than downloads (from experience)

Best of luck to you!

@Philbert there are these three tabs 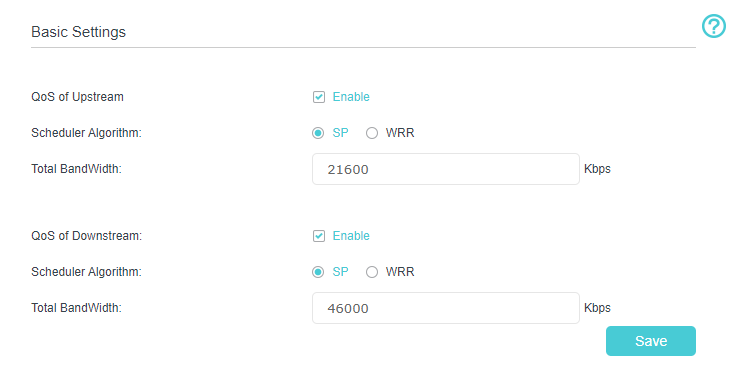 Ok first ive seen this in TP link but it might be the answer to your issue, looks like you have a better more detailed QOS on that device.  Im actually impressed!

You now have 2x options, SP or WRR mode

SP is Strict Priority - Lets say you are watching youtube and you have it set at priority 2, someone wants to game its priority 3 (higher) then your traffic is STOPPED until the higher priority is done, at which stage you can send again.    Basically Traffic Lights mode..   This will reduce LAG on gaming (if high priority), but at expense of everything else

WRR is Weighted Round Robin  -  More like what i described before, everyone get a time slot to send the data.  But not all time slots are the same (the percentage sliders), this is called Weighting as opposed to percentages, but the same thing really.   Higher weighting is higher priority will get more access to the WAN.

Choose whatever mode you think is best for you.    If LAG is you end goal, go SP.   If you want a more fair overall service go WRR

Ok so once that is decided and you set your upstream / downstream, (see below) start adding the services / ports / devices etc and give them a weight (priority level) as you feel appropriate

The   ?   help button should give you more info on how to fill this in!

Generally anything not on the list will get the lowest weighting automatically.    Set your gaming as highest weighting (100) and surfing as say 50, IOT / Alexa as 10    - yes it doesnt have to add to 100, its not a percentage as such.. more a ranking / weighting

Direction will likely be BOTH

Hopefully that will help you set this up!

I find out that if i put the local ip of a device here and "committed rate at for exammple 10000, that device can only achieve 10mbps. what i need to put in "committed burst size"?

edit: correction, a sort of this, because if i set that every device on the network goes max at 1000 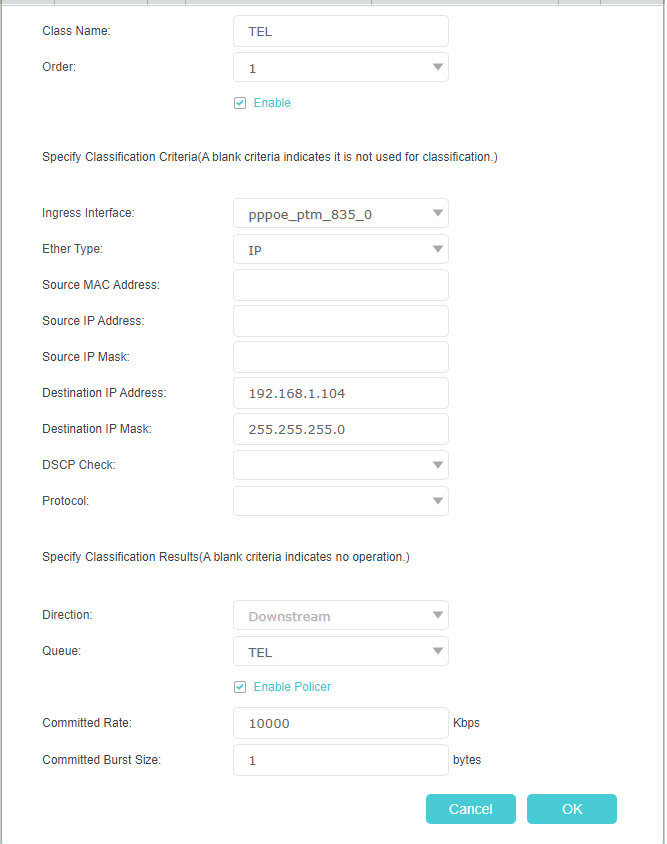