Wi-Fi 6E is around the corner, are you ready for it? What’s Wi-Fi 6E? We are here listing some frequently asked questions that you may be interested in, let me know if you want to know more.

What you'd better know before you buy a Wi-Fi 6E router? Visit this.

Deco XE75 will be the first Wi-Fi 6E model of the Deco series, and you can visit here to get more models in the future.

Deco XE75 works on the U-NII-5 band and will select the best channel automatically.

Q3. How does the 6GHz band operate on the Deco XE75 Mesh product?

6GHz network acts as a dedicated backhaul by default, which means, by default, the 6GHz band is only used for data transfer between Deco units.

If you want to connect your Wi-Fi 6E supported phones/laptops to the 6GHz radio of the Deco network, you could enable the 6GHz Wi-Fi in the Deco app. For detailed steps, please refer to

Yes, all Deco models should be able to work together as one network.

However, you wouldn’t be able to use the 6GHz backhaul when Deco XE75 is used with another old Deco model which has no Wi-Fi 6E capability. You can still enable the 6GHz network for clients to connect, the specific setting can be found in the Deco app, make sure your Deco app is up to date.

Yes, Wi-Fi 6E Deco products have 2.4GHz and 5GHz wireless radio as well. Your old phones and laptops can still connect to the traditional 2.4GHz or 5GHz band.
However, those phones and laptops are not able to use the 6GHz radio of Wi-Fi 6E Deco products because they do not support 6GHz Wi-Fi.
Client devices manufactured before 2020 is not likely to support 6GHz Wi-Fi. Current known 6GHz-capable devices are Intel NIC AX201 and a few versions of the Samsung S21 series.

Q6. When using Wi-Fi 6E capable Mesh devices, will my cellphone be able to automatically switch between the 5GHz and 6GHz networks?

It highly depends on the cellphone itself, Deco XE75 currently won’t suggest a client switch from one frequency to another. However, the client itself might choose to connect to the 5GHz at a certain point, when the 6GHz signal becomes weak enough. Just like switching to a 2.4GHz network when 5GHz doesn’t have enough signal strength.

Moreover, as long as the client supports 802.11k/v roaming protocols, it should be able to automatically switch between different Deco units, at 6GHz, the process would be seamless.

When the Deco XE75 is utilized in conjunction with an older Deco model that does not support Wi-Fi 6E, you will not be able to take use of the 6GHz backhaul.

@TP-Link when will the XE75 be released in the UK?

Nice to see you again. Currently, Deco XE75 hasn’t been for sale yet and it is suggested you keep attention to the local website.

1) When 6GHz is used for client,  then how is Deco units backhaul connected in wireless environment?

2) If backhual between Deco units are Wired connected , then what happens to 6Ghz wireless backhaul ?

Hi, welcome to the community.

Supposing you have two Deco XE75s,

1) If such is the case for 6GHz (client +hidden  backhual) then why is the option in app. to make 6Ghz as client band ?

2)by default the device backhaul is wireless 6Ghz. full band or half band ?

3)will the Full 6GHz available for client if on wired backhaul , (as wired is preferred over wireless)

@mkd24 Sorry for the delay.

When I checked the settings on the APP, I see a little difference from the FAQ:

And this is the settings on the APP: 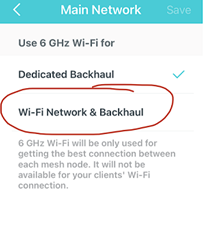 Even Deco X75 is on wired backhaul, the 6Ghz is still available to clients.

As for the 6Ghz backhaul, it is always here whether it is used or not and I think this link might provide more details:

in wired backhaul between XE75 Deco Units, below suituation arise:

is above true ?.. in both cases the 6Ghz is wasted (not used ) in backhaul, as wired is prefered.

Hi, here is what I have learnt from my Deco M9 plus, though it might not be as fancy as your Deco XE75.

I did not quite understand what do you mean, "half band or full band". I normally consider the hidden backhaul and visible wireless radio for mobile clients separate wireless network. Since Deco X75 is still Deco family and I believe it is the same.

Wired backhaul and wireless backhaul will not be used at the same time. I did not mean the 6ghz is not broadcasting anymore. It is still there not matter used for backhaul or client devices. Since when my Deco M9 is wired to the switch, the signal source only shows "Ethernet" from another Deco and my smartphone is still connected to the Wi-Fi. As for the backhaul, I suppose it is still there but I did not test it always. Sometimes, when I restart my Deco, I see it is on 2.4ghz/5ghz backhaul for the first few minutes then it finally switches to Ethernet backhaul and stays on Ethernet backhaul.

So for question, my answer would be:

a) wired backhaul and dedicated 6Ghz backhaul --No

I would say the dedicated 6ghz is more like a backup backhaul when Deco XE75 is wired to each other. It is always there but only works when the cable breaks.