Using the Tether Android app, I've edited the names of all of my connected WiFi clients to better reflect who is who. Before I did that, our cell phones (a Pixel 2 and Pixel 2 XL) were showing up just as an asterisk (*) in the device list, and I really wanted to know, who was who so that I could start using the IFTTT recipes to trigger when my wife or I came & went. However, it doesn't apper that the device names carry over to IFTTT, and I have no way of knowing which device is which. 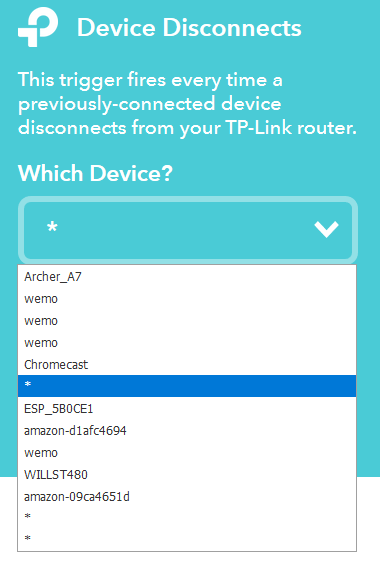 Anyone have a tip on how I can get around this issue? As it currently stands, I see 3 options paths, but there are likely more that I haven't thought up yet.

This is something we would need to dicuss with our development team to get you a complete answer.  Before we do that I'd like you to try 1 or 2 things, if you havent already.  1st power cycle your router and then see if the IFTTT receipe is properly showing the name.   If this works it could simply be that the name did not update after you changed them in the Tether app.  The 2nd thing would be only if this step does not work and that would be to remove the IFTTT reciepe and re-add it.

If you have to do this 2nd step regardless if it works or not let me know so i can take this information over to the developers and see what can be done.

Hi Carl - After power cycling the router & re-linking the TP Link service in IFTTT, i'm still seeing the base device names without my "friendly" names;

Hmmm, I think would need to engage the software engineers on this then.  What i would like is for you to send an email to ussupportteam@tp-link.com with your contact details.  Please include a link to this thread so we can share that information with our software team.  Also this way your don't have to share personal data on a public forum.