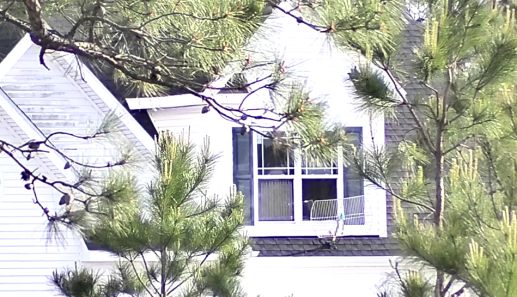 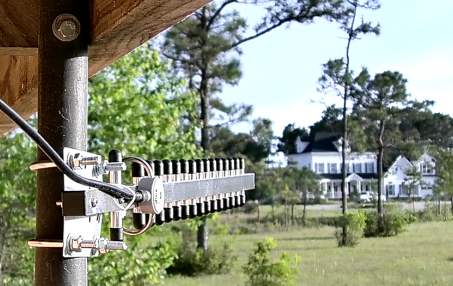 I also noted that the MAC filtering could only be done on the Access Point.  Previously I had WiFi cameras operating which I had MAC filtering on both Access point, and Client (Camera)  I feel better about doing it that way as congestion in my area is pretty high.  The main channels 1,6 & 11 all have several WiFi signals on them.  I have bandwidth set for 20MHz to help with adjacent signals.  However at times it seems my IP surveillance cameras stop updating.  I can see the seconds tick off on the clock except occasionally.  Don't know if it's a Camera issue or a path issue.

Did the microwave path analysis and my field tests bare out the calculations within acceptable tollerances.  I'm getting -63 to -71 signals depending on time of day and wind blowing the pine trees around.  Fresnel Zone goes over a pond at mid point... which is likely part of my fade margin.

The question IS... does the MAC filtering help the readout of Antenna Alignment, or does sheer signal strength on channel affect the display.

The other homes that are on my channel are within the horizontal beamwidth of the Yagi.  A dish would be narrower, but more wind resistance and cost.  The mini dish's are smaller, but beamwidth specs are not available.

Anyone have the answer...

Telecommunication Engineer with years of experience in Microwave and Radio communications

Tha MAC address filtering will not affect the strength or reliability of your connection.

Given how the area has interference, it probably would be best to go for CPE510s which work off of the 5Ghz band so you should not have to deal with the interference your getting working off of the 2.4GHz.

Here is a FAQ that we have which talks about set ups with our CPEs: https://www.tp-link.com/us/support/faq/1226/

One thing to note is that CPE devices are business products in which case you can get additional help from our SMB forums which are located here: https://community.tp-link.com/en/business

To restate my question:

does the display simply show a composit of EVERY signal on the spefied channel.

Reason being that my display strength is sometimes greater when I have most difficulty with interference.

Being an RF engineer I understand that changing polarization will result in a 20dB reduction in cross polarized signals.

I could easily change from vertical polarization to horizontal and get a 20dB reduction in competing signal interference with no additional cost.

Changing polarization will be my next step as there is no reason to believe that surrounding WiFi signals are dual polarization.  Generally either one or the other with preference being VERTICAL.

A little searching provided the answer on mod.  QPSK does not exhibit the capture effect seen in FM modulated signals.

I am pursuing the polarization change to horizontal.  I'll run a test on the client end first... and if the "background signals" all take a 20dB hit... I'll know my idea will work.  Most of the interference is 12 to 18dB below the desired signal from my grid dish antenna.

The little yagi beamwidth is pretty broad, which means the advertised gain is also likely more like 12dBi than 18dBi.  The conversion between dBi and dB being -2.71dB.  Isotrophic readings sell more product because the uninitiated believe they will get ALL THIS GAIN.  It's a measurement used throughout industry.  Isotrophic is a point source type measurement where the Inverse Square Law prevails.  Each time you double the distance... you loose 75% of your previous signal level.

Neither strength nor reliability was an issue... just wondered if the MAC filtering kept other than approved signals from being measured.  I see you avoiding the question by changing the subject... you must be a politician.

I've already invested a fair amount of time installing the 2.4GHz system.  Should I be able to make it function I'll be ahead, and not holding extra equipment which would be worthless.  I believe part of my momentary display lock up is related to camera viewing software.  So as the Onion is peeled, new layers of problems are either discovered or cured.

I do have some Cisco 802.11a equipment that could be pressed into service.  However that is my last ditch...

I have found that TP-Link may be pretty good hardware but their support staff knows less than I do about it's capabiliites and features.  Was hoping to find someone with EXPERIENCE.

The answer provided to you was not skirting around the question but rather giving you an answer we could provide.  The reason we suggested the CPE510 is because we are not familar with the antennas you are using and as we make a point to point device designed to transmit a signal from one location to another over greater distances we wanted to let you know what we had to offer to accomidate your design.

Mac filtering is only on the link layer so no relation to modulation or the radio.  Tony's response was correct in this regard as it was stated that it will not affect the stregnth or reliablity of the connection.

As for the modulation scheme we use.  OFDM has been used by us since 802.11g.