With regard to OneMesh, is there a timeline on when one can use Ethernet backhaul between the terminals?

I bought a AX90 and then realised that using an Ethernet backhaul isn't an option.... like others in the forum in hindsight I prob would not have bought it had I known that this was a liimitation on the OneMesh system.

There are currently no mentions of making OneMesh functions with an Ethernet cable.

Currently, our Deco mesh system is able to function via Ethernet backhaul.

I just bought an Archer AX6000 and an RE605x and I'm very disappointed that I can't use a wired repeater with OneMesh.

@Tony I bought the RE505X extender thinking that LAN meshing was possible, I'm going to return it since I literally have no use for it without that functionallity, I have both an Archer C7 and an Archer AX6000, I first bought the AX6000 but found that one part of my house had some issues with the signal. I prevously had Asus routers that allowed meshing with each other, so I bought an Archer C7 because it said that it was one mesh compatible, I tought that tp-link was on par but I was mistaken. Then I bought the RE505X thinking that it might solve my problem but then again I was mistaken, I sincerely don't understand how their product for range extension doesn't have this functionallity. I'm just going to recommend Asus from now on for people that want flexible meshing, It sucks since my AX6000 had been working great.

TLDR: Buy Asus if you want LAN meshing with your big router.

The RE505X does support OneMesh as does the Archer AX6000 but OneMesh only allows one Router in the network so the extensions have to be compatible Range Extenders or Powerline adapters.  With Extenders the backhaul is only wireless.  We have requested ethernet but at this time that is not available.  We do have the TL-WPA8631P Kit that is OneMesh compatible and as a PLC would use the homes powerlines instead of transmitting via wireless.

We do have the TL-WPA8631P Kit that is OneMesh compatible and as a PLC would use the homes powerlines instead of transmitting via wireless.

Since the initial release of OneMesh, it's been constantly stated that wired ethernet backhaul is not supported and constantly requested that this support be added.  The lack of any forthcoming support or even promise of support raises suspicion that tp-link is deliberately withholding this functionality from its OneMesh line in favor of promoting its Deco line instead.

So with that said, I'm going to take a HUGE risk and share the news that OneMesh currently does have limited support for wired ethernet backhaul.  Hopefully, sharing this information helps to benefit existing users of OneMesh capable routers while also further promoting OneMesh adoption and encouraging TP Link to nurture rather than cripple OneMesh support.  There's a danger that by disclosing this, TP Link may remove this functionality in the future.  But I think such a move would be a PR cataclysm.  Let's hope this functionality is never removed...  so without further adieu....

The answer is found within the TL-WPA8631P powerline adapter mentioned above.  I currently have an AX73/AX5400 router set up with two of these adapters (for two nodes) in a OneMesh configuration without wireless backhaul or powerline connectivity.  The key thing to note on these adapters is that all three ethernet LAN ports and the "powerline LAN port" logically bind to the same vlan/eth0 interface via the built-in switch.  Therefore, traffic arriving through the powerline connection is received through the same interface as traffic arriving through the RJ45 ethernet ports (and vice versa).  This means that no powerline network needs to be actually utilized between these adapters and the main OneMesh router.  The backhaul connection still works if you completely remove the secondary powerline adapter (TL-PA8010P) and run ethernet directly from your router to one of the TL-WPA8631P ethernet ports.  To clarify the significance of this further, this allows the backhaul connection to achieve true ethernet (e.g. gigabit) speeds rather than the comparably abysmal rates typically achieved over powerlines.  Likewise, the connection stability is rock solid and not prone to EM/RF powerline interference.  This approach may work with the other lines of OneMesh capable powerline adapters, but I have only confirmed firsthand with the TL-WPA8631P.

Unfortunately, there are still some drawbacks to this approach.  Firstly, the powerline adapters are currently only Wifi 5 / AC capable.  Therefore there is no Wifi 6 / AX capable wired ethernet backhaul available for OneMesh. However, I'm able to get excellent transfer rates over Wifi 5, so this is a tradeoff I'll willingly make in exchange for wired backhaul.  Also, the adapters I received only supported WPA2 out of the box.  In order for 802.11k/802.11v roaming to function, all nodes in the wifi mesh must have the same security configuration.  So WPA3 was not supported out of hte box.  However, a very recent firmware update for Tl-WPA8631P actually added WPA3 support, so that is no longer an issue for anyone willing to update the powerline adapter firmware.  I've confirmed WPA3 works in when enabled on all three of my devices (AX73 router and both powerline adapters).

For reference, below are screenshots from my device web interfaces.  Of particular note is the powerline adapter powerline network configuration showing no actual powerline network present.  The adapter is connected directly to my router via regular ethernet cable. 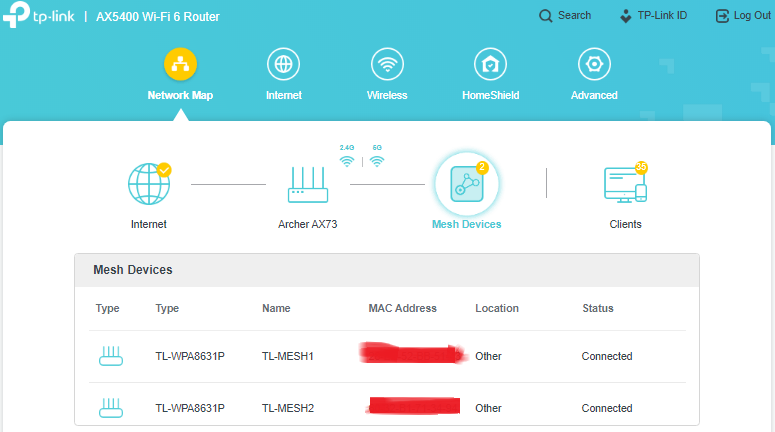 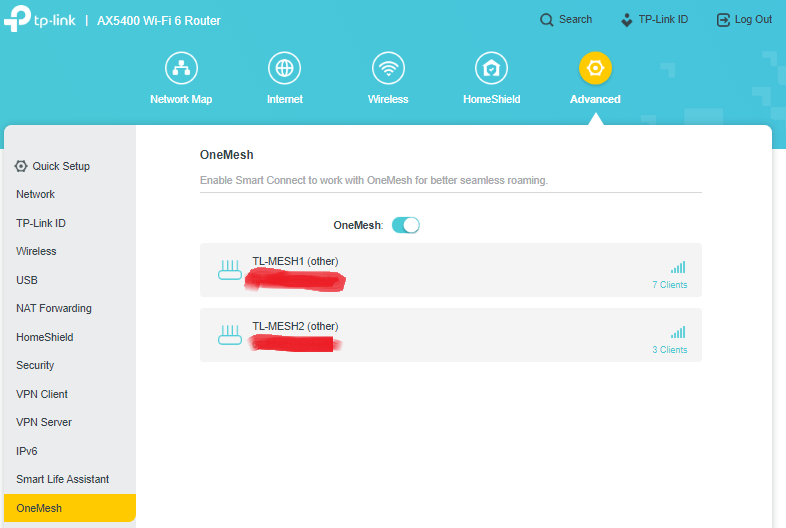 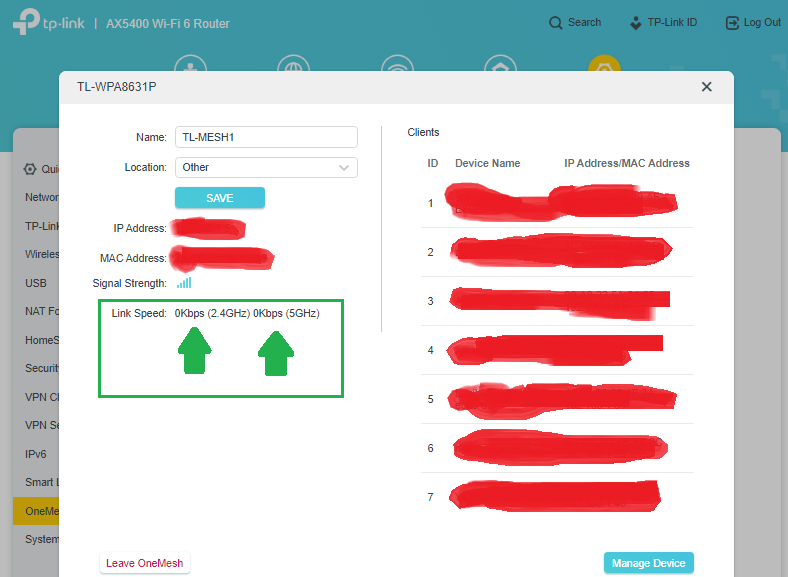 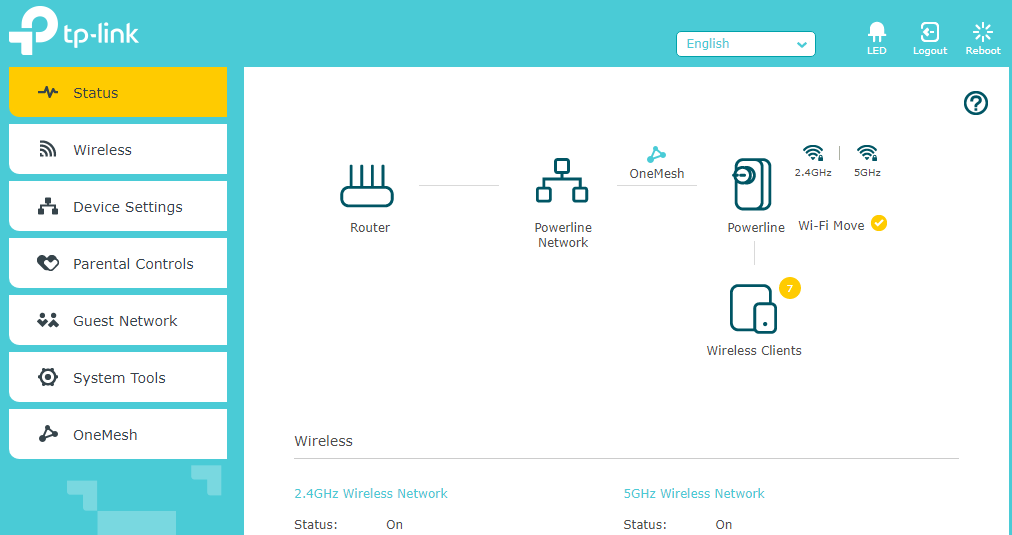 Powerline Network Details (No other adapters in network confirming no powerline connection is active or present) -- backhaul is achieved via ethernet:

The TL-WPA8631P Kit is different.  It is the first model of PLC, which was always on the roadmap that is capable of OneMesh and can techincally be considered an Ethernet/hybrid backhaul.  This is because while the wireless unit can link to OneMesh, it still transmits its data through the home's powerlines to the "base" unit which is connected to the rotuer via ethernet.  The tech behind this is similar to our Deco "Px" models that feature Powerline backhaul as an option.  While it is not exactly the same as a true ethernet backhaul it is similar and advoids a lot of the concerns that might come from a wireless backhaul.  But it should be worth mentioning that Powerline does have concerns of its own.

These concerns include interference from major applianced, which can be reduced by pluging these into surge protectors to filter their noise.  Load on the power lines, the quality or age of the powerlines, any potential damage in the powerline's insulation, and distance.  While this doesn't seem to be a factor for you, it is worth mentioning to others who read this.

Also we will be expanding the PLC offering for our OneMesh products in the future so keep an out for those.

I appreciate your post but it's somewhat clear that you didn't pay close attention to what I tried to convey.  I'm perfectly aware of how powerline networks operate and how TP Link intended users to use the TL-WPA8631P adapters.

In other words, these adapters allow owners of OneMesh routers to expand their networks with OneMesh nodes operating over wired ethernet backhaul, not via wireless backhaul nor via powerline backhaul.  The concerns you mentioned regarding Powerline interference and quality of home wiring are irrelevant because the configuration I've outlined *DOES NOT USE POWERLINE NETWORKING*.  Instead, my adapters are connected to the router only via cat 5e/cat 6 ethernet cable.  This works because the adapter does not distinguish between the powerline and ethernet connections.  (In another one of your posts, you explain to other users that powerline connections can be viewed as "glorified ethernet cable" in that the devices at their end points cannot distinguish any difference.  The same principle applies here.)

To be extra clear, I am not suggesting for users to install TL-WPA8631P adapters in their traditional manner.  Instead, I'm informing users that the TL-WPA8631P adapters will work in an alternate configuration which outperforms the standard configuration (by simply excluding the powerline components from the network and replacing them with direct ethernet).  I don't know how else to make this any clearer.

The bottom line is that this modified/alternate configuration works flawlessly for creating a OneMesh network with wired ethernet backhaul by simply ignoring the powerline features of the TL-WPA8631P adapters.  In the last screenshot in my post above, I demonstrate that there are no other powerline adapters present in my powerline "network" therefore there is no powerline connection to "transmit data through the home's powerlines to the base unit which is connected to the router via ethernet" as you suggested in your reply.  All communication between the TL-WPA8631P adapters and the router are via wired ethernet only.

The screenshots below were taken from an android phone connected to one of the TL-WPA8631P adapters in my mesh network with split screen speed test and WiFiman.  The transfer rates over 5GHz wifi show speeds that would never be possible via a powerline backhaul.  These are only achieved because my adapters are connected via (1000Mb full duplex) ethernet backhaul.  The wifiman app clearly shows the 3 nodes in my mesh network and the active link assigned to one of the TL-WPA8631P nodes ("TL-MESH2").  Also note that these speeds are at a casual distance from the OneMesh nodes.  Higher transfer rates occur if I place my devices in close proximity.

screenshot 1:  showing speed test over wireless connection to one of the TL-WPA8631P adapters configured in a three node OneMesh network