OK, I've got an ODD problem, and it could be router connected.

In a nutshell, I lose NetBios connection (I think) to the router sometime after I boot the PC. Rebooting the router 'reconnects' them and NET VIEW again works.

Don't know when this has started, but it is annoying.

Only 2 PC's on the network LAN and a Printer (wireless) at this time.

Just booted right now and it does work:

I've started the other computer and it still works:

Sometime during the day it will not and I get an ERROR 53. NET VIEW on other PC still works fine?

I've searched the web for the error 53 and none of the pages help or address this?

As far as I can tell, it started around the time of the 2h20 update? I am focusing on my PC alone, not the other one. I think it never has a problem. My PC is running the HOME version, the other PRO.

I've done the NBTSTAT -RR as well. Only the ROUTER reboot or this PC reboot fixes it it seems? Since this is a wireless PC I even switched SSID's and it doesn't help?

Right now, since it is working, I can use the NetBios names:

This what I see now using Explorer:

I have no control how the Router (TP-SHARE) or the HP printer is discovered. Both PC's are using WSD in Windows as well as NetBios SMB 1 is enabled.
I waited a few hours, and it has now failed, get the error using NET VIEW.
Never had a problem before, and it is 'back' now...

All the shares have no blanks or special characters. Besides, why would it work and then someone not work later?

Really odd, my PC knows where tp-share is but I can't 'net view' to it, but I can PING it with the share name of the router?

Of course, once I reboot the router it will work again.

No, nothing changed on the router (TP-LINK Archer A20), same f/w and no changes anywhere made for a long time.

I can even net view to the other PC using the share name:

Makes no sense to me? It can resolve NetBios names, but it seems only NET VIEW has a problem? Suspect somehow the Router to PC NetBios connection has been lost? However I can access the Router's GUI fine?

Usually, this is seen on accessing NAS storage files.

Have you tried accessing the router files with FTP?

Even though your computer is able to see the other computer shares it doesn't seem like the computer can't see anything which is odd.

Have you tried the potential fixes such as:

-Disabling IPV6 for your network card? (ignore if you are using IPv6)

-Checking the firewall settings if the computer has any such as McAfee or Norton?

Do you happen to have another router to see if the issue still happens?

" Usually, this is seen on accessing NAS storage files."

Although I do have a USB drive on the 3.0 port, I'm not accessing normally. Used basically as a Media Server and an occasional transfer of some files from a PC to it. Possible when I open Explorer it could do that, but when I open up 'Network' it clearly is the only time it tries to access the router? Doesn't explain why a REBOOT of the router fixes it either? USB drive has been on the Router since Day one over a year ago with this not happening until recently?

" Have you tried accessing the router files with FTP? "

No, but my iPad using a DLNA client has no problem accessing the USB drive.

Have you tried the potential fixes such as:

-Disabling IPV6 for your network card? (ignore if you are using IPv6)

-Checking the firewall settings if the computer has any such as McAfee or Norton?"

Yes, IPv6 is enabled and has been for quite awhile. Doesn't explain why it is working and then isn't?

Matter of fact, it is working now,

Has been working fine since I rebooted the A20 just before Noon EST today: 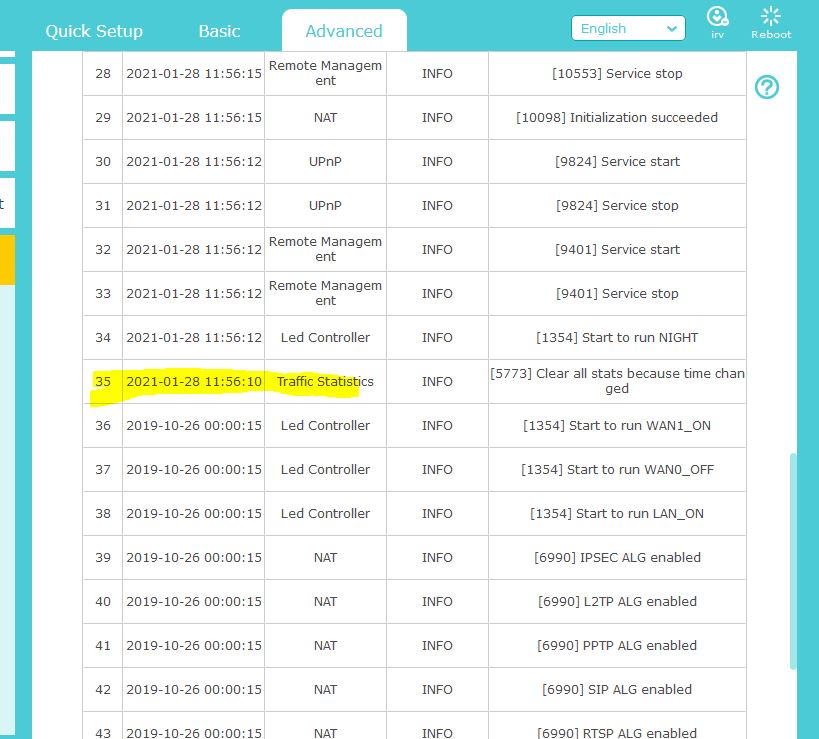 If a Firewall or even a Security suite was the problem, wouldn't it always be a problem?

" Do you happen to have another router to see if the issue still happens? "

I am really stumped here, never heard of this, an Google searches turn up nothing about it being intermittant.

I've already ruled out the Network drivers and I've used both wire and wireless with the same problem. Problem exists on 2 PC's we have (only 2 we have), and one is a Home edition, the other Pro.

Right now it is difficult to really narrow down where it might be coming from.

I would probably try various things as it may work, but more or less one less thing to exclude.

If you do have the other router, that would help so the focus can be on the A20.

I'll switch routers later, but it was ROCK SOLID yesterday after rebooting.

My 'logic' I'm working under is 'something' changed recently. I've never known a router cause something like this either. Google searches get no hits. So it had to be unique to out h/w and usage.

Usually I'm the first up and powering up my PC. Wife's powered up after mine. Since this happened a month or two ago, I've been checking daily first thing after powering up running NET VIEW. Always works, randomly I'd check later and at some point it fails.

I'll usually notice the fail when I have to get or put something on her computer. I'll use Windows Explorer and open NETWORK. When NET VIEW has failed, I might only see her PC under NETWORK or just our 2 PC's. Router and Printer do not appear.

Just can't understand how this 'breaks'? Her PC, my PC, router? Has to be one or some combo. A combo would be an operation, but that is very rarely using the USB drive on the router?

I have NO PROBLEMS now, I can use Explorer to look at her PC and read files at this time and NET VIEW still works?

I did make 2 PC changes, and one I'm sure wasn't needed.

Since making those changes and rebooting the router I've NOT seen the problem?

After today, and I'll be checking often, if there is no problem, I'll uncheck SMB 1 Server on each PC and test the next day. I'm hoping that one feature was the cause. If not, I'll put back my garbage Netgear R8000 and test. Right now, I'm not sure it is the router at all.

Looks like the changes I made have made a difference.

Although this is old, https://www.reddit.com/r/sysadmin/comments/8lwgne/smb_direct_windows_10_1803_affecting_printers_and/?ref_source=embed&ref=share, the link has basically the same problem and pointed a finger at SMB Direct being enabled?

I do NOT recall seeing that enabled before though?

I suspect that was the culprit here. Certainly not the router. Have no clue why rebooting the router fixed it, unless it forced everyone to reconnect. First use of the router via a GUI probably broke SMB 1 connections I assume.

I might test in a day or two turning it back on to verify.

Well, problem back, seems as long as my wife's PC is the First to turn-on (the PRO PC) I have the problem now. With SMB Direct feature on on that PC, the problem exists all the time.

Something about that PC and NetBios support is probably the cause I'll assume?

I'll have to live with this if it is, until MS fixes it, but I can't find any other reports like this on the web?

Doubt it is the router, but I'll probably swap it out later when I'm ready to attack this problem more. Almost resigned to this is what it is now.

Well, it is back unfortunately.

As far as I can tell, at least now without any way I can think of further debugging this, is that the Router is the common component that when rebooted the problem goes away immediately and possibly over a few days? This morning my wife's PC W10 Pro was booted first, mine later, and we both get the fail:

It does take time for all devices (wife's PC and Printer) to appear. They did by the time I put the above in:

This IS NOT a new router, 16 months only, no new f/w either? Could the router be running out of RAM/Resources? All of a sudden?

I'll see what I can find for you given the information you provided.

@IrvSp Thanks for the detailed reply.  What I observe is similar to what you observe when your router becomes ill.

Summary of my observations:

Related Articles
WiFi only works within a few feet of the router
1380 0
Tp-Link Touch P5 Router ONLY works when connected to another router
845 0
New TP Link router works wirelessly but not wired
165 0
TP-Link AC1750 - Internet works, but can't access router 192.168.0.1
3572 0
Password works on iPad but not iPhone
243 0
How Can i Control the Bandwidth?? Or only QoS works?
445 0
Report Inappropriate Content
Transfer Module
New message