I'm trying to wire the bottom and top of a stairwell light. 3-way conventional flicker switches were installed.

I am not getting a light on the front of the switch though. I think I have the correct wiring... could it be that I mixed up my line and load?? The line is coming from the non-3 way wire (I believe from the breaker) and the load coming from the light.

I also wired the bottom switch the same and couldnt get anything as well... How do i ensure the 3-way switches received are functional?

@Ferinthul Do you have pictures of the switch and box before and after?

I also wired the bottom switch the same and couldnt get anything as well... How do i ensure the 3-way switches received are functional?

In a three-way wiring config, you have 5 relevant wires total in the box (not including duplicates for neutral and ground)

In the box with the Line Supply from breaker

Then the Neutral (Four) and Ground (Five) which will be paired together from each Romex cable and also connected to the switch.

It's essentially the same at the 'Load' end switch, except the 2-conductor (plus Ground) Romex goes to the Load (the light)

So in the incoming Line Box, there is no 'load' per se, there are a pair of output travelers which run to the 'other' (load end) switch.

So when you say you have a Line Wire and a Load Wire in that first box that is not going to be the case - there is no actual load wire (from the light) that will be in that box.

Now - some older homes have no neutral in the box - in which case they often use a white wire as one of the travelers. So it's possible you may be mistaking a white wire for Neutral, when it's really a Traveler.

That would mean you could not use the HS210 as it MUST have a Neutral wire connection to function.

There is a really simple way to tell if your white wire is indeed a 'real' Neutral, or if has been used as a Traveler - was it originally connected to the original dumb switch? If it WAS it is NOT a Neutral. (Neutral wires are NEVER connected to Dumb Switches)

However if it is just tied to the outgoing Traveler Romex Neutral inside the box with a wire nut, then yes, that WOULD be a Neutral.

But if latter is the case you should have three more wires (not incl ground) that would be the Line plus Two Traveler wires (you only mentioned line and load, which sounds like two)

It would be helpful if you can show an image of your box with the switch not screwed in place so we can clearly see what you have.

Also, not sure if too late, but always good idea to take an image of what you started with regarding connections on the original dumb switch, so you have that as a reference

(or at least you sketched a drawing showing how it was)

Thanks for your replies. I thought i had some pictures from the original wiring... but i guess i didnt take them

Here are some pictures of the two-gang box at the bottom of the stairs (i've already managed to hook up a two-way switch successfully).

To describe the box, i have two feeds coming from the bottom, each include:

From the top I had also two wires, the first one had:

The second wire (on the right, this is the one I believe is the 3-way) had:

So I connected the lower wire's black to the line of the switch, and the black and red from the top wire to the traveller, ground to ground and the neutrals to the neutral.

At the top of the stairs, there's a single gang box for the switch with two wires coming into it, the top wire has:

(I believe this wire to be from the breaker panel)

The bottom wire has:

The light for the 3-way wasn't turning on with the bottom switch replaced, so i swapped the travellers and tried again... nothing. I checked to see if the neutral was hot and it was.

My house was constructed sometime in the late 80's, and there are neutrals present.

I've called a buddy and he said to cap the line wire from the top gang box and connect a traveller to the load part of the 3-way switch... I tried and nothing either.

A sketch of what the double and single gang box looks like.

@Ferinthul OK, that is helpful - you definitely have a Neutral System incorporated so that is a positive.

The Romex that contains the Black/Red/White/Ground - is the Traveler Romex - as an idividual entity it goes from one box to the other, nowhere else as far as line or load is concered

So then you have a Black/White/Romex in each box - in one of these boxes, it is the Cable from the Breaker Box (the Line wire); in the other box, it is the Load Wire (to the light fixture)

The important factor is to find out WHICH box is which - location at top or bottom is not necessarily an idicator or which.

Do you have a Voltage Tester? (whether a meter or a non-contact type)

If you don't, look up non contact voltage tester at HD or Lowes or Amazon - goot tool to have!

What you need to do is turn breaker off and disconnect the black wire from the black/white romex) from both devices.

Once you establish that, this box is the ONE where you need to install the HS210 (the load one only needs the original 'dumb' switch - a second HS210 is NOT necessary)

It does not matter which traveler wire (black or red) goes to which travleler terminal - the line wire goes to the common and the neutral and ground accordingly.

At the dumb switch end (load end) the incoming red & black traveler wires go to the two brass terminals and the load black wire goes to the black screw.

You can tell when you have the HS210 installed on correct 'line' box in that you should be able to establish the WiFi connection regardless of the HS210 switch position.

p.s. One non-measurement clue which may help idenitfy which box is which:

In the two gang box - does the black wire in the 2-wire romex (the black/white/ground) also supply the other switch in the box? If it does, then that would definitely be your Line wire

Also in your images - a little hard to make out, but looks like the black wire that you have tagged line/load appears to be coming from the taveler romex (the same one as the red wire)? If so that is definitely not the line (nor load) wire, but a travleler wire.   (after blowing the image up, it does in fact look like this is NOT the case and the black wire in the traveler connection certainly appears to correctly come from the traveler Romex; I cannot see where the actual Line/Load wire originates however) 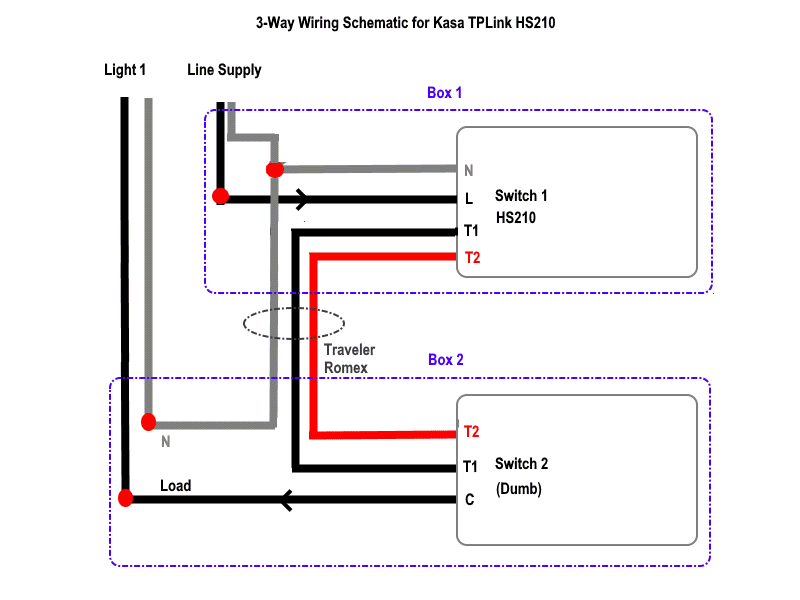 I'm going to give it another go this evening... I think what you've said makes sense to me.

I have both a multi-meter and a non-contact voltage detector. I will take everything apart and cap it all and try to figure out which black and white romex is hot.

That will be the gang where i will install the 3-way... and i leave the "dummy" switch at the other gang.

We'll see how it goes!

That will be the gang where i will install the 3-way... and i leave the "dummy" switch at the other gang.

Incidentally (and I'm not nit-picking here - just to clarify) - many refer to that other switch as a 'dummy' - it's actually  a 'dumb' switch i.e. 'dumb' as in 'not smart'

Dummy would imply it is not functionally being used for anything. 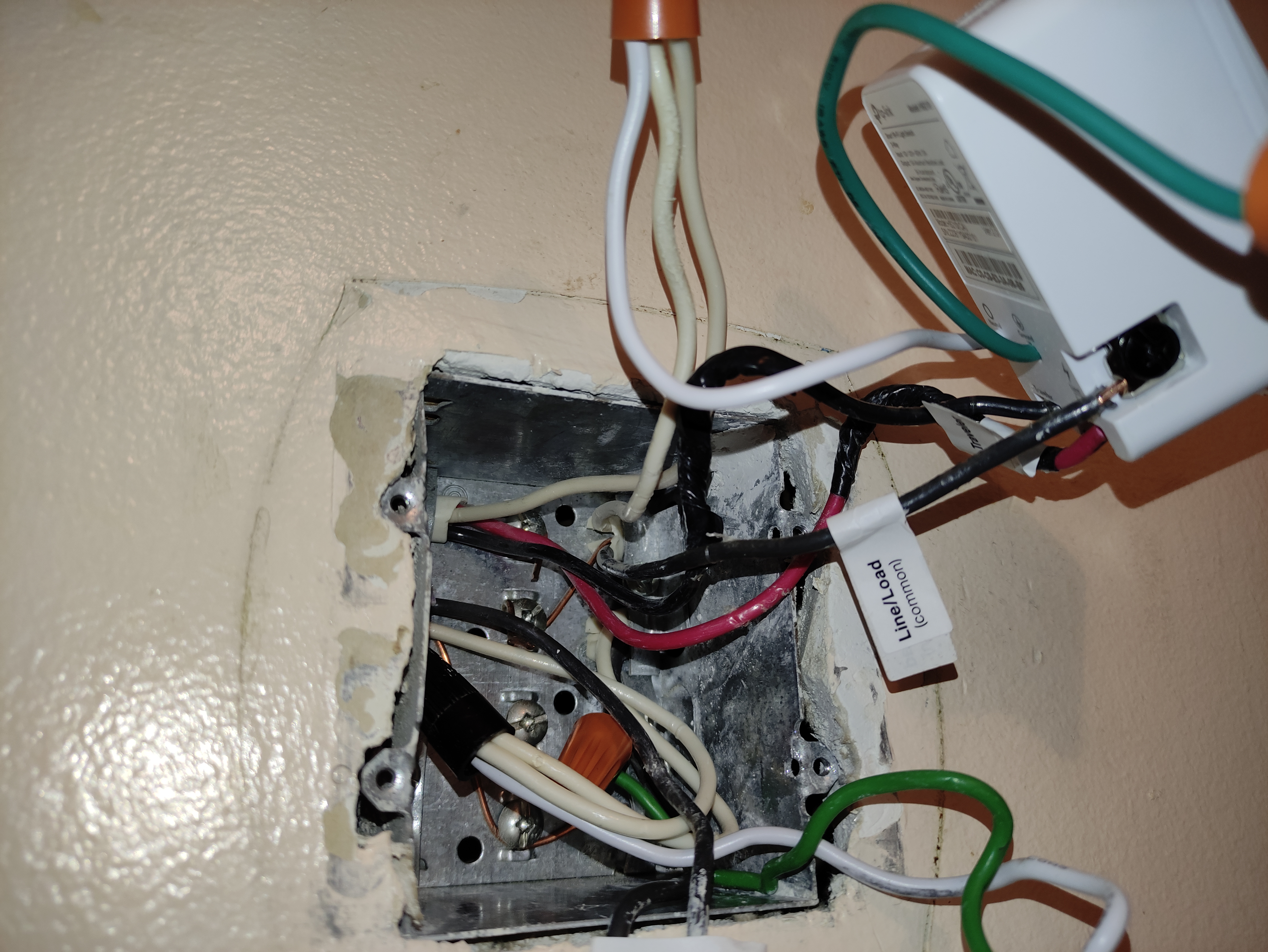 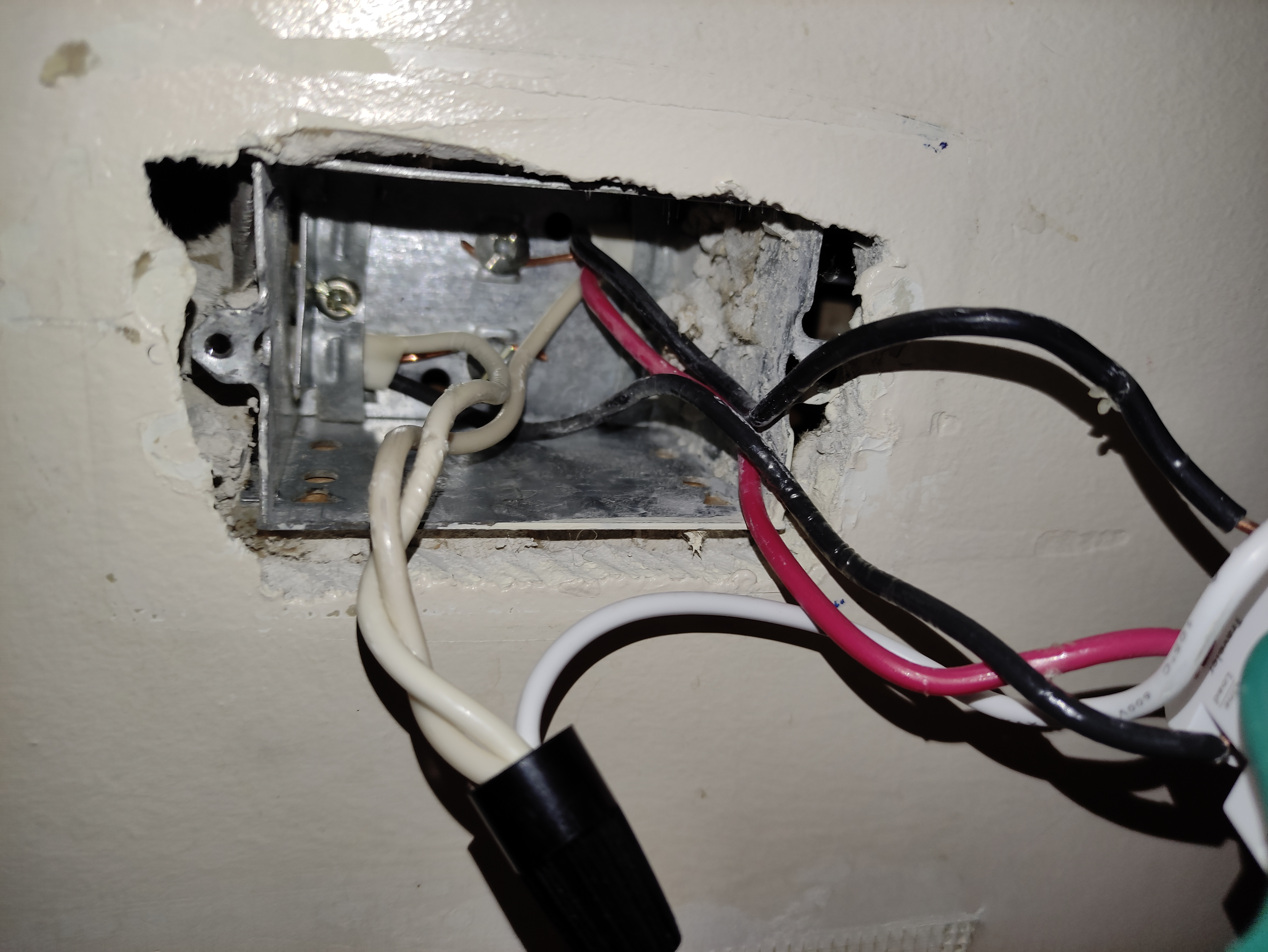