@Electroman Is that the only Romex cable in the Switch Box? This is definitely a 3-way installation, yes?
That cable with the black/red/white is the Traveler Romex -  there should be a second black one that is either the line from the breaker or the wire to the load
i.e. there should be all three screw terminals (plus neutral and ground) connected to the HS210
See the tutorial in the Stickies

On the box with only one romex(4 wires) when both the red and black are attached to the travelers the lights stay dimmed but you can't do anything.

Where does the red wire go on the other 2-gang box?

Since you only have that one Romex in the first box, I suspect that the white is not actually a Neutral and is the 'other' Traveler wire. This is not uncommon (although the installing electrician SHOULD have identified the white wire with tape if that was the case.

Question - when you removed the 'old' switch - was that white connected to it? (and same for the second box incidentally)

If the white wire WAS connected to the old switch it is definitely a traveler - dumb switches never have a neutral connected to it.
(It's always a good tip to take images of your original setup before you disconnect that you can refer back to - maybe bit late for that though)

I need to study that second 2-gang box better - can you remove the other switch so I can see all the contents of that box?

For the HS210, all the termninals need to be connected - one line/load (the common) and both Traveler Wires.

The one romex box did have all wires connected, including the white wire, I wish I would have taken a pic, if I cant use an hs210 here what can I use? Here is a pic of the 2nd box

@Electroman So if all the wires were indeed connected to the original switch at the single-gang location, then indeed that white is certainly a traveler.

That centre switch is also a 3-way, but presumably a different Light circuit?

On the Romex that is connected to the HS210 in the 3-gang box, it appears that the red wire goes over to a wire-nut - I presume that must be the Line Voltage
So that would suggect that the Switch in the single box is your line end box - the red is actually the line voltage and the black and the white are the travelers 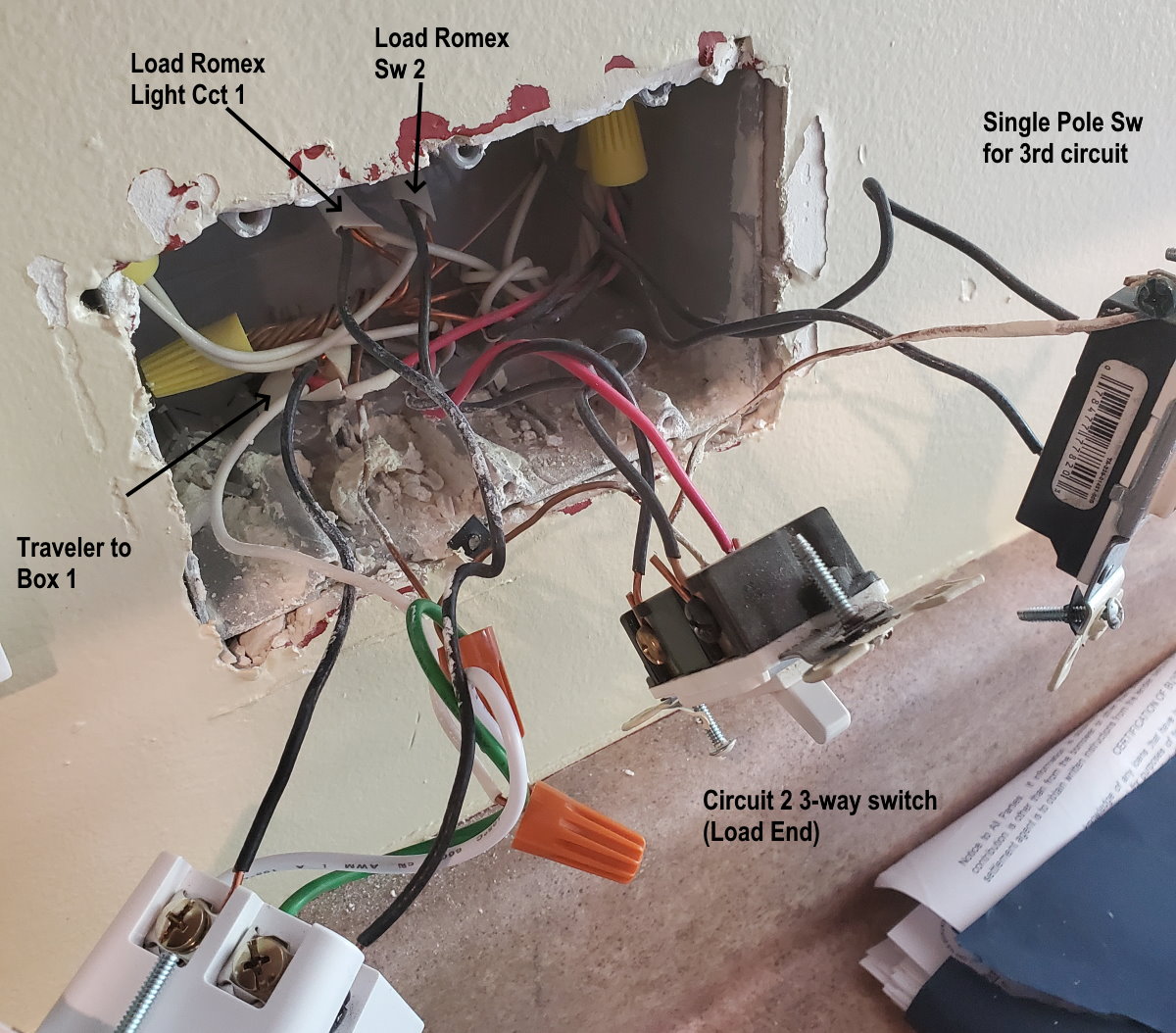 So the big question is what to do ..........
A prelimary question would be - is it critcal that you maintain physical control of the lights from both switch locations? (i.e. ability to manually turn the circuit on/off from both locations)?

Or - I can give you a suggestion for an alternative device that does not require Neutral to utilize 3-way control - if you want to go that Route, send me a PM and I will respond with details privately (this is the Kasa forum after all)

One quick post-script edit - in the marked up image I designated the second circuit with the 2-conductor wire as the load end and the switch as the load switch - that is not necessarily the case, it COULD be the Line end - you would have to measure the voltage on that to see which )

But for the circuit in question, I think I have it correct. 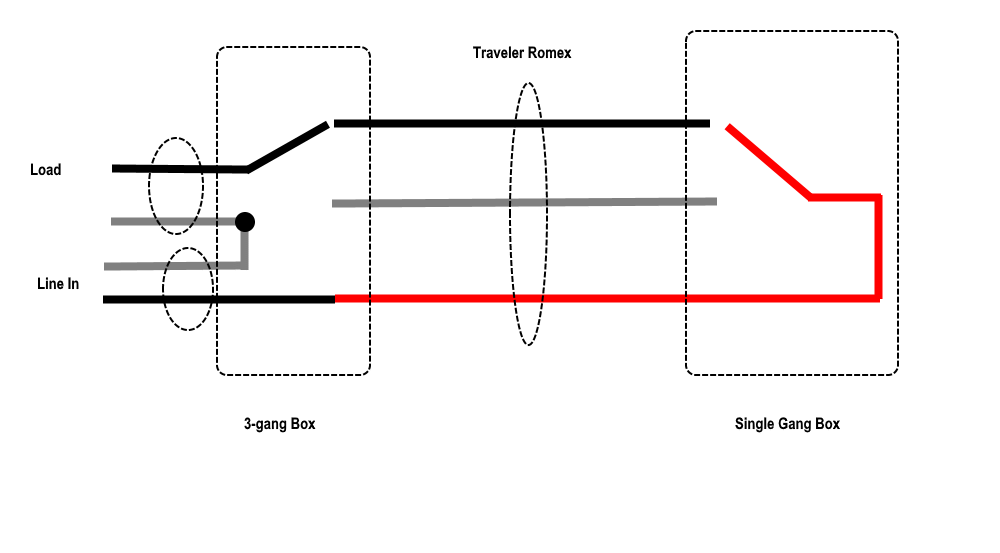 "That centre switch is also a 3-way, but presumably a different Light circuit? "

Yes that switch works with another switch by my back door.

Am I correct that the wiring for the HS210 in the 3-gang box is currently correct then?

and the issue is in the 1 gang box because I technically do not have a neutral?

Am I correct that the wiring for the HS210 in the 3-gang box is currently correct then?

and the issue is in the 1 gang box because I technically do not have a neutral?

@Electroman No unfortunately neither is correct (again the white is not neutral) -  it would be possible to install a smart switch in the 3-gang box, but you cannot wire it up a traditional 3-way circuit.

I think this should work however 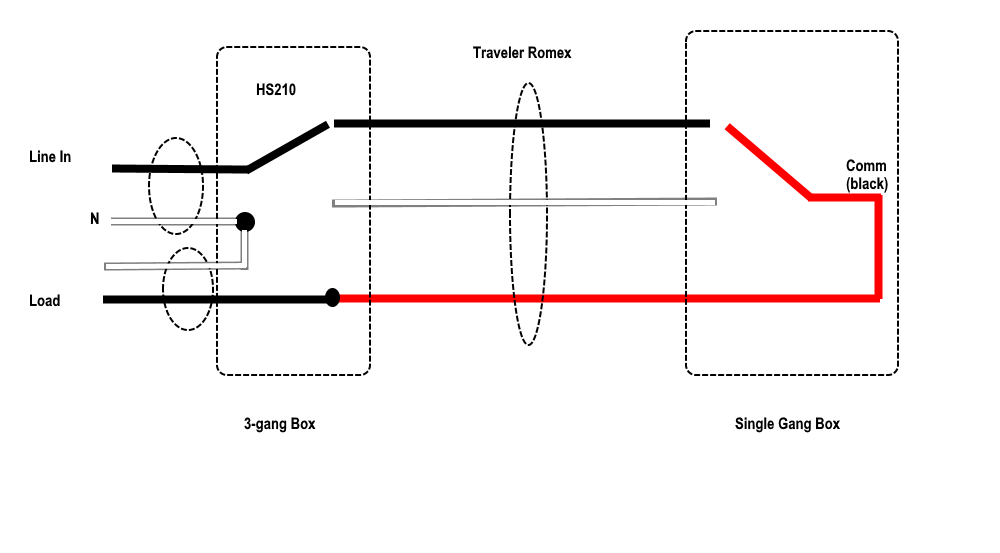