I got today my new TL-WPA8630P KIT and quickly installed it. Big surprise: the theoretical data rate is in the interval [75Mbps,125Mbps]  (info from tpPLC and the Web Configuration tool).

The real speed is actually way lower: average 19.9 Mbits/sec. I used iperf3 for that.

Setup: iperf3 running in server mode on one of my local severs:

There is a RE450 as well in the network, but I would not count it as it is just a WiFi extender and doesn't play any role in the ethernet + powerline equation.

Well, knowing that the powerline is not very long (really generously 25m), I thought to make a test more closely one from another.

Well that was very curious - closer than that they would not get. Well, maybe they have some internal filter or something - I thought - so I plugged them in 2 adjacent power plugs mounted on the wall: data rates in the interval of [350Mbps,450Mbps] ( tpPLC).

The theoretical advertised speed is 1300Mbps via powerline and with the interference from the powerline, I was ready for 400Mbps near my desktop PC plug, not 10cm from each other.

Is there anything I can do to test them or to improve the quality?

- The above are LAN bitrates NOT Internet and the Archer C7 router is NOT provided by the ISP (basically the ISP is not involved at all in all of this - I don't care about the internet at this point);

- No major appliances were running apart form the TV;

- The server I've used supports way higher transfer speeds: Tested from the same spot via WiFi provided by the extender TP-Link RE450. The server is used generally as a NAS.

Acctually, the situation got worse than before. The only place where this stuff is giving any acceptable bitrates is in the most useless place possible - 1m form the router.

Is there anything I can do? Is there any environment where I can test it and get at least 1Gbps (out of 1300Mbps advertised)?

Hi, what is the bandwidth you paid for your ISP?

Are those speed mentioned the powerline link rate between the two powerline adapter at different locations? What is the actual internet speed you can get from the TL-WPA8630PKIT? including wired speed and wireless speed.

You can change another socket to plug it and ensure the firmware is up to date.

Try to change wireless settings on the powerline adapter to give it a go.

Maybe this diagram will help: 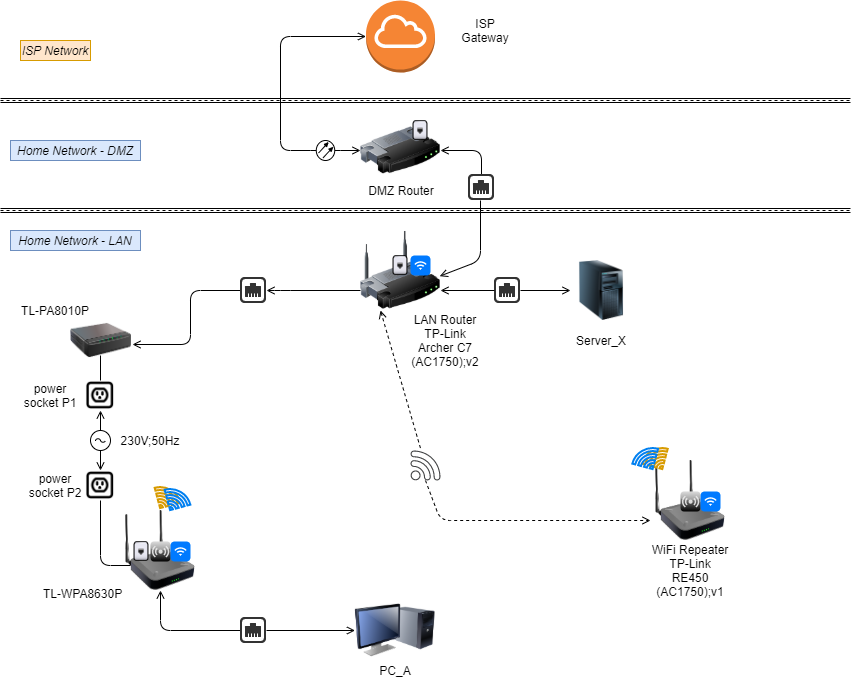 This is irrelevant. As mentioned in the initial post, there is no ISP involved. I am not calculating the Internet Connection speed, but the bandwidth between 2 devices in the same local area network:  PC_A and Server_X on the diagram above.

Here are the ones calculated by tpPLC - the speed between the 2 powerline adapters:

Did that. Again, i do not really care about the wireless on this adapter, but the data rate between the 2 powerline adapters.

The Firmware is up to date.

Tried several sockets: I included 3 cases only in the table above as these are the relevant cases: Where I need it, On neighboring sockets and on top of each over.

As said before - irrelevant. But if it's really important: not higher than what I can get from the LAN: 20Mbps.

Measures oscillating in the interval [17Mbps;24Mbps]

Did that. Again, I don't really care about the wireless on this adapter, but the data rate between the 2 powerline adapters.

Am I doing something wrong? I am getting 30% of advertised data rate using 2 head-to-head power sockets. Is this normal?

Thank you again for your help!

It will be soon 6 months since the original post. Do you have any updates on the topic?

1. I am not interested in the internet speed but in the network speed.

2. Am I doing something wrong? I am getting 30% of advertised data rate using 2 head-to-head power sockets. Is this normal?

Thanks in advance for your time!

Could you please help me run a simple test:

By the way, may I know where are you located?