I just installed a TP-Link Archer T4E wireless adapter on a new PC build, but it is randomly dropping the connection to the 5GHz band.

I've had some luck reconnecting by either shutting down/turning back on the computer or disabling the device in Device Manager and then re-enabling. Though most times I'm just met with a "Cannot connect to network" error in Windows. (2.4GHz band usually works with this adapter, though it does throw the "Cannot connect" error occasionally as well)

I've tested with different devices (tablet and laptop) and they are able to connect with no issues. The laptop has actually been running on that same 5GHz wireless connection for about a year now, and I've never had issues with the signal dropping, and still don't. (Laptop not on/connected while having issues with the desktop connection)

The computer is physically in the same location as the laptop was, the router is in the laundry room, across the hall, maybe 25-30 feet away. The only obstruction between the adapter and the router is a wall and a door.

I'm at my wits end, I've tried uninstalling/reinstalling drivers, using the generic windows drivers (the ones installed with fresh windows install), using the TP Link drivers, resetting router, and nothing seems to work. In any case.

Any suggestions would be highly appreciated.

Edit: If it matters, the router is an Arris SBG10

Try this driver to see if it clears up your 5G issues: link

You will need to manually install the .inf file for your respective system.

@Tony i can't downgrade my t4e driver. can you tell me how to install this?

@Ercan Finally, I've figured out! The fact is that problem was not about our T4E Wi-Fi adapter. You should disable all of the Microsoft WiFi Direct Virtual Adapter drivers in Device Manager. 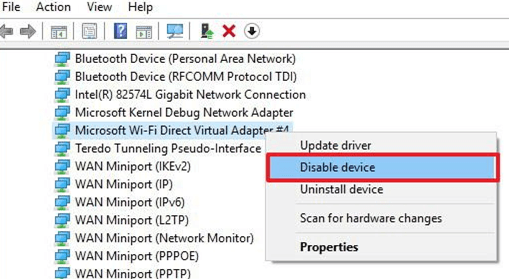 If the first method did not work for some reason, you can use the PowerShell command to remove Microsoft WiFi Direct virtual adapter.

1. First, open an elevated PowerShell window. To do that, search for PowerShell in the start menu, right-click on the result and select "Run as administrator".

2. In the PowerShell window, execute the below command. It will first stop the running virtual adapter. You need to do this first to disable it fully.

3. After stopping the WiFi Direct virtual adapter network, execute the below command to disable it. Once the adapter is disabled, you will not see it in other applications or devices.