I recently installed an Archer T4E adapter in my system and have been having ping spikes of up to 3000 ms. They occur from this PC to an outside network (for instance pinging google.com) and also to the router I am directly connected to (in this case a TP-Link AC1900). These spikes do not occur on any other computer connected to the network, either wired or wireless. Additionally, these spikes only seem to occur after the computer goes to sleep and then wakes back up. A restart fixes the issue but that is an untenable solution in the long term as to play any online game spikes anywhere near this high are unacceptable. Here is a screenshot of the command line ping tool pinging my router. 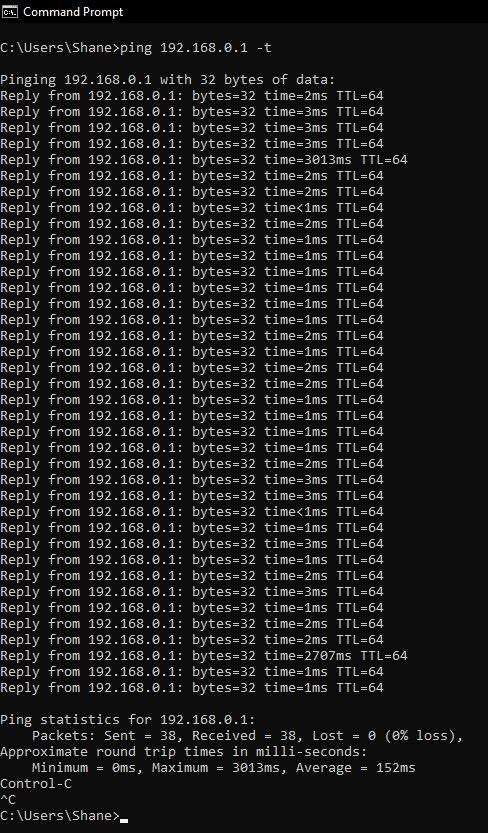 The gaps between the spikes are variable, sometimes they are spaced over 20 seconds apart and sometimes they occur every 4 or so pings. I have the most recent driver installed on my system. I have also tried rolling back to a previous version of the driver but the problem persisted so I reupdated to the new driver. I downloaded it from TP-Link so it is the most recent one available, though the actual driver release date is in 2018. I have also turned off windows update's ability to upload OS updates to other computers. My windows is up to date, though it is windows N, however, this should have no difference from regular windows 10 home. I have also tried changing the power management settings of the card to not turn off when windows goes to sleep however this did not improve the issue. Also, using a wired connection removes this issue, so it is definitely a local problem specific to wifi, not network connections as a whole. Any help would be greatly appreciated, as I have searched several times for solutions to this problem and none of them have provided a fix.

Edit: forgot to mention, restarting the windows WLAN Autoconfiguration service sometimes fixes the issue, but it is not a permanent fix, nor a solution to the underlying problem. This does not always fix the issue anyway.

If the computer has hits own wireless card test that to see if you still get the spikes.

Reboot the computer in safe mode with networking and test the T4E.

Another user with a similar issue found out their cloud software was updating (Dropbox) in the background and didn't realize it.

I neglected to mention it is not a pre-built PC, but one I assembled. This is the only wireless card in it, and rebooting into safe mode with networking disables the card. I can't use any of the available workarounds to enable it, I think because safe mode disables the drivers for the card.

Once back into a normal boot instead of safe mode I looked through incoming/outgoing connections in windows firewall and tried disabling each of the connections that I thought might have an impact (like Office, Onenote) but that did not change anything. There is no network activity as viewable in resource monitor that is not a system connection, my browser, steam, and discord. I also do not have much network activity when I am trying these pings as though something is downloading or uploading. I am at a loss for what could cause this issue.

Please install these drivers which are meant to improve the stability of the Wi-Fi connection: link

I contacted support who told me to download this driver:

I installed it following this guide:

Everything seems to be working okay so far under the same testing conditions as before.

Never mind, I am back to having the same issue, even after reinstalling that same driver. I have no idea what to try next.

Additionally, now even restarting does not fix the issue. It just keeps the spikes regardless.

Please reach out to our support team since the driver is not resolving your issue.

Finally I tried this, and it seems to resolve it :

@LOrD77 Yes, that is the same solution that I used. It's absurd that this is the fix instead of a driver change. I'll avoid TP-Link products in future.