Do I have one or more defective Decos???

I have the 3-pack Deco set up in my 3500+ sq ft two-story home, with the two satellites connected to the main AP via wifi (no ethernet backhaul). Until one (or both) of the last two firmware updates, things seemed to be working okay, but that is no longer the case, as the measured speeds are all over the map across the different hardware devices.

Specificially, using beta.speedtest.net when connected to the each of the 3 different APs, there seems to be a wide range of speeds between each Deco. Additionally, the is no consistency in which pieice of hardware lags behind the others. During testing, I've been able to isolate it to one of the three Deco's, but then after rebooting the suspect Deco, the other "satellite" Deco becomes the one with slower speeds than the other two.

I've twice reset and reconfigured all of Decos (PITA, especially since I had used the Address Reservation feature for my 6 wi-fi security cameras), but I'm still seeing 5-10X variances between download speeds across the 3 different Decos.

FWIW, the way I test is to using my MacBook Pro, disconnecting and then reconnecting my Wi-Fi when standing next to each of the Decos to ensure I'm connected to the closest one (and confirmed by checking the BSSID #).

Anyone have any idea what might be causing this variance? Do I have one or more defective Decos?

FYI...The three Deco's are all on the top floor and within 25 feet of each other with little, if any, walls and other possible interferences. I've tried different locations for each across the house and so far this seems to be the best locations to enable good coverage throughout, atleast when all three Decos are functioning properly.

As I've mentioned in other posts, I'm doing all I can to be patient and appreciate these for what they are. I've considered Eero and others, but based on the support and Redditt forums I've seen, each vendor is dealing with their own issues. I guess this is what we sign up for when we decide to be "early adopters."...
0
0
#1
Options
4 Replies
Posts: 663
Kudos: 4
Solutions: 0
Stories: 0
Registered: 2017-06-28

what exactly is the speed of each deco unit? and also check the link speed on your mac pro when it connects one deco. it would be better if you can upload the speed test screenshots.

Did some more testing tonight. Even tried moving Deco's around to different locations, issue still persists and seems to alternate between the two Deco's not connected to the modem directly. Here are the speed test screenshots (from Speedtest Mac app).

probably the 36.4Mbps one is on 2.4G wifi. you can check the link speed on your Mac to verify.
go to Network Utility, then hit the Return key to launch the app. go to Info to check link speed. it will be no more than 300Mbps on 2.4G wifi, and it may be 72Mbps or 150Mbps. the Mac automatically connects to 2.4G wifi because its signal is stronger than the 5G, so the deco let you connect on 2.4G

Thank for pointing that out, actually I did confirm that I did have a 5Ghz connection during each test. I also tried standing at different lengths away from each Deco, ranging from 1 - 10 feet. In each test, the results were the same. 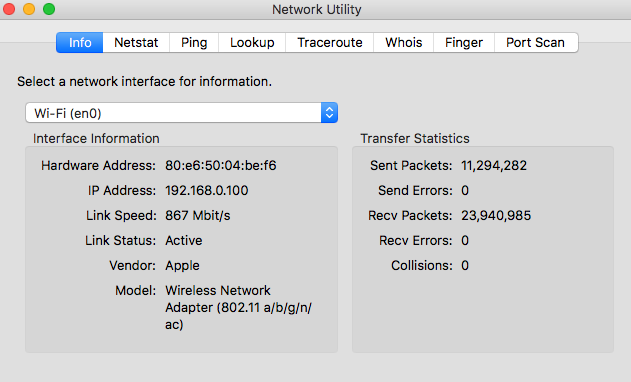