Therefore I have a three questions:

3. Qhat could be the other source of the problem if not the SD card? 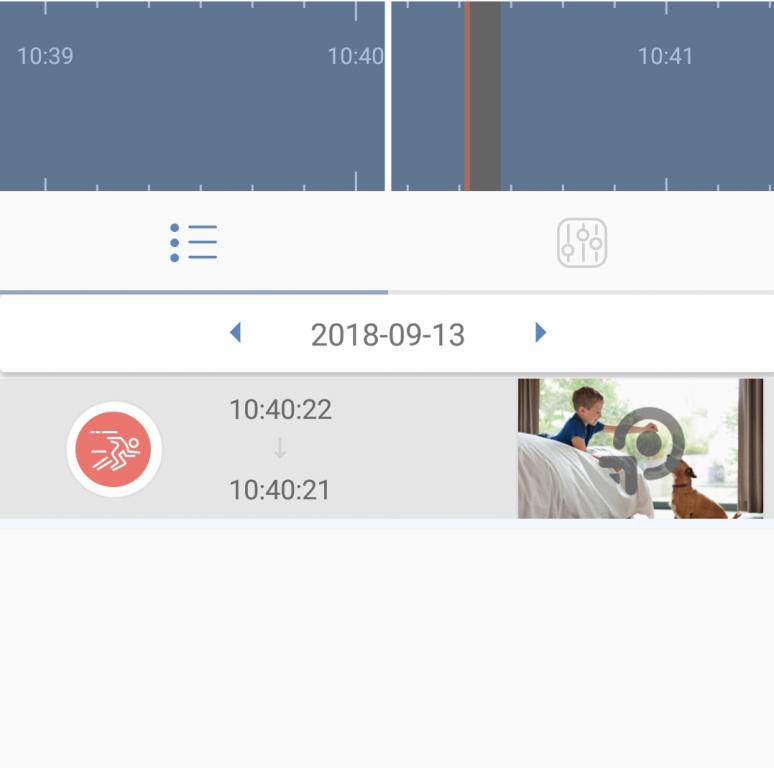 Therefore I have a three questions:

3. Qhat could be the other source of the problem if not the SD card?

Do you mean that the SD card stopped recording after the motion detection? There is no video stored on the SD card then?

2. To find the root cause, we still need more details: ensure the 24-hour recording is enabled; format the SD card and give it a go; or change another SD card to do a comparison test.

stawo
LV2
2019-03-13 07:40:57
Posts: 35
Kudos: 0
Solutions: 0
Stories: 0
Registered: 2018-11-30
Re:Re:NC450 - recording problem
2019-03-13 07:40:57
regarding point 1 - my sd card have 32GB capacity so it should be cooperate witch my camera without a problem.
regarding point 2 - as you can see at the attached screen shoot I am using 24-hour recordin option and sometimes (not always) directly after motion detect camera (or maybe sd card) stops recording. Then after a while recording is back automatically, but I can't see what was the source of the motion detect becouse there are no recording of this moment on the sd card and in the described case, the camera does not send e-mail notifications with photos (despite the fact that this option is enabled).
Summary:
I do not know which device stops recording, maybe it's the camera or maybe the memory card.
Yesterday I was format the sd card on PC to the FAT32 format file (I read somewhere that the samsung sd card have default exFAT format file - maybe it was source of the problem) and now I'am testing my camera (with and without 24 hour recording option).
If the problem will coming back i will take a sreenshoot and show they here.
0
0
#4
Options
Posts: 13659
Kudos: 1161
Solutions: 1584
Stories: 14
Registered: 2018-12-24

It is hard to say the root cause, while please take some time to test whether it works fine after you format the SD card to fat32.

For the notification email, have you ever set it up with the instruction below yet? You can refer to page 33-35.

Any udpdates, just let us know.

I would like to return to the subject of problems related to motion detection function.

As I I wrote earlier, I have a camera NC 450 ver. 2 with the 1.5.0 firmware. Generally camera works very well, but sometimes it has a problems with motion detection function, i.e. after the motion detect the camera stops recording for a moment (if the 24-hour recording function is activated) or records the moment of movement detection but the recording is impossible to be played. In addition, in this moment camera sends a notification to the phone application (3.1.12), but sometimes does not send an e-mail notification, even though this function is enabled.

In addition, I noticed that the camera sends me motion detection notifications almost every time when the camera at the morning automatically changes the view mode from night mode to the day mode, despite the fact that there wasn not any motion.
The problems described above with the motion detection function occur mostly during notifications sent when the night mode is changed to day mode.

Below I am sending a screen with the problem. As can be seen after the motion detection at 4:50:22 the camera stopped recording for a while (the 24-hour recording function was active)

Motion detection occurred after switching the camera from night mode to day mode.
On the second screen you can see that after detecting the movement of the camera changed its position itself, and the clock went back an hour.

In addition, I am sending a screen showing the problem that occurred when the 24-hour recording function was turned off

I must also add that after the above problem will appear, I need to restore the camera to factory settings, because in every next motion detection moment, the camera stops recording (or records so that the recording can not be played) and does not send email notifications, even if that the function is on

What the notifications are when you swicth to the day mode?

Meanwhile, please try to disable 24-hour recording and check whether the motion detection can be recorded and played successfully.

Thanks in advance, and have a nice day.

stawo
LV2
2019-06-26 09:06:14
Posts: 35
Kudos: 0
Solutions: 0
Stories: 0
Registered: 2018-11-30
Re:Re:Re:Re:Re:NC450 - recording problem
2019-06-26 09:06:14
First of all, I do not manually change the camera view mode from night mode to day mode - the camera do this automatically.
Very often (but not always) when the motion detection option is enable on the tpCamera app and at the morning when camera automatically changes view mode from night mode to the day mode, I receive on my tpcamera app a notification that the motion has been detected (despite the fact that there was no any motion). It seems to me that this does not happen at the evening when camera automatically changes view mode from day mode to the night mode.
The problem with image recording witch I describe appears mostly (but not always) after this kind of motion detection i.e. after automatically change view mode ftom night mode to day mode.
After such motion detect, sometimes everything works well i.e. camera properly records the image and sends notifications to my tpCamera app and to my email, but mostly after such motion detect camera stops recording the image for a moment (which I showed in the attached pictures) and sends to me notification only to the tpCamera app without emial notification.
I the second case i.e. when the camera stops recording, sometimes (but not always) camera itself changes the position and the clock displayed on the preview (it seems to me that it switches the time zone from GTM to CET).
Ather  the problem appeared I always restor my camera to the factory settings (by web browser), becouse after that my camera had problems with every next motion detect (it stops recording image in every next motion detect and do not send to me email notification). I do not try yet "disable 24-hour recording and check whether the motion detection can be recorded and played successfully" but I try this i the next incident.
SD card formating on PC did not helpd. My problem appeared before SD formating and appears after this.
0
0
#11
Options
Posts: 35
Kudos: 0
Solutions: 0
Stories: 0
Registered: 2018-11-30

I also noticed that in this automatically change view mode moment the image on the preview gets green for a fraction of a second (look below - I changed manually view mode for the needs of making this screen) - I do not know if this is the correct camera work or not.