Troubleshooting Has connected to TP-Link extender but no internet, what can I do?

The Range Extender becomes more and more popular nowadays with the demand for enlarging the Wi-Fi coverage area. But you may get in trouble to make it work. What can I do if I failed to configure my Range Extender? Today, we will show you several common situations you may encounter and how to deal with them. We will take RE450 as an example.

Please follow the instruction mentioned below to configure your RE.

2. You can watch the setup video as well.  https://www.tp-link.com/support/setup-video/

Case 2: Failed to Connect  to the Main Router or Errors out  ‘No Host Network Connection:   Signal LED/2.4GHz/5GHz LEDs are OFF.

Or you will see the picture below after logging into the web UI.

What can I do then?

RESET: With the extender powered on, use a pin to press the RESET button (pinhole) until all the LEDs flash once

Case 3: RE has connected to the main router: Signal LED/2.4GHz/5GHz LEDs are ON but still no internet access.

And you will see the Status page on RE shows as below: DHCP Server (On), Dynamic IP (Failed). 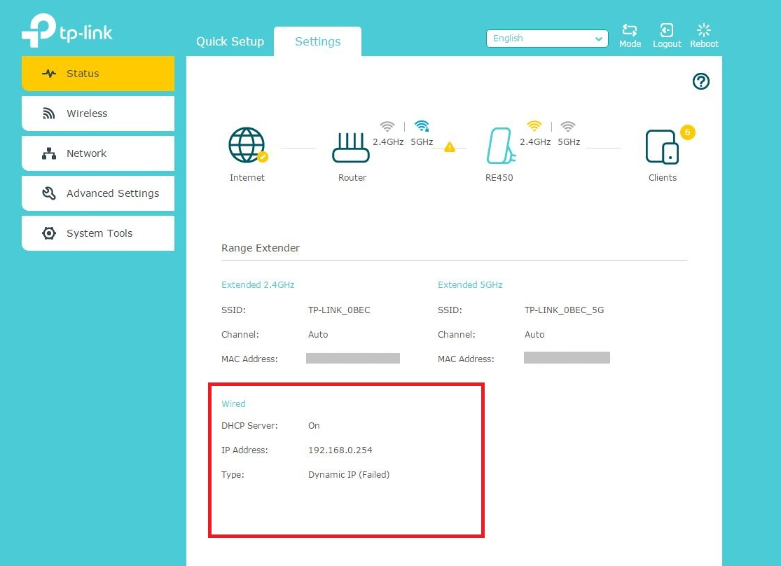 What can I do then?

1.  First, the root cause is that the RE/clients failed to obtain IP address from Main router. A static IP and specific DHCP server settings on extender will sort this out.

Or connect your PC to the Wi-Fi you want to extend. Start -> CMD ->ipconfig /all. You can get  Subnet Mask, Default Gateway and DNS Servers values from there. 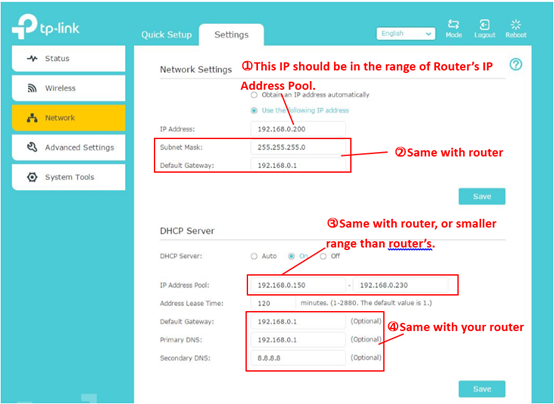 If the issue persists despite the above steps, please Start a New Thread for your range extender with the troubleshooting steps you've tried and we'd love to look into that further:

3. Try to log in range extender web page and share a photo of Status page after setup
4. Firmware and hardware version of RE:  How to find the hardware and firmware version of my TP-Link device?
5. For dual-band extender, RE failed to connect to 2.4Ghz or 5Ghz or both Wi-Fi bands.

What should I do if Internet speed becomes slow via Range Extender?

Unable to Connect to WiFi Extender or Saying Incorrect Password

@M_ok I purchased the extender to provide stronger wireless connection to my Roku device. I thought I had it configured correctly. But the Roku can access the wireless but not the internet. Also, I cannot use my iPad with the extender. It works with my router on my other network, in the same room as the tv. Please help!

Help me please, if u want more info, tell me

Love how to this day they still haven't fixed this broken product, I used to own an RE450 I noticed today that one of my customers has issues with the v2.

And the lack of response from TP-Link is just the icing on the cake.

I have done my testing on this, it looks like 5Ghz is bugged with password issues, once you leave the device idle for a while it won't reconnect, it seems to be semi workable with 2.4Ghz

The second issue is that the RE450 does not maintain a connection with the router at all (a simple ping would probably solve this), problem here is another device could take the IP (I know you can set it to static, but your average user won't know or want to do that)

The hardware is good, but the firmware is embarrassing.

Wow. Ok there's definately a bug somewhere in the way these access points are working.

Here's what I have found..

Broadcasting to clients via 5Ghz for minimum coverage on same SSID password correct.

and one device that moves between node 1 and 2.

Once setup i can use fing android app to discover all ip addresses from both nodes. After a while i noticed I could no longer access printer from Node 1.

Run a discovery scan while at node  and all i could see were the clients connected to node 1.

So lets go have a look at node 2. Verify device to connect to node 2. Run a scan...and heres the interesting thing.. only the router and clients connected to node 2 are visible..so whats going on here then...restart the access point. Everything comes back as the devices are just at the edge for a second they go to the 2.4 band then as the access point comes back they hop back onto the 5Ghz where they were before. I know this happens because the printer has a "print direct" feature and wants to be on whatever frequency its main connection has...and everything is back.. going to the "status" menu for the re450 v 3.0 shows an active internet connection. all good you think.. Leave it alone and come back a few hours later. The same thing has happened again.

I read @TSark comments, which gave me the ideaof a continuous ping because the RE450 is entering sleep. So from Node 2 continuously ping the printer.. and would you have it hours later.. almost 1 whole day now  and its still up.

Devices with dynamic ips are able to to move between nodes and still work, and devices with static ip's are also happy as a clam.

The cases you have on page 1 are the ideal and even if everyone follows them the RE is still going to drop completely because there is no network activity.  At that point it doesnt matter whether or not the IP addresses are static or automatic, it will only register on NOde 2. NOde 1 will only see the access point and not all the devices. so as the other users and myself have been experiencing it drops, and you have no choice but to restart the RE. Also not all ISP's are going to allow you access to their router to be able to assign an ip to a mac address i prefer my network equipment to start from the back.

WIth my setup  right now...if i scan network from node 1 i see everything. If I scan from node 2 i see everything.. thats how it should be. I shouldnt though have to set a continuous ping on NOde 2 from PC to printer so that all this is still working several hours later.

Thank you for your detailed description.  May I know do you use RE450 in AP mode (wired to router) or RE mode (wirelessly connected to router)?

If continuously pinging printer helps with the issue that PC (under node1) can not find printer (under node2), it is a possible printer is in ' sleep mode'  or failed to respond the packet sent from RE.

When this issue happens, please use PC (under Node1) ping to ping printer, and see does the pinging printer will ' activate' printer and allow PC to find printer every time?

Does printer work fine when it was connected to main router before?   May I know the model of your printer?

Does other devices connected to RE always have Internet?

Thank you in advance.

The model of the printer is HP Color LaserJet MFP M281fdw.

First of all..Thank you for replying. I thought it would be in vain.

A: Before I started this reply I wanted to double check everything was working. As i had last set it up. Node 1 is connected to node 2 wirelessly.

Its all good. I have a 3 way ping setup.

PC is pinging PC on node 2.

PC is pinging the printer

PC is also pinging a device on node 1 which sometimes goes down when i turn it off for giggles.

I just did a network scan on node 2 i can see everything, walked over to node 1..and here is the thing instant connection to the Wifi access (node 1) point.

Here's the problem with the out of the box if i dont continuously ping, things go quiet on the network then when you do a scan from either node you dont see all the devices, the printer the computer and any other devices connected.

Q: Is it possible the printer is going to sleep?

A: No. How come all the other devices drop off the network scan.

Ping as its working right now is keeping the ...shall we call it.. "bridge" active between the two nodes.

Q: Does other devices connected to RE always have Internet?

A: Yes all devices connected to Node 2 have internet access, though in the "Status" panel for the RE450 it still shows that there is no internet connection..Its as if the first time The RE450 was turned on it did a ping to tht internet didnt get an answer back then never tried again.

Right now if i stop all the pings come back in lets say 4 hours, the ping across nodes will fail. This was driving me nuts until I saw @TStark's post, and other users barely get a day of uptime.

And this is another issue with the out of the box RE450. How 2.4Ghz is replicated Id like to add.

When both nodes are broadcasting on the same channel it creates a lot of noise for the original access point to deal with, and if there is heavy network traffic it all grinds to a halt. Especially if you have used the range extender just at the sweet spot for signal. I have an S5 and S10 and several other devices. At 2.4 only the S10 will hold the signal to node 1, the S5 can not. Even when within range of a good signal from Node 2 newer devices cling to Node 1. In my current placement I simply can not use 2.4Gh on the RE450 extender without something going wrong, thats even if am continuously pinging. There is simply too much collision going on, and this introduces latency, and a host of other issues which are made even worse when you have multiple devices trying to get max bandwidth... Not least the RE450 will become very unresponsive when you attempt to login to the web UI. Only solution is a reboot there until the problem comes back or it get quieter on the network.

The re450 does not allow you to choose a different channel for the same SSID broadcast. This is why i have had to switch to the 5Ghz channel. I found it strange some were saying they had more issues with the 5ghz band more than 2.4Ghz. Was the other way round for me, the amount of devices i had connected to just the 2.4 all fighting for air time ground network to a halt at times especially some being just in the middle of th signal.

With my current setup, the SSID is still the same, but the channels do not overlap and roaming happens so seamlessly devices dont even tell me they have lost network connection.

Since i sent that last post while i write this one:

Now that is how the Wifi should work..only 46 packets lost, and not a single reboot, it would be higher if I hadnt experience a power cut since i last wrote. Even though my internet connection isn't the fastest, all devices on  the network and across the various nodes are able to get some bandwith.

Issue one RE450 going to sleep.

Issue two is the broadcast channel for devices connected to Node 2/ Re450. Should not be the same as the connection RE450 makes to Node 1. It works so much better this way. Please either allow us to choose a different channel, or in the event that the router/Node 1 is stupidly set to Auto by the ISP, the RE450 picks up that channel and uses the next clean channel it can find. If it cant find a clean channel then it just uses something else. While it gets a little noisy in some circumstances, you will be able to maintain much better throughput.

If there is anything else I can help with please let me know. I would really like to see some of the above issues resolved.