Success: TP-Link cellular router into load balancer (and then WiFi)

There have been a few threads on these forums with people frustrated by the fact that TP-Link doesn't officially support briding mode on its range of cellular routers (see for example here). I was annoyed too.

In one of the threads here, @Kevin_Z suggested a workaround: if you want to use the cellular router only as a bridge (ie, as a cellular modem) pull down the WiFi, take down the DHCP server, and put its IP addres within the range of the main router.

I wanted to create this thread just to say that: I followed Kevin's recommendations and it worked!

I now have the following setup (all actually using TP-Link gear). It fulfills the objective I was going for when starting these home network upgrades which was a dual ISP / cellular connection that uses the cellular line only for failover / as backup.

Because this is tough to explain using words, here's the diagram: 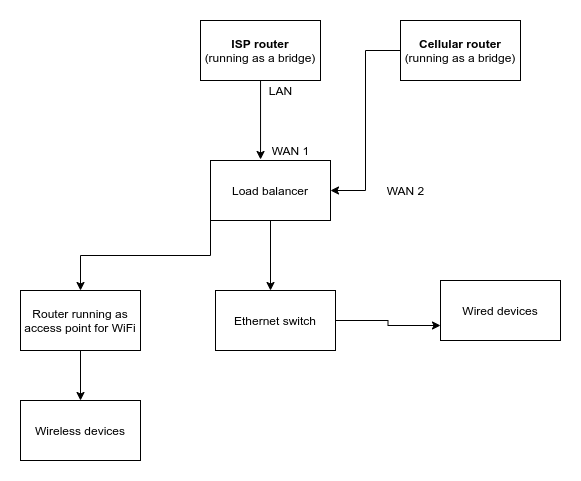 Both going into WAN ports on the TL-Link R470T+ load balancing.

From there I actually have one more TP-Link product (an Archer router running in AP mode) to bring out WiFi connectivity. As wel as a switch for all the wired gear on the network.

Sharing this in case it helps anybody also trying to figure this out.

Thank you very much for sharing the detailed configuration guide to make the cellular router into bridge mode. I would encourage you re-post this as a story in the below link, that would be helpful for other community users to get benefit from:

Once I have this issue resolved I will happily post a story.

Until then, I can't relaly recommend the method. Because it's not yet working as intended (in a nutshell, the load balancer keeps using the backup connection even when the primary is live!)

We will check it soon.