While I have tried many times resting and reconfiguring. I am on the latest Firmware version. Do not have this issue with the other ADLS router I have. Strange thing is sometimes I have to manually reboot the router as it completly stops responding (Wired and wireless). I will check if going back to previous F/W version helps.
0
0
#1
Options
2 Accepted Solutions
Posts: 16521
Kudos: 1545
Solutions: 1852
Stories: 17
Registered: 2018-12-24

To those who have this issue,

If your DSL modem router lost connection intermittently with this error message pops up, please provide us with the information attached below; then we can do shorten the whole process and able to give you a specific answer.

Note: Please answer these questions when this issue happens.

1. The LED status of the TP-Link router, especially the internet led.

2. The screenshot of the Basic-network page where you can see the error message.

3. How can you recover the network connection? Like reboot it manually or it will work within a few seconds/minutes automatically.

4. Please show us the full screenshot of the Advanced-status page. Especially the DSL status.

5. Who is your ISP and what is the bandwidth you paid? Please tell us the current hardware and firmware version of your router, as well as its country version which you can find on the back of the actual device, next to the model number.

Regarding the unstable connection issue of  Archer VR900 V3(EU),  please download and upgrade the beta firmware below.

You can get more help about how to update the firmware by manually from the FAQ:

Please feel free to connect us for further help if you have any problems!

Have a good day!

When it stops responding, how about status of all lights in the front panel? Can you still login its web interface? If you can, check Diagnostic results.
0
0
#2
Options
Posts: 4
Kudos: 0
Solutions: 0
Stories: 0
Registered: 2015-08-31

I am using this on Airtel Broadband service in India connected via ADSL+. 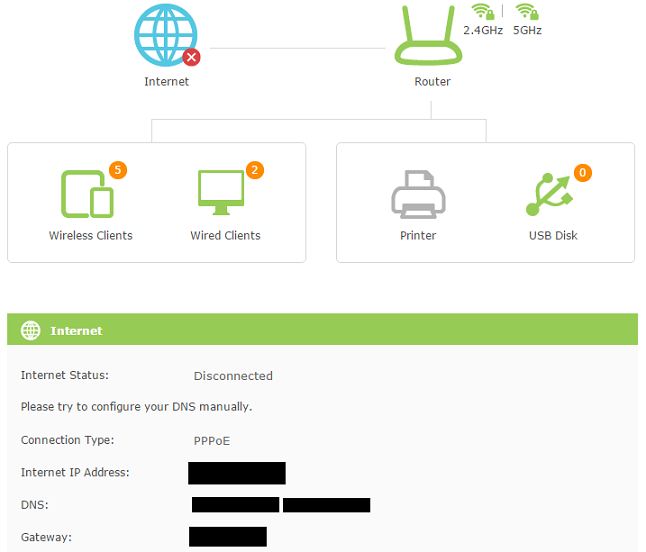 "Internet Status" also shows as "Disconnected" as well, as you can see. It goes into this state pictured on the screenshot above after it goes through the "Internet Status: Detecting" stage; which is after refreshing the page and within a few (like around 3 to 5) seconds.

At this point, the "Internet", "USB" and "WPS" LEDs are off. I can usually access the internet but however, sometimes Chrome gives some DNS related errors and can not open some pages. I can save and share those errors as well, if required. But they are usually DNS related errors, which show up when the DNS server isn't responding. I guess I'm using VDSL if that's important.

I've sent the VR900 to TP-LINK, and the guys told that it had some problems but have fixed them. But after I received it from TP-LINK, it's still having the same issue.

After some troubleshooting, TP-LINK suggested me to replace the VR900.