I recently added two P9s to my setup, reconfiguring the whole configuring a new network rather than adding them to the previous version. A P9 is the main deco to enable powerline backhaul to a problematic room - that element seems fine. The X60s, however, are alternating red pulsing with solid green.  Other threads suggest wired devices can be an issue, and initially it appeared that removing the sole wired device from the main P9 had solved the issue - but today it's back without the wired device [a NAS box] reinstated.

Oddly, my internet connection does not seem to be affected.  While it is somewhat difficult to tell which node I am connected to due to lag in the app, I am currently watching steaming TV with no issues on an Apple TV right next to one of the affected X60s [reportedly connected to it].  Speedtest results likewise seem as expected.

I need to connect two NAS boxes to the system, so would be good to get a resolution - though it seems that may not be the issue anyway.  For reference, various spatial configurations of the original three X60s didn't seem to have green/pulsing red issues.

@etiene can you share a picture of your network layout with us?

Apologies, the image doesn't seem to give me the chance to scale it down a bit.

Since yesterday the X60s have also shown periods of solid red - though again it's difficult to tell if that's causing issues as the app seems to lag in updating the network status.  Sometimes the X60s are claiming to be offline in the app - but generally at the same time they're showing green!

The internet/modem is in a meter cupboard outside the front door [apartment block with concrete construction]. Main P9 is on an ethernet connection to the modem, but sits in my office so that it is on the same ring main as the other P9.  I have a spare X60 that I'd love to put in the meter cupboard as the main deco [a currently unused TP Link 5 port switch could then handle ethernet backhaul to the office P9 and living room X60], but my understanding is that the P9s then wouldn't use powerline backhaul? 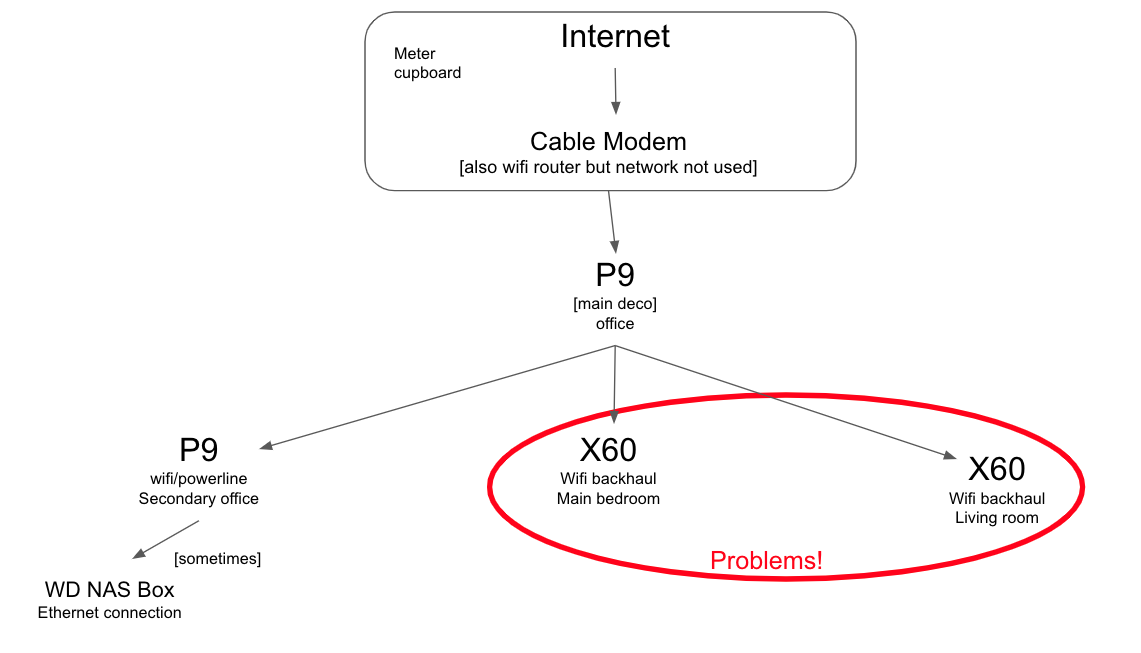 The two P9s will always use the Powerline for backhaul, as long as they are on the same side of the electric panel.

If you have ethernet connectivity out to the Meter Box into your office, then why would you want to place a Deco in the meter box?

In your drawing it is unknown the distance between the P9s and the X60s.  How do you know which P9 the X60s are connecting to?

A much cleared drawing and explaination may help in trouble shooting.

That doesn't seem to be true according to the docs here - states that for a mix a P9 must be the main deco. [edited to add] Just tried having an X60 as the main node in the meter cabinet - indeed P9s did not avail themselves of powerline backhaul, essentially just another deco.

Deco app reports connection to the office P9 from the X60s, this is as expected because the secondary P9 is in a room where wifi doesn't reach easily [hence the need for powerline] and is also further away from the X60s than the main node P9.  Distance to main bedroom X60 is about four-five meters through a lightweight blockwork wall [this one is honestly somewhat redundant].  Distance to living room is more like ten meters, through the same blockwork wall and down a floor [proper concrete].  Signal strength reported by the app is decent for both though, and wasn't an issue for the living room when the main node in the office was an X60.

"Note: When Deco P7/P9 works with other Deco models, the PLC Backhaul feature will only take effect when P7/P9 is used as the Main Deco."

I guess I have never configured and tried to use the P series without one as the primary Deco.  Well, you can always get a TP-Link AV1000 to add in and create your own independent Powerline Backhaul. That works!

Any ideas on this? Still happening - though network still seems to be ok.

@etiene Hi, could you mind trying to adjust the layout a little bit, like:

I used to see if P9 is not the main Deco but it is wired to the main Deco via Ethernet cable, the PLC backhaul could work as well.

Thank you and wait for your reply.

I think that was what I tried, though I will try it again - does the powerline backhaul appear as normal in the app, or is there some other way of working out if it's in operation?

That did work, though I'm pretty sure I had in fact tried it before.  I think what happens is you switch the main deco to the X60, everything else reestablishes its connections and the unwired P9 doesn't immediately find a powerline option so uses WiFi only. However, once I rebooted the unwired P9 it did establish a WiFi/PLC connection to the wired P9 and the network speeds support that.

I'm not sure the setup is as stable as would be ideal though: I had to unplug the main X60 briefly to connect a NAS drive and once it reestablished the network the unwired P9 lost connection to the network and would not reestablish.  I had to remove the P9 and add it again to get things back, so I'm somewhat concerned that the "unofficial" powerline setup is going to require maintenance after any future power interruptions.  I wonder if this is the reason your documentation is written to exclude doing so?