I just bought a UB4A nano USB Bluetooth adapter and my PC recognized it straight away, the drivers were installed and it's working well.

But I have a problem, I can't connect my Samsung A7 smartphone to my PC as I do on my laptop every day (that already has Bluetooth), it is detected by the PC when I add a Bluetooth device but when I try to select the PC from the Bluetooth devices on the smartphone I get the message "impossible to connect"! The only way I found to connect the smartphone is if I use it as a AP (Access Point) witch I don't want...I want a direct connection!

On my laptop as soon as I get near him, the connection with the smartphone is restored (I have it associated to Windows 10 and I have the Microsoft app to make calls), with the USB adapter on my PC it just doesn't connect...I don't understand why the smartphone is added and recognized by Windows but can't establish a normal Bluetooth connection....

Why is this happening?? Did I just spent money for nothing? The objective was to have my smartphone connected to my PC to send and receive files and to make calls by associating it with Windows...

As you PC already got a Bluetooth adapter, please disable the built-in Bluetooth and  remove all third-party Bluetooth drivers on your PC .

Can you see Bluetooth icon on your PC , please enable it and see it can detect your phone or other Bluetooth devices .

Select Samsung A7 phone as your Bluetooth device on your PC, what is the Error message ? Please share us a photo of if there is an Error.

Can other device pair with PC via this Bluetooth adapter?

Maybe I didn't explained it correctly, I have a Asus Laptop at work with built-in Bluetooth and my Samsung connects there without problems, in my PC at home is where I have the problem, I bought the UB4A adapter and installed it without problems (and yes, the blue icon appears) but only the PC recognizes the smartphone, it's kind of weird because the smartphone is listed on the Bluetooth devices but if I try to connect the other way around (Smartphone to PC) I get the message "impossible to connect"...that doesn't happens on my laptop, the connection appears active on both devices (I also have a smartwatch and at work the smartphone has the two devices listed as connected).

I'll try to take some screenshots of the connection on the smartphone on both machines so you'll understand it better.

@Mike80  Hello, thank a lot for your explanation.

If Samsung phone Bluetooth shows smartwatch is connected, please disconnect it, and only  connect to PC at home again on your Samsung phone.

Please pair home PC with a different Bluetooth device and see if the issue is only with your phone, if possible, you could test with a device which passed tp- ink Lab test here in Q8:

Can you share us a photo on your phone & PC, may I know the OS of your PC?

Let's see if we can finally figure this out...

I'll start by the Laptop specs I use at work (I upgraded it a bit):

And my home PC specs (bought it 1 year ago):

Well, now the screenshots...this is my Samsung display showing the paired and connected Bluetooth devices on my Laptop at work (MIGUELABREU-PC and the HUAWEI WATCH), the language it's in Portuguese but I think it's easy to identify the respective status on-screen (Portuguese text "ligado"=turned on and "ligado para chamadas"=turned on for calls):

This is my Samsung display showing the Bluetooth devices on my PC at home (MADLABS01) with the UB4A adapter (Portuguese text "impossível ligar"=impossible to connect):

BUT...if you go to the Windows Definitions and check for paired Bluetooth devices, this will show up: 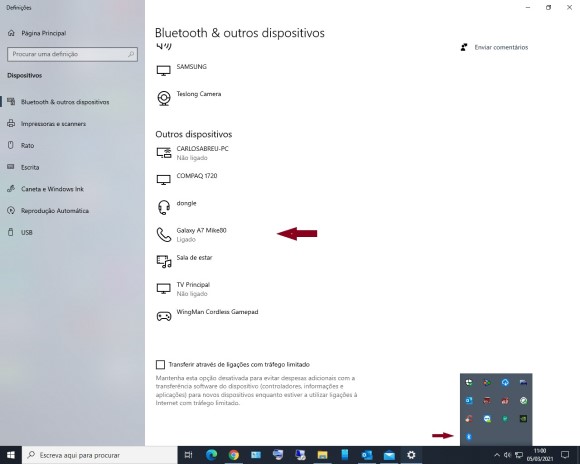 Even on the old Control Panel on "Devices and Printers" it shows up paired: 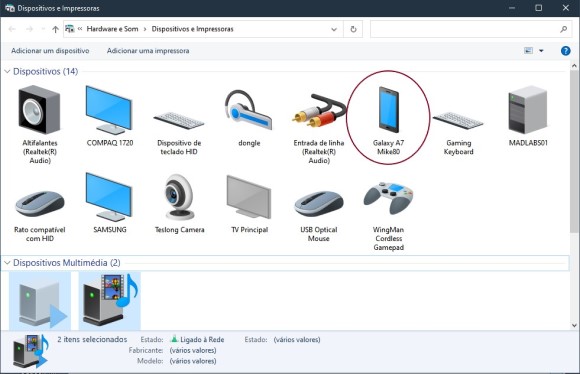 It's really strange...I sent the Samsung screenshots I took using the UB4A Bluetooth adapter connection with my PC at home and it works, so how come on the smartphone side it won't assume that is paired up and connected?? It seems it's working well on sending/receiving data but it won't establish a connection for the telephone calls or SMS notifications an text...

Stranger, on the Asus Laptop (with built-in Bluetooth, exactly the same version, v4.0) everything works wonderfully, if I want I can use the Laptop camera and microphone to receive/make calls or videocalls and use the keyboard to write SMS, it just doesn't make any sense why the UB4A adapter is not working in the same way!

Two days ago I noticed on Device Manager that I had two devices that required further installation with a question mark icon, both related with the adapter! one device had "SMS/MMS" indication and the other had "Ic_Service" so I went to the properties and copied the hardware Vendor/ID, then I googled it and found the missing drivers! I installed them and both device errors disappeared, a new device appeared under the Bluetooth expansion menu and on the properties but it still won't work as it should! (today after I turned off and turned on again the computer, the "Ic_Service" device error appeared again on Device Manager...witch didn't happened when I just did a reboot when I installed the drivers).

Resuming...what the hell is happening with this adapter?? In the "Quick Guide" manual it says the adapter is a "Plug and Play" device and that it doesn't needs any kind of extra drivers installation (except for Windows 7, if I'm not mistaken)...so, whats the problem here?? A six year old laptop detects everything and a one year new PC has problems with an USB/Bluetooth adapter that is practically new??

I really need help on solving this "situation"...

Sorry for the late update and we appreciate your detailed reply.

From the photo , Samsung A7 is connected to Huawei Smartwatch at the same time PC is paired to it.

Can you remove or forget  Huawei smartwatch on your Bluetooth device, and see if the Error is gone or not.

Btw, you mentioned that it could not make call via Microsoft APP or send SMS message, may I have some more information about this, thank you.

As the issue is a bit special, we'd like to follow up your case via email, please check your email inbox , and the title contains "【Forum ID 254944】" thanks.

Thanks for the tip regarding the mail, I did received that mail you mentioned but it went straight to my SPAM folder and I didn't noticed it...anyway, I already replied it (I just hope it isn't too late).

Regarding the issue....I've tried everything...unpaired everything, disconnected everything, deleted the device history connections and retried to do everything from the start...I keep getting the same kind of "response", the UB4A USB Bluetooth adaptor is recognized and installed without issues, the PC does recognize the the smartphone and it does pair with it but the only thing I can do it's send and receive files between devices, if I try to initiate or do anything from the smartphone side regarding calls or whatever I keep getting the same message "impossible to connect" (and in Device Manager there are two devices popup as not recognized, I guess it has something to do with the communications protocols between the smartphone and the PC because on the laptop those two devices do not show up as unrecognized)....

I need a break to put things on perspective...I've been a little busy at work (I'm a IT Tech and I spend all day around computers so when I get at home I try to "switch off" a bit) but I'll try to manage my time and compile some more info regarding the unrecognized devices and the Microsoft App situation regarding the calls and text messages.

This situation it will be followed up by mail from now on or should I keep posting my responses here anyway?